Every now and then, I uncover a 24-carat nugget that stands out from all the other gems. And “The Poppy War” by R. F. Kuang is one of them. 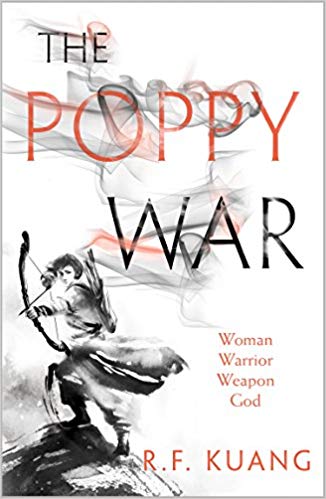 I read a lot of science fiction and fantasy. And by a lot, I mean over forty books a year on average. It’s not only because I love the genre, either – which I do, and always have. I think it’s due to the fact that I treat each journey into an author’s imagination as a treasure hunt, you see.

And it really is a treasure hunt. I mean, I’ve got a vivid imagination. You only have to take a look at some of the work I’ve published to see that. But taking a peek into someone else’s mind? Seeing what makes them tick? Uncovering the breadth and the depth of their particular psycho-multiveres . . . ? Ah, it’s like panning for gold in a mineral laden garden that, let’s face it, has become choked with weeds in recent decades. (Avid readers will know what I mean).

But it’s worth the effort, because every now and then, I uncover a 24-carat nugget that stands out from all the other gems. And “The Poppy War” by R. F. Kuang is one of them.

Fang – Rin – Runin is a war orphan. A girl forced upon a merchant family from a poor province in a society where class and station mean everything. As you can imagine, Rin in looked upon as a burden that the Fang’s want to offload as soon as possible.

Sure enough, the moment Rin reaches fourteen years of age, the Fang’s arrange a marriage for her. She is to wed a man twice divorced and three times her age. Little wonder, then, that Rin rebels. The Keju – an annual national test to find the brightest students in the Nikara Empire – is approaching. So Rin takes matters into her own hands. She’s a bright girl with a good mind, and through some artful maneuvering, manages to secure private tuition.

The trouble is, when Rin aces the exams, she finds her success is merely illusory; like fools gold. Why? Entry into Sinegard – the Empire’s most prestigious military school – doesn’t guarantee her troubles are over. Far from it. They’ve only just begun!

Prejudice, bitter rivalry, narcissism – from classmates and instructors alike, make Rin’s life a living hell. But this dark-skinned peasant girl with a strange accent from the south has one thing going in her favor. She’s not a quitter. And when she discovers she is one of only a few people in existence who can summon the power of the gods, well . . . events take quite a turn.

Alas, the gods are unpredictable; vast in scope; insanely passionate; impossibly cold and aloof. And when their majesty is brought to bear upon insignificant little humans, the results can be – and often are – catastrophic. Rin witnesses this firsthand when the Mugen Federation declares war upon Nikara.

Far from helping her take control of her own life, Rin finds her future thrown into jeopardy when an avenging god seeks to use her as its conduit onto the mortal plane.

As to how that goes, exactly, you’ll have to find out for yourselves. But in summation:

“The Poppy War” is a fantastically mystical story, operatic in scale, yet personal in its appeal, and one of the most entertaining, thoroughly gripping and satisfying journeys you will ever take through the pages of a book.

Prepare to have your perceptions altered.

Serial Box’s Orphan Black: The Next Chapter Is a Mostly Successful Experiment in Transmedia Storytelling

This week the UK London listings and entertainment guide Time Out published part of an on-going series of genre by genre features on the 100 Best Films. The current one is ‘The 100 best sci-fi movies’. Gary Dalkin takes a look…