Be careful about the terms and slang you use in your writing, it might not be historically accurate

I don’t have much to say on this topic, since I write science fiction romance set in the far future and I’ve invented my own slang for those characters. I also write paranormal novels set in ancient Egypt and the slang I use there is VERY old LOL. But it fits the time period. Actually, the problem I have in those novels is the reverse – I have to be careful not to use words and terms that reference inventions and innovations that won’t arise for thousands of years. I was rereading one of my old novels last night and found three gems I’d missed. No steel in 1550 BCE.  ‘Faux’ – even Old French didn’t exist that long ago. I don’t remember the third one at the moment. I usually change steel or iron to bronze, which doesn’t always flow smoothly to the modern eye, but I missed this one reference. 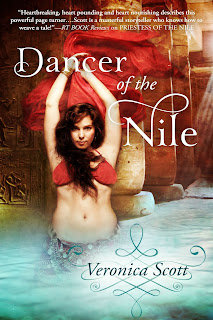 Here’s an encounter from Dancer of the Nile, not that it’s full of slang but I don’t know what else to give you today! Nima the dancer is prepared to gamble with some very high stakes…

“Are you a gambling man?” She pointed at the object taking
up most of the table beside him. “Do I see a senet board?”
He
rubbed his hand across the game board inlaid atop the gleaming container.
“Indeed it is. You play?”
As if
she had all the time in the world, Nima walked to the game box, deliberately
making her stride slow and sensuous, like the opening steps of a dance. Bending
to give him a good view of her shapely bottom outlined by the dress pulled
tight as she leaned over, Nima opened the bottom drawer of the case and plucked
a shiny black pawn at random from inside. With an elegant gesture, she turned
and extended her hand to the caravan master, the pawn sitting on her flat palm.
“I challenge you to a game.”
He
stroked his bearded chin, leaned back as he braced one foot on a trunk and made
a show of considering. “For what stakes?”
“If I
win, you give us shelter for the night, and we go our separate ways in the
morning.” She set the pawn on the board in the starting square. “If you win,
we’re yours to do with as you please.”
“Nima—”
Kamin’s protest was instant and angry. In two steps he was at her side, yanking
her to face him. “What are you—”
Wrenching
herself loose, she ignored him, facing Ptahnetamun again. “I’ve lived in border
towns all my life, so I’ve heard of the honor code governing caravan masters. I
want your word you’ll abide by the outcome of the game.” She held up one hand
before he could speak. “No, I want your blood oath on it.”
Jaw
dropping, Ptahnetamun stared at her while his men muttered and even the serving
girl looked impressed by Nima’s boldness.
“Well?
Do you agree to my terms or don’t you?” Nima drew herself to her full height
and tried to feel impressive, despite her dusty clothes and tired body. He can’t back down from this challenge in
front of his crew. I hope. Since he hesitated, she taunted him,
paraphrasing a saying she’d often heard in the taverns where she danced. “Be aware I’ll pass you by as one who
sails with the breeze, blessed by the Sun. I’ll be entering the House of
Repeating Life while you, my opponent, will
be stopped.”
Next
minute, Ptahnetamun threw back his head, roaring with laughter. “Spoken like a
true gambler. I like your spirit, woman.” He pointed at Kamin. “Does your
warrior agree to what you propose? The deal must include you both.”
“Will you
give us a moment?” Pulling Kamin aside, Nima turned so the gawking caravan crew
couldn’t see their faces. Kamin’s cheeks were red, and his frown was truly
impressive.
Putting
both hands on her shoulders, he gave her a little shake. “What in the seven hells
are you doing? “
She laid
her hand gently over his mouth, leaning close as she whispered, “Trust me,
please, Kamin? If he swears me a blood oath—”
Shoving
her hand away, he rolled his eyes. “And if
you win,” he said furiously. “The throwing sticks are bound to be false-weighted
somehow. It won’t be a fair game, not some friendly match in the tavern for
mugs of beer.”
“I’m
hoping the sticks are false.” She
smiled mischievously, letting her smile fade as he continued to glare at her.
“Please? I know the stakes are high, but we’re not getting out of here
otherwise. You’re one man surrounded by dozens, and he sees profit in selling
us. This is the only way we stand a chance of escaping.”
“You’re
asking me to risk the success of my mission for Pharaoh, for Egypt, on how well you can cheat a
cheater?” He closed his eyes for a moment, rubbing his brow.
“Blood
oath?” Ptahnetamun asked from his position next to the game board.
Going
on tiptoe to look over Kamin’s shoulder, Nima said magnanimously, “Nothing
less. I’ll swear as well,” drawing a quickly smothered laugh from the ever-increasing
crowd at her back.
“She’s
set the stakes.” The man who’d taken Nima on his horse came forward to offer the
caravan master his dagger. “Challenge has been made.”
“And
accepted!” Ptahnetamun slammed his cup on the table so forcefully the base
cracked. Rolling back his sleeve, he extended his thick wrist. “I swear by the
twin gods of the caravan road to abide by the outcome of this senet game. She
and her man go free in the morning if she wins.” He leered at Nima. “But she’ll
be on her back in my bed by dawn if I win.” The crowd roared with amusement at
this sally. Gesturing at Kamin, he finished his boasting. “Be sure I’ll sell
his carcass for a tidy profit.”

Nima’s beauty and skill as a dancer leads an infatuated enemy to kidnap her after destroying an Egyptian border town. However, she’s not the only hostage in the enemy camp: Kamin, an Egyptian soldier on a secret mission for Pharaoh, has been taken as well. Working together to escape, the two of them embark on a desperate quest across the desert to carry word of the enemy’s invasion plans to Pharaoh’s people.

As they flee for their lives, these two strangers thrown together by misfortune have to trust in each other to survive.  Nima suspects Kamin is more than the simple soldier he seems, but she finds it hard to resist the effect he has on her heart.  Kamin has a duty to his Pharaoh to see his mission completed, but this clever and courageous dancer is claiming more of his loyalty and love by the moment. Kamin starts to worry, if it comes to a choice between saving Egypt or saving Nima’s life…what will he do?

Aided by the Egyptian god Horus and the Snake Goddess Renenutet, beset by the enemy’s black magic, can Nima and Kamin evade the enemy and reach the safety of the Nile in time to foil the planned attack?

Can there ever be a happy future together for the humble dancer and the brave Egyptian soldier who is so much more than he seems?

E. Catherine Tobler, author of the up-coming The Grand Tour reveals where her love of carnivals has its origins

We all know that bookends are awesome. We also all know that there’s often little space on the bookshelf for them. But I implore you to consider picking up spare bookcases in order to add some of these incredible space bookends to your shelves. Not only will that spread your books out, but it’ll make […]