In this week’s viewing: The Ones Within examines family matters, Granbelm explains another motivation, and more! 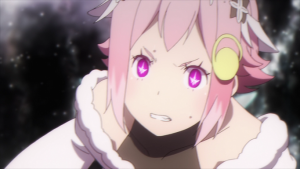 Granbelm #5 – The battle is on once again, and the plan to take out Nene almost immediately falls apart as Shingetsu and Kuon are distracted by other opponents. Nevertheless, Mangetsu powers through on her own and is able to win the day, ending with a glimpse of what’s been driving Nene.

In addition to having no known connection to one of the magical families, Mangetsu also stands out in her motivation. Everyone else is responding to a loss of some sort (except maybe Suishō, who might just have been insane to begin with). Mangetsu is the only one striving toward something new rather than trying to fix something.

But what exactly is she striving toward? When she powers up this time, she winds up swinging a sword that looks like it’s made of pure void. That does not look like an inherently good power. Indeed, both of her victories have come at the cost of someone else utterly losing their connection to magic.

But maybe her role is to break the old order so that something better can be built among its ruins. If so, hopefully she figures it out before going all in on destruction. 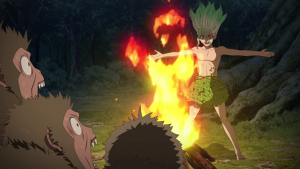 Dr. Stone #5 – With Senkū out of action, Taiju and Yuzuriha are forced to improvise an escape from Tsukasa. While they desperately search for a way to revive Senkū, the narrative vanishes down a flashback and things get very silly indeed.

I think it’s a good choice to show Senkū’s time alone a few episodes in rather than in chronological order. Now that we know more about him and can be more invested in him, it’s not as big an impediment to have the usual viewpoint character missing from the stage. The macaques and the video-game narration are excellent choices as well.

Taiju and Yuzuriha are, once again, perfect for each other. They may not have Senkū’s genius, but they are tough and resourceful enough to keep the day from being a total disaster. And they do manage to preserve one advantage— Tsukasa doesn’t seem to have realized there are other people around… 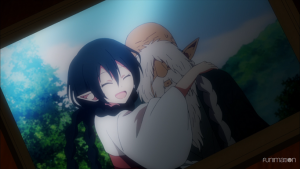 The Ones Within #5 – Trapped in the ogres’ hideout, Akatsuki is able to slip loose. Karin is left behind to face the unspeakably depraved fate that the ogres… well, actually, it just turns out Kikka has a very roundabout way of recruiting domestic help. It’s Kaikoku and Zakuro’s turn to shine as they rescue Karin from a life of service-industry drudgery.

Everybody has family stuff going on this week. Kaikoku broke ties with his traditionalist family (but not traditionalism itself, since his specialty is historical games). Zakuro is searching for his twin sister, who seems to have been kidnapped by the beta version of this game. And Kihachi is reminded that he accepted a role as an NPC in order to stay with his granddaughter forever.

So was Kihachi another person kidnapped from our world by the same game? Or another world? It’s implied that he isn’t a computer-generated character. And then Paca, too, seems to have had the option to leave at some point. So is he another earlier kidnap victim? Does this mean Sakura is trapped somewhere playing out a role in another game challenge?

Paca’s conversation with Akatsuki looks odd when it’s shown that they had it in front of a camera. Though Paca is hiding this from the other players, he seems to have no worries about it being public knowledge outside of the game. Is that his way of juicing the viewer numbers?

Or it could be that Paca thinks it might not matter one way or another what Akatsuki knows soon, with the mysterious debilitating condition that’s creeping up on him. Last week it was his feet going numb; now it’s complete loss of feeling there and being unable to use his right arm. Could be Yuzu is slowly poisoning him, but I suspect it’s actually the setup for the next challenge.