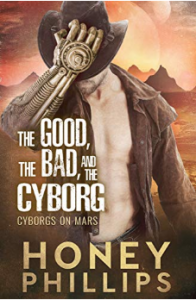 Science fiction romance author Honey Phillips has a knack for unique plots and stories that really resonate with SFR readers. I was delighted to have a chance to interview her about her new Cyborgs on Mars series. The Good, The Bad and the Cyborg is the first book to be released and definitely has that Wild West, frontier feeling of space exploration and colonization at its best.

Here’s the blurb: A desperate widow in need of a helping hand… even a cybernetic one.

Hattie came to Mars with high hopes. Hopes that she and her husband would be able to claim a plot of land, to create a home, perhaps even to start a family – all of the things that were now impossible on a troubled Earth. Instead, she’s lost everything, everything except the land, and in order to keep her homestead she needs help.

When help arrives in the form of a tall, gruff cyborg ranger, she is torn between her loyalty to the past and the promise of a new future. But when danger threatens, is she going to lose even that?

M-231 can barely remember the time before – before he became a cyborg, before he shut off his emotions, before he became both more and less than human. Until a stubborn, beautiful female – one who is no longer off limits – makes him remember what it is to feel.

Can Hattie and her cyborg overcome harsh conditions, troubled pasts, and a mysterious enemy to create a new future together?

Veronica Scott for Amazing Stories Magazine: What was the spark or plot prompt behind the Cyborgs on Mars series?

HP: Oddly enough, it was something that (USA Today Best Selling SFR author) Cara Bristol mentioned about a year ago when she said she thought people would be interested in Mars. I was like, hey, I’m interested in Mars!  I bet other people are too.  So I started thinking about what I would want to do with the Red Planet, and the combination of a frontier planet and cyborgs just came to me.  It was one of those lightning bolts of inspiration that immediately felt right.

ASM.: What do you think the overall appeal of cyborgs is to science fiction romance readers?

HP: I think it’s a mix of things.  Aside from the intriguing combination of human and technology, I think readers appreciate the fact that the cyborgs have struggled, that they haven’t had easy lives, that they are physically tough but still emotionally fragile.  They like the fact that these guys are strong and powerful and want to use that strength to protect their women.  And once they find that woman, they are absolutely loyal.

ASM.: What were your major influences or inspirations when writing The Good, The Bad and The Cyborg?

HP: My first influence is the classic A Princess of Mars by Edgar Rice Burroughs.  I read that as a teenager and was entranced by the idea of a desert planet full of strange exotic races with a swashbuckling hero and a heroine for whom he’s literally willing to give up his world.  It firmly established the idea of Mars as a land of romantic fantasy in my mind.  The Cyborgs on Mars are a much grittier version of that fantasy.

Of course, I have to mention Firefly and Serenity.  (And yes, I’m still bitter that the show was canceled!) Aside from the fact that I am a huge Joss Whedon fan, I love the way he combined technology with a western vibe.  This just appeals to me on so many levels because technology doesn’t magically make everything clean and shiny the way it’s portrayed in so many scifi movies.  I love the grittiness of people struggling to survive under harsh conditions, despite technological advances.  My settlers are facing many of the same challenges as the the original homesteaders, even if they arrived by spaceship rather than covered wagon.  Mal is such a great hero too – a little damaged and with a troubled past, but still guided by his own moral code, all of which fits with my cyborgs. 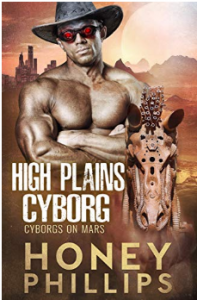 Finally, if it wasn’t already obvious by the fact that I named my first cyborg hero Clint (in the prequel, High Plains Cyborg), Clint Eastwood was also a major influence!  I love the part he plays in so many of his westerns – the tough, sexy outsider riding into town alone.  He usually ends up saving the day, although not always in the expected way.  Those characteristics play so well with my cyborg heroes.  Of course, Clint frequently rides off alone.  My heroes have much more romance driven story lines and they tend to be saving the day for a very specific heroine!

I have to give honorable mention to some other influences as well, ranging from Yul Brynner as a robot gunslinger in the original Westworld movie to Daniel Craig searching for answers in Aliens and Cowboys!  As a side note, I did think about having aliens on Mars, but I like the challenge of dealing with human – and not quite human – characters in this series.

ASM.: Now that we know some of your favorite movies is there a TV show you’ve recently binge watched?

HP: I don’t actually watch a lot of TV, but one of my favorites is Midsomer Murders.  The combination of grisly murders and beautiful English countryside just appeals to me and I can watch multiple episodes.  I do have The Witcher on my list.  Because, Henry Cavill!

ASM.: Who is your cover artist? If you do the covers yourself, can you share a bit of your process with our readers? What inspires you to pick the images, for example?

HP: Unfortunately, I don’t have the skills to create the covers myself.  But I had a very specific vision of what the Cyborg on Mars covers should be and Pro Book Covers did a great job of bringing them to life.  In this case, I wanted the colors of Mars and the feeling of a desolate planet; I wanted the combination of Old West and technology.  Not to mention that scrolling through pictures of sexy cowboys to find the tight model was hardly a chore!

HP: More cyborgs!  There are more tortured heroes who need their happy endings. I’m working on the Judge’s story now and loving it! Then I’m planning to go back to the Alien Invasion world where spoiled twin sisters are going to meet their matches.  I also plan to revisit the Alien Abduction series and here’s a small hint, just for your readers, Hannah and the Hitman is next! Plus I have other worlds I would love to explore – too many ideas, too little time!

HP: Way too much!  The only downside of writing is that I have less time to read.  But I am highly anticipating Naomi Lucas’ Six Months with Cerberus.

For more about Honey Phillips and her books visit https://www.honeyphillips.com/