On Easter weekend (Good Friday, I guess, though my churchgoing days are long gone), the Beautiful and Talented Lynne Taylor Fahnestalk and I packed a suitcase and headed down to the Canada/US Border, aiming for SeaTac, Washington and the 42nd iteration of Seattle’s Norwescon. (It’s not really the 42nd, because there have been several 1/2 Norwescons in the past. But we’ll go with 42.) I had, on the previous day, packed Chester the Fat Boy into his cat carrier—ask me about that ordeal sometime—and taken him to the vet for boarding. I also brought my Canon DSLR, with every intention of taking lots of con photos, as well as my little Fuji 3D “point and shoot” camera (I’ve mentioned before that I have loved 3D since the 1950s, when I was a kid). I also packed a bunch of Amazing Stories badge ribbons and some “limited-edition collectible” Amazing Stories pins, all courtesy of Steve “The Guy” Davidson, publisher of this blog and the print Amazing Stories magazine.

You may not know that Vancouver, British Columbia, Canada, where I live with my wife, the B&T LTF, and my insane fat cat Chester, is about 250 km (155 miles) from SeaTac, give or take. Under normal circumstances, it’s about a four-hour drive. So I figured that if we leave around 7 a.m. we’d be there by noon. We left the house around 7:15 a.m., stopping briefly to pick up breakfast sandwiches to eat on the way, and to fill the tank; arriving at the border shortly after 8. Long story extremely short, we arrived at the hotel about 3:35 p.m., way too late to get parking (the lot was full, which is what happens at Norwescon). So I parked across the street at “Wally Parking” (I keep seeing Chevy Chase in my mind), which cost me an additional $40 US on Sunday. What a wonderful start to a convention. So Friday programming was pretty much shot.

That kind of set the pattern for me for the weekend, because I spent the entire weekend with a migraine (yes, the same one all weekend. Went to sleep with it, woke up with it). Figure 2 shows one of the first friends we saw, Thom Walls (here looking at me rather skeptically), who has also taken con photos. Many, many great con photos. For whatever reason, I ended up leaving the Canon in the room, and only took a few photos with my Fuji, which takes a 2D picture at the same time it takes a 3D photo, so I can share most of my photos with you. Lynne was able to go to a number of science panels, which she raved about afterwards, like the 50th anniversary Apollo panel. But I spent my convention mostly talking to people, like my friend Tamara Vining (Figure 3), who’s a writer and feminist. In fact, all of the few photos I took were of friends who are in one way or another activists.

One notable feature of Norwescon is the hall costuming; there was a lot of it, but I didn’t take any photos of it. If you check my photos from last year I think I posted a few. If you’re on Facebook, you might check out the Norwescon group; there are some costume photos there (click on name for link). I also missed the Masquerade, which has traditionally been a very strong one. Another feature that Norwescon is rightly famous for is the Art Show. Of course, I couldn’t take any photos there, but I have to tell you that this year was, in my opinion, the best art show Norwescon has ever had; in fact, it rivalled many Worldcon art shows that I’ve seen in terms of quality, skill, and professionalism. Besides the pros (like Mark Ferrari, Douglas Herring, Lee Moyer, and AGOH Tran Nguyen, to name only a few) who are usually present at a Norwescon art show, I saw terrific work from people I’ve never heard of (not that I’m up-to-date on who’s doing SF/F art anymore), like Stephanie Cost, Bruce Brenneise, and Lauren Blake, among many others—and these are only the 2D artists! 3D art abounded, like David Lee Pancake’s (the dragon in the vent was priceless), lots of jewelry, glass—both etched and handmade, sculpture, (including Lynne’s “bot” sculptures, one of which was Roy—Figure 4)… there was too much art to mention it all here, and I’m sure someone I didn’t name will be insulted that I didn’t. That’s not my intent, so I hope all the artists take the few I’ve mentioned in the spirit of “just a sampling.” And while I’m at it, I should mention Rob Carlos (Figure 5), who’s going to be the Art Guest of Honour for next year’s Westercon, which will be held in Seattle.

But aside from the Art Show and the Dealers’ Room (where I managed to only spend $10 plus tax! A first for me!), I spent the majority of my convention time in the bar, because the dang Doubletree Inn is too shortsighted to keep the restaurant open all the time. (When Norwescon was held there in earlier years, the restaurant/coffee shop was open all the time. I believe their policy of only opening it for morning and a few hours in the evening is costing them money. But maybe I’m wrong.) Anyway, since I began going to cons in 1975, the bar has been a traditional place to meet people. (Back then, it was where you found a greater number of pros in one place; alas—time has marched on, and many fans and pros no longer drink, or drink as much, alcohol. And a very large number of us have either quit smoking, or been forced to quit.) True story: while sitting in the bar, Lynne and I noticed a woman wearing a polka-dot dress, with kind of a retro hairdo, and wondered if she was doing a Doom Patrol Elasti-Girl thing. Nope… it was the writer GOH, Mary Robinette Kowal, just doing a Mary Robinette Kowal thing.

The problem with having a major headache for most of the con is that I didn’t feel like going much of anywhere or doing much of anything—but I refused to just take a pill and go lie down in our room. Part of that was that our room was kind of like Bilbo’s quest There And Back Again—we had to go down one very long corridor to the end, then outside, then back up into one of the rooms where the gamers were all talking in very loud voices; through that room and 3/4 of the way down another long corridor. I have wondered why people pay $50 or more for a membership, then spend it shut away from the convention action for most of the convention… but I realized that except for where I was, this is exactly what I’d done thanks to the migraine. And as far as going outside to get to the other wing, Lynne (the B&T) found that we could avoid that by going up in the elevator before we got to the end of the first corridor (just past the Free Book station), across the enclosed bridge, through the large room containing the online gamers—this room was full of very large monitors, all displaying various game stats—and down the other elevator to the original room full of board gamers and thence to our corridor. Apropos of nothing, here’s a photo of my “kid” sister Starshadow (yes, that’s her legal name) at the con. Also By The Way, the Free Book area was terrific—dozens of absolutely free hardcovers, paperbacks, and magazines (older and recent F&SFs and Analogs). An idea more cons should adopt!

Earlier, I mentioned hall costumes; for those few of you who either don’t attend conventions or haven’t yet attended one, a “hall costume” is a costume that you wear around the convention with no intention of wearing it into the masquerade. People can either throw together something for a hall costume (for example, the “Arthur Dent” look from Douglas Adams’ Hitchhiker’s Guide to the Galaxy just requires you to wear pajamas and a robe and carry a towel.) Some people do put a lot of effort into their hall costumes, up to the level of actual cosplay. But the largest amount of effort is usually for the masquerade; at the Worldcon you’re likely to see costumes that people have worked on for a year or more; I was unable to see this year’s masquerade, which I regret. Norwescon has an area set aside for photographing costumes, which I applaud. Here’s a picture of some Thermian hall costumes (from the movie Galaxy Quest): from the left are Nels Satterlund, Bernie Strub, and Deborah Strub. A few Thermians aren’t in the picture right now.

Another very good reason for going to Norwescon is to meet friends that I’ve made through science fiction; some through conventions like Norwescon, some through beginning a couple of writers’ groups, and some through fan groups like the Palouse Empire SF Association of Pullman WA and Moscow ID (PESFA), that put on the late, lamented MosCon. If you click the link, you’ll be able to sign up for the MosCon Revival being put on by Kathy Sprague.

I have to confess, I started both PESFA and MosCon; although they were both my idea, I had lots of help from people like the late Jon Gustafson and Vicki Mitchell (Gustafson), Nina Kiriki Hoffman, Amy Thomson—all of whom, incidentally, were or are writers and award-winning writers—as well as Nels Satterlund and his sister Lisa Satterlund, Mike Finkbiner and the late Beth Toerne, and a host of others. I will close out this column with a couple of photos of writers: Amy Thomson, ex-PESFAN and award-winning author of Virtual Girl and others (Figure 8); and Mark Rounds (with his wife Susan Rounds), author of the Plague Years trilogy and other books. Amy is a Seattle-area writer, and Mark lives and writes in Idaho (Figure 9). 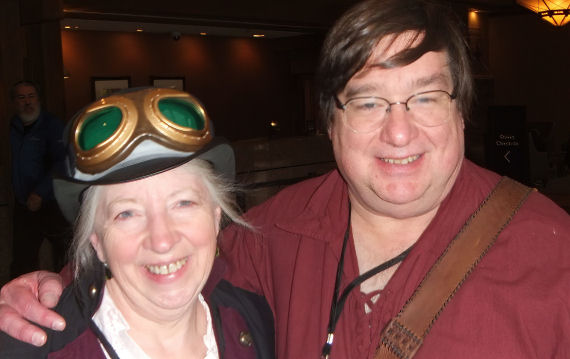 To round out the column, I want to talk a little bit about Steven Barnes (Figure 1). You may know him as a writer (Street Lethal, Lion Heart, co-author with Larry Niven and the late Jerry Pournelle of several novels, etc.) and the husband of a writer (Tananarive Due); you may even know him as a martial artist; he has spent much of his life studying martial arts. But what you may not know about Steven Barnes is that he is an accomplished life coach (and expert on Afrofuturism). He spent much of Norwescon helping and coaching people at the convention; I spent an illuminating half-hour or so with him talking about Hollywood and racism (I hope to bring part of that talk to my print Amazing Stories column). I have known a number of famous authors, and have been privileged to be good friends with a few, but I have to tell you that I feel extremely privileged to be able to talk to him one-on-one. If you ever have a chance to, check out his lifecoaching through the link I posted above.

Please comment on my column. I enjoy reading about what you think of my ramblin… er, intelligent discourse. You can comment here or on Facebook, where I have my own page, or in the Facebook pages I link to. All comments, positive or negative, are welcome! (Just keep it polite, okay?) My opinion is, as always, my own, and doesn’t necessarily reflect the views of Amazing Stories or its owner, editor, publisher or other columnists. See you next time!