4eBarbarian Cyborgs! Well, not exactly, but barbarians and cyborgs do feature in this roundup of the latest SF Romance releases 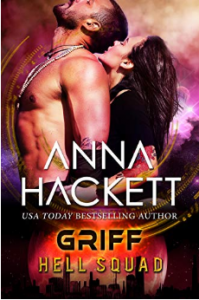 There was a plethora of new science fiction romance releases in the past two weeks and I’m happy to share some with you.

USA Today Best Selling author Anna Hackett released Griff, the 17th book in her post-apocalyptic series Hell Squad, set Down Under, with dinosaurlike aliens. I admire the way she keeps changing up the plots to keep the series fresh. Here’s the blurb: As the battle against the invading aliens intensifies, a group of bad boy bikers and mercenaries will stand and fight for humanity’s survival…

Squad Three berserker Griff lived through hell long before the alien invasion. Once, he’d been a dedicated cop, but then in a gut-wrenching betrayal, he ended up behind bars in a supermax prison. After the aliens invaded, he managed to escape and join the soldiers fighting back…and came face to face with his best friend’s little sister–the bold, vibrant, off-limits woman he’s always wanted. Now the beautiful, tattooed Indy is his squad’s comms officer…and she hates his guts.

Indy Bennett lost her parents and brother in the alien attack, and every day, she vows to suck the marrow out of life. She’s also doing her bit in the fight, as Squad Three’s comms officer, even if it means seeing the man who broke her young heart. Griff was once her brother’s best friend, a boy she adored, but now she knows she needs to steer clear of the hard-edged man who still draws her like a moth to a flame.

Griff vows to claim Indy as his. The only problem is, Indy is having none of it. As their fiery attraction explodes, they find themselves embroiled in the hunt for the aliens’ unexplained octagon weapon, and a mysterious survivor town where all is not what it seems. Both Griff and Indy will have to learn to let go of the hurts of the past if they have any chance of not just surviving, but having a future. 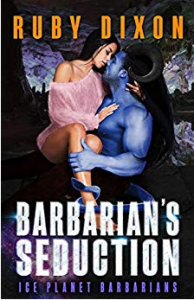 Speaking of changing up plots and stories, Ruby Dixon keeps her Ice Planet Barbarians series hot and has released book 20, Barbarian’s Seduction. The plot: Marlene’s not like the other humans. They weep while she smiles. They look at us with fear, while she entices me with a come-hither look.

I…have no idea why such a bold female resonated to a male like me. I am the most reticent of all the sa-khui tribe, a hunter that never expected to have a family of my own. But resonance chooses, and it has chosen her for me. And Marlene is quite determined to seduce me…and who can say no to such a woman? 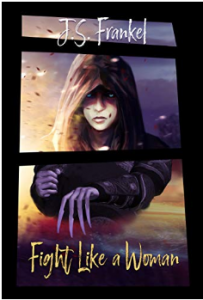 The title of J. S. Frankel’s new Young Adult science fiction book caught my attention – how could I ignore Fight Like A Woman? (This book was released at the end of February.) The plot is intriguing and complex: Meet Kyle Sorton, teen, orphan, living a life of no purpose on a space station. Occupation: janitor. Future prospects: none. His only dream is to be someone. Anyone will do.

Wish granted–sort of. An accident aboard his space station forces his flight, and his ship crash lands on an unknown world. Mortally wounded, he uses an experimental healing device called a Clavator to transfer his consciousness to the body of an alien woman. When he awakens, he discovers that this woman not only has special abilities, but that parts of her consciousness still exist. Even more surprising to him is the fact that his new host, named Rinarra, is married to Merat, another woman. She is understandably upset over losing her wife, and initially rejects the new Rinnara.

Confusion reigns, and compounding his problem of understanding his new form is the existence of a hostile alien force known as the Droogs. Large, purple, and utterly evil, Droogs care not about any lives other than their own. Kyle, who slowly begins to not only identify as Rinnara but also to fall in love with Merat, decides to fight the invaders. Windeeri has become a home, and she’ll defend it, even at the cost of her own life. 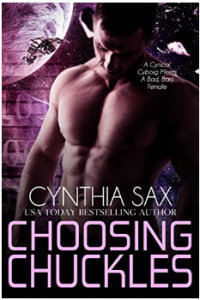 The cyborg tale for this post is something new from USA Today Best Selling author Cynthia Sax, Choosing Chuckles, the first book in her Cyborg Space Exploration Series. As I always say, this author writes really steamy stories and with darker themes than I usually read (as she says, “Beings die”, but not the hero or heroine!), but I always put her books on my kindle anyway because she spins good tales. Chuckles, the cyborg hero, acquired his name because He Is Deadly Serious at all times. He grows on you as you make your way through the book. The story: A Cynical Cyborg Meets A Bad, Bad Female.

Chuckles hates all humans. In the past, humans betrayed him. That treachery caused permanent damage to his muscular form, resulting in a lifespan of pain.

When the primitive D Model cyborg answers a distress call sent by a pink-and-blue haired, sparkly human female, he knows it’s a trap. He still has to respond to her fake cry for help. She belongs to him, is the one being genetically fabricated for him. But he plans to be her captor, not her captive.

Bettina, aka Bait, works with a team of females, snaring sexual predators in space, seizing their ships and transporting them to primitive planets. As soon as she speaks with Chuckles, she knows he’s not like the others. He has honor, is a being worthy of respect, of caring.

But she can’t let him go. She has to trap him. His dominance thrills her. His deep voice evokes desires she’d never experienced in the past. She’ll risk it all, breaking every rule for one wild encounter with the male she calls Sir. 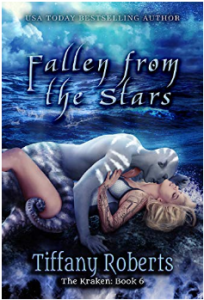 USA Today Best Selling author Tiffany Roberts released the next book in the Kraken series, Fallen From the Stars (Kraken Book 6). I thoroughly enjoy this series and can even overlook the Kraken being half octopus (tentacles aren’t usually my thing) because the characters are so well done. The blurb: Vasil has spent his life serving the needs of his people, denying his own desires — until a star falls from the sky. He follows its fiery trail and finds the unexpected: a mysterious human female. She is his chance at having the mate, the family for which he’s longed. But when he discovers her connection to the organization that created and enslaved his ancestors, he must decide if claiming his happiness is worth the risk of exposing the kraken.

Stranded on an unknown planet, Theodora Velenti has limited supplies and no way to call for help. Hopeless, the arrival of a half-man, half-octopus alien doesn’t seem like an improvement. But despite his differences, Theo finds herself drawn to him. Giving in to Vasil’s advances means accepting that the life she knew is gone forever. Can she give up a chance of rescue or is what she and Vasil feel for each other real? 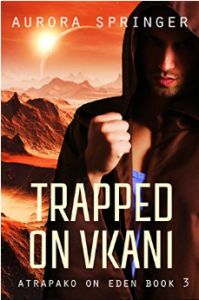 Author Aurora Springer does amazing worldbuilding when it comes to the details of the planets and the beings who inhabit them and her Trapped on Vkani (Atrapako on Eden Book 3) is the latest example. The plot: Marooned on a desolate planet, joining forces with the enemy is their only hope.

Maya Pandita spent years preparing for an expedition to the Deadlands. But her dreams of unearthing ancient artifacts are shattered when her shuttle is buried by a violent sandstorm, and her team is abducted by the scaled inhabitants of the planet. Maya and her companions must try to outwit their blue captor and call for help before they die in the toxic atmosphere.

Sa Vittaran has a problem in his claws. Along with treasures from the ruins, he has retrieved three smooth-skinned foreigners. He cannot leave them to die in the desert. Yet the puny creatures have little value as workers, except perhaps for the impudent woman who claims to be their leader. Her knowledge of the ancient script will be an asset if she can survive the long trek to his house.

An attack by marauders forces Maya and the Blue leader into a wary alliance. They must work together to thwart the bandits and reunite their company. Can Maya convince Sa Vittaran to help her team? If she fails, they are doomed to a short unpleasant life on the desolate, war-torn planet. 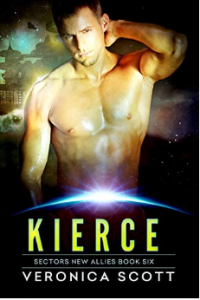 I’ll close with the latest from yours truly, Kierce: A Badari Warriors SciFi Romance Novel (Sectors New Allies Series Book 6). Here’s the story: Elianna McNamee, spaceship engineer, is far from her home in the human Sectors, kidnapped along with all her shipmates to be used for horrifying experiments conducted on a remote planet by alien scientists.

Her captors decide to toss her in a cell with a ferocious predator, expecting him to kill her…but Kierce, the Badari warrior in question, has too much honor to mistreat a human woman. The trouble is, he’s trapped in a form drastically different from his own as a result of twisted genetic meddling and hiding dark secrets to save other Badari lives.

Able to become a man again briefly with Elianna‘s help, he and Elianna bond over their mutual hatred for the enemy but when rescuers finally arrive, the pair are separated by well-meaning Badari authorities.

Kierce struggles to overcome flashbacks from the torture and drugs the alien scientists inflicted on him. He and Elianna despair over whether he’ll ever be able to regain his rightful place as a man and a soldier in the pack, much less be ready to claim a mate.

Elianna accepts a risky but essential assignment far away from where Kierce is being held, working with another man who’s more than professionally interested in her. Her heart belongs to Kierce and she can’t forget their two nights of shared passion but will that be enough to lead them to a happy reunion?

See you in April with more suggestions!

China’s hypersonic plane, known as the I-plane, is currently being tested in a wind tunnel at speeds over 3,800 miles per hour. Source: China’s Hypersonic Plane Travels From Bejing to New York in a Few Hours

Baby poop capsules: Coming soon to a pharmacy near you?