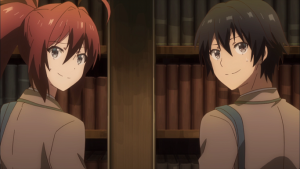 Isekai Cheat Magician premiere – BFFs Taichi and Rin are pulled into a gamelike fantasy world where they will turn out to be massively overpowered, gather a party of adventurers, and pwn enemies at will. In fact, they’re doing just that in a flash-forward at the beginning of this episode, but then it feels a need to jump back and relive every plodding step on their journey.

How bland is this show? Bland enough that the adventuring party is suffering an all-gender outbreak of Same Face Syndrome. So bland that I cannot identify even a trace of a single original thought anywhere in its vicinity. The fantasy world is exactly the same one as every other vaguely medieval fantasy anime, portal fantasy or not. There’s the same adventurers’ guild setup and terminology as in any CRPG. Rin and Taichi have no personalities or chemistry.

There is no reason to watch this show other than mad scientists have imprisoned you and are forcing you watch it. 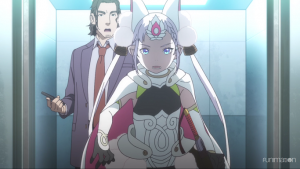 Cop Craft premiere – On the grim streets of San Teresa, Kei Matoba is having a rough couple of days. First his partner is killed in a sting gone wrong, and then he’s assigned a new partner who isn’t even human. Tilarna is from the alternate magic dimension (or alien world, the story doesn’t seem to have made up its mind) on the opposite side of the portal that opened near San Teresa fifteen years ago. Can Kei track down his partner’s killer while saddled with a clueless foreigner?

Cop Craft boasts the slickest and most stylish animation this season, even outdoing Fire Force. But it is a beautiful skin suspended over an empty void where the structure of the world should be. It goes through all the motions without any sense of why these things are this way.

Consider, for instance, Tilarna, who has an effortless fluency in the local language and yet no knowledge of any of the societal structures embedded in it. Two million of her folk live in San Teresa, a treaty has been negotiated regarding her people and humans working in each others’ jurisdictions, and yet everyone acts like this is the first time it’s ever happened. When Kei finds out he’s supposed to help Tilarna track down what was at the center of the sting, he has the standard scene of protesting his new assignment and wanting to just find his last partner’s killer, despite the fact that these are exactly the same investigation.

Additional cop-show borrowings include Kei being able beat up whatever random people he likes on a whim without worrying about consequences, and black and Hispanic people only existing as criminals. Does it sound like this show is everything that’s wrong with cop shows? It’s quite a few things that are wrong with fantasy anime, as well. Like that Tilarna is set up to oscillate between a highly competent fighter and helpless, childlike eye candy. I give this until episode 5 to reveal that she looks 15, but is actually 200 years old, so romance is totally in the cards.

Anyway, this is a pretty face hiding a terrible show. Skip. 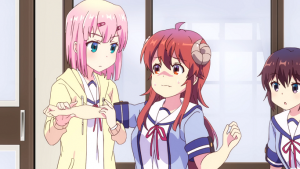 The Demon Girl Next Door premiere – Yūko Yoshida’s powers awaken one night with a mysterious dream. Her mother tells her of the family’s history, and how Yūko can achieve great things if she defeats one of their ancient enemies. Yūko’s sister and best friend are all ready to support her. The catch is that the Yoshidas are demons, and Yūko needs spill the blood of a magical girl.

Actually there are several catches. Yūko doesn’t seem to be manifesting anything yet other than horns and a tail. She’s always been a weakling. And Momo, the local magical girl, is just too nice for Yūko to work up the necessary hate for her. Before long, Momo has taken pity on Yūko and is offering her combat tips.

This parody doesn’t have a mean or creepy bone in its body. Everybody in it is basically decent, and even as it’s taking tropes apart it radiates a real love for the magical girl genre. Probably not something I will continue writing about, but very pleasant. 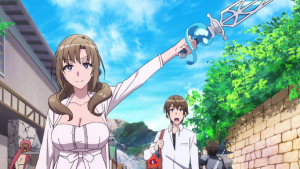 Do You Love Your Mom and Her Two-Hit Multi-Target Attacks? premiere – When an earnest civil servant offers Masato Ōsuki the chance to jump into a game world, he accepts without hesitation. A few keystrokes, and there he is in a fantasy world inside a computer, ready to gain awesome powers. It’s a dream come true… for a few seconds. And then his mom turns up, not just helicoptering but completely outshining him in combat.

Mamako Ōsuki is a little vague on online game concepts (though she seems to have been conversant with the games that were around when she was a teenager) but she’s determined to have a grand adventure that will let her bond with her son. The main obstacle is that Masato, as a typical teenager, is not on board with this idea. Furthermore, Masato is smart enough to figure out quickly that something is fishy about this whole setup.

Apart from the family dynamics, the show finds time to gleefully poke at the whole trapped-in-a-game genre. Masato’s knowledge of fantasy cliches is put to good use. A lot of comedy mileage is gotten out of the fact that the game is in beta. It also doesn’t hurt that this game world sometimes looks a lot better than many of the ones it’s making fun of.

This is a fun ride so far, and definitely worth a second look. 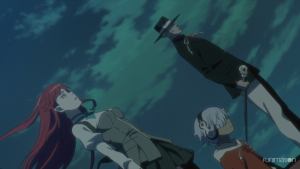 BEM premiere – Sonia Summers called out her superiors, and is paying the price with a transfer to the slums of Outside. There she finds poverty, lawlessness, a whole police department on the take, and a bizarre supernatural killer. Even more bizarre is what’s on the killer’s trail: monsters who fight other monsters, aspiring to become human.

First, yes, the title is a direct borrowing from the old fannish term, which somehow crossed to Japan in the 1960s when the first version of this show was created. The franchise has had multiple remakes and spinoffs since then, but none appear to have made it into English before.

With the exception of a monster whose design looks very 1960s, the aesthetic is much like the Batman animated series with a slicker polish: muted colors, high principles colliding with grey morality, lots of broody conversation on top of landmarks. As a gritty cop drama, it’s already a far better one than Cop Craft.

This episode has a lot of work to do, introducing major characters, setting out the basic monster-hunting structure, and introducing multiple factions lurking in the shadows. It does all this without feeling hurried, and looks and sounds great along the way. I don’t know how well it’s managed to preserve the spirit of its predecessors, but it has me wanting to see more.

And that’s it for the premieres. BEM and Do You Love Your Mom… will be back next week for a second look as we finalize the lineup for the rest of the season. (Although if BEM still isn’t available to Australia and New Zealand by then, it will not be allowed in.) Speaking of which, it’s time for a second look at some of last week’s… 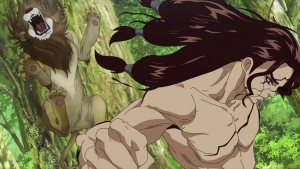 Dr. Stone #2 – Not only has humanity been returned to the Stone Age technologically, it has to face Stone Age problems like being eaten by lions. This leads to a snap decision to revive the world’s strongest high schooler. It seems like a good idea at the time, but when he reveals his ambition to create a new world free of all undesirables, Senkū and Taiju have a bigger problem on their hands than mere lions.

Taiju’s job in this story is to serve as the audience stand-in. With Senkū, he serves as a Dr. Watson, allowing the genius to explain his ideas. With Tsukasa, Taiju is a channel for the initial awe at his amazing fighting skills— after all, Shōnen Jump‘s specialty is stories about heroes who want to be the strongest, fastest, etc.— until the revelation that he is up to no good.

Senkū’s solution looks like it will involve something that looks suspiciously like a crossbow and that mysterious fourth use of calcium carbonate. What could it be? Well, one thing it’s still used for today, and which has already been mentioned in passing, is the making of high-quality steel.

So it looks like we have a villain and a philosophical conflict (probably soon to turn physical) to go along with the science education. This definitely looks worth following for the rest of the season. 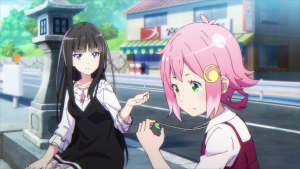 Granbelm #2 – For once in a kid-centered story, Mangetsu’s parents and the police are on the ball. Facing some awkward questions, she constructs a cover story which lets Shingetsu take the blame. This gets even more worrying in light of her eventual reason for continuing to participate in the tournament: pursuing power simply because she can.

This is how you get dictators. On the other hand, even if it isn’t a noble reason, it’s an entirely believable one for someone in Mangetsu’s situation. Given how Granbelm is already taking pains to show how the competition is warping the personalities of most of the other girls, I’m willing to believe that it will eventually demonstrate how terrible Mangetsu’s motivation is. Let’s put this one on the list too. 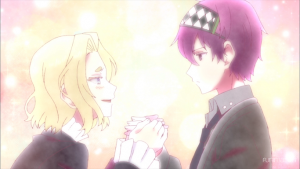 The Ones Within #2 – The next challenge is an unholy cross between a dating sim, a creature-raising game, and, just because why not, The Tale of Genji. This allows the nurturing and dating specialists to take some of the spotlight off of Akatsuki, and also enables commentary about how screwed up some dating sim scenarios are. Meanwhile, other members of the team get to experience reality-show creepiness as it turns out that what they’re up to in their spare time can also raise the viewer numbers.

The punchline to the hot tub scene feels like the show trying to excuse itself for having the hot tub scene in the first place. Still, it makes a point which may contribute to its overall look at YouTube economics. Meanwhile, more questions than answers are being raised. What is the deal with the chromosomes? What’s Route 13, and what did Mr. Paca mean about “you Route 13 people”? Is it Japan? Earth? Our reality? What did Zakuro and Kaikoku find when they followed Paca?

In addition to the mystery, it looks like The Ones Within will be delivering a solid jolt of weirdness every week. That’s more than enough to keep coming back for. 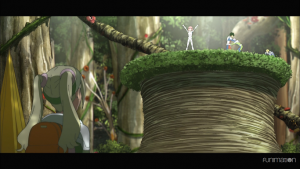 Astra Lost in Space #2 – The first stop for the Astra is a planet covered in completely unknown, potentially dangerous flora and fauna (you would think the encyclopedia the ship apparently carries would include some notes on what’s poisonous or dangerous), so everyone proceeds to poke and prod things at will. Luckily no one is killed, but Kanata is handed an opportunity to get everyone talking about how awesome he is again. Meanwhile, evidence leans even further toward it all being a setup.

In conclusion, what the heck, Seiun voters. 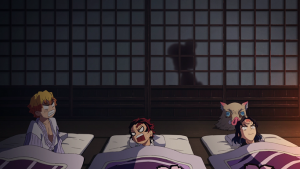 Demon Slayer: Kimetsu no Yaiba #14 – The question hanging over this from the end of the season is, does it tone Zenitsu down? The answer not only no, it’s added another shouting, oxygen-draining regular with Inosuke, the boar-headed boor. Now every conversation takes five times as long as it needs to and an entire episode is spent on people screaming at each other.

I mentioned Captain Awkward before in connection with Zenitsu. Her theme for 2019 is that people should not pour more energy into relationships that aren’t working. With that principle in mind, it’s time to flee. Demon Slayer got off to a great start, but no amount of art is worth this.