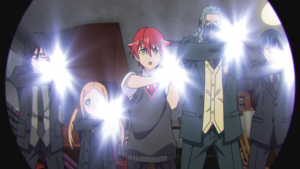 SSSS.Gridman finale – Akane herself has become a monster for the final battle, and, despite Alexis’s contention that she always was one because of the things she’s done, everyone jumps in to rescue her. Inexplicable new powers are developed, callback to the original live-action Gridman are tossed about with gay abandon, monumental amounts of collateral damage are committed, and when it’s all over, the world is tidily reset and rebuilt. Gridman, his weapons, and Akane go their separate ways, and Akane’s world is left to grow in peace. It’s everything one could hope for from the ending of a giant-monster-fighting series and more.

SSSS.Gridman has given us two of the best characters of the year in Akane and Anti, and it’s gotten good enough overall in this final stretch for me to become deeply unhappy about the amount of time it spent sexualizing its teenage girls earlier. If it could have just not kept framing Akane suggestively, and not spent most of one episode homing the camera in on every bosom and butt available, this could easily have been on my list of best shows of the year. As it is, I can’t recommend it to anyone who hasn’t been desensitized to that sort of thing from watching a ton of anime, which means I won’t recommend it to anyone at all. 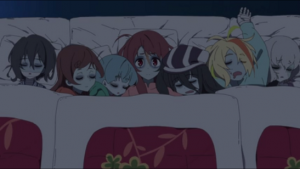 Zombie Land Saga finale – Sakura continues her self-destructive sulk despite everything from Kōtarō’s pep talks to Tae’s best efforts, until it’s finally pointed out to her that, having all died young, nobody else in Franchouchou has been especially lucky either, so could she please snap out of it and just try. So the concert is on, even despite a bomb cyclone crashing it and half destroying the building, because Sakura has resolved now to keep going no matter what.

It’s a completely safe and predictable ending for an idol show, and in that respect, Zombie Land Saga has done an entirely competent job. It has hit all the necessary plot points, it has promoted Saga Prefecture in the way it clearly wanted to, and it has delivered the necessary feel-good ending (though with obvious loose ends in the hope of another season).

Its only real problem is that it set much higher expectations at the start. We got on board this train because it promised a wickedly funny satire of the idol industry. Being merely a good idol show is a big disappointment. 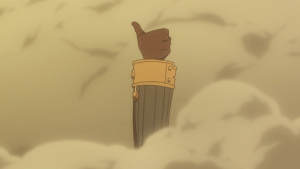 Double Decker! Doug & Kirill #13 – Just at the moment of Cooper’s triumph, he discovers that Kirill, Doug, and Valery are all messing with him. There is no Kirill-derived antidote, there is no special Anthem, it’s all just a trick to get him into a state where he can be depowered and arrested. Clever rules-lawyering temporarily gives Kirill the power to stop some of the more insane aspects of Cooper’s plan, and Zabel conveniently shows up for the killing blow. Yuri is magically alive again, Seven-O continues even without Esperanza because the mayor is taking a tough-on-crime stance, everything is awesome! For now.

The sort of twists and turns needed to achieve this temporary happy ending would cause most shows to be accused of going off the rails, but Double Decker has been very careful to set it all up. We saw the incident with Travis and the spilled coffee. We’ve seen how Doug likes to set up criminals with the opportunity to screw up. We know by now that Travis has a keen sense of when it benefits him to follow the absolute letter of the law and when it doesn’t.

Double Decker has been one hell of a ride, and it isn’t over yet. We’re going to be getting at least 3 more episodes, and even that probably won’t be enough to bridge the gap to its predecessor Tiger & Bunny. I can enthusiastically recommend this, with only one note of caution— once you’ve seen it, it’s going to be a long wait until April when the last of the new episodes comes out. 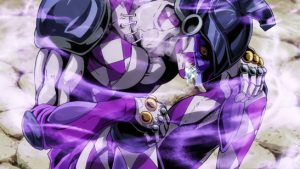 JoJo’s Bizarre Adventure: Golden Wind #12 – Fūgo’s backstory does much to explain what was going on with the math tutoring lesson gone awry back when he and Narancia were first introduced. A background as a brilliant legal prodigy, knocked out of his career track by a #MeToo moment, combined with a violent temper, means that he values learning but isn’t so great at passing it on.

His temper carries over to his Stand, which does area damage in the form of a highly poisonous miasma. Unfortunately, he’s up against an opponent perfectly equipped to defend against it. There’s not much it can do directly if it isn’t allowed into the mirror world. (Though, it seems like it could start dropping rocks on the guy easily enough.)

We’ll have to step away at this point and see how the fight is resolved in the new year, after the winter premieres.

Fossil Cloud From Big Bang Is Found By Astronomers

As far as depicting a world gone completely tits up goes, you’d be hard pressed to top the work of Australians.

An overview of recent and coming events and publications of interest to Spanish speaking science fiction, fantasy and horror fans.