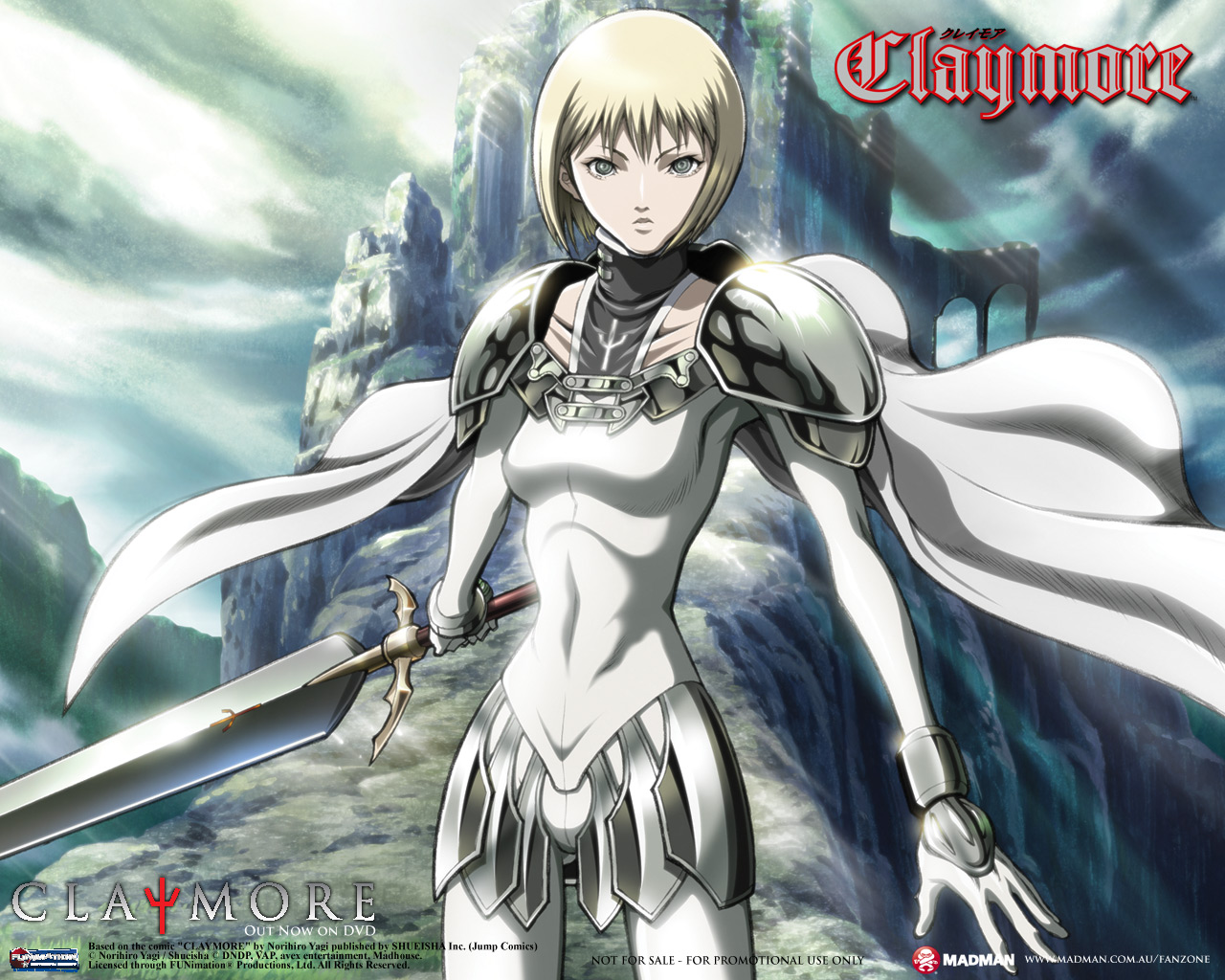 Claymore is one of the more interesting anime I’ve seen in a while. It’s a pretty standard story. Monsters, known as yoma, feed on humans, and the only ones who can defeat them are swords for hire known as Claymores.

All Claymores are women, and they serve an organization known as the Organization. (Very creative.)

These women are able to fight the yoma because they are half yoma themselves. They have the flesh and blood of these monsters implanted within them. Thus, they are stronger, faster, and generally supernatural creatures themselves. By drawing on their yoma energy, they can become even more so.

Unfortunately, if a Claymore draws too much on their yoma energy, they become a yoma themselves. Known as an Awakened Being, these are incredibly powerful yoma. All Claymores, when they are nearing their limit, are executed by the Organization to prevent them from turning.

All Claymores will eventually become the monsters they hunt.

The central character in Claymore is Clare, one of the warriors. Though the anime is full of engaging individuals, Clare is the one we spend the most time with, and the one I’d like to talk about.

While we first meet Clare as an adult, her story begins when she’s a little girl. A yoma killer her entire family, and took Clare as a sort of hostage. The monster beat her, abused her, and possibly fed on her, to the point where she lost her ability to speak.

This ended when another Claymore, Teresa, kills the yoma holding her captive. Clare, mute, clings to Teresa, who claims she had no intention of saving Clare, she only killed the yoma because it’s her job. She rebukes Clare, and goes on her way.

Clare follows. Teresa, who seems to find enjoyment in killing yoma, is actually cold inside. She’s aware of her status as a half-breed monster, realizes she’ll never have a normal life, and her only option is to keep killing the monsters until she awakens and needs to be killed herself. Teresa will never have a normal life, and Clare, having been the victim of the monster’s abuse, won’t either. Clare understands this, and follows Teresa for days.

Teresa, after a small series of adventures, comes to appreciate and eventually love Clare. In this small girl, she finds her own redemption. She’s able to have something similar to a regular life. She has a companion, a sister, a daughter. She dotes on Clare as much as she’s allowed to, though she realizes this isn’t a permanent solution.
Traveling with her will only bring Clare misery in the end, and at every town, she tries to find someone to watch over Clare. Her association with Clare leads Teresa to eventually betray the Organization, and other Claymores are sent to kill her.

During the fight, a Claymore named Priscilla awakens, kills Teresa, and goes off to eat some humans. Clare is left with nothing but Teresa’s severed head.
She takes the head, goes to the Organization, and demands they put Teresa’s flesh and blood inside her, making her a half-half-breed Claymore.

This is your standards helpless girl swears revenge story. A protector, in this case a mother/big sister figure, is murdered by something bad, and the small child is left inexplicably alive. She swears revenge and goes to the people she knows as the lesser of two evils for assistance.

Much of this explains Clare’s demeanor when we meet her at the series’ opening. She’s cold, calculating, and while not ruthless with humans, seemingly indifferent to them.

She hunts Priscilla, is obsessed with Priscilla, cares only about finding Priscilla.

Until she meets Raki. Clare is sent to a small town beset by a yoma. It’s killed several villagers already, including a young boy named Raki’s family. When she arrives, the townspeople react to her with the regular hostility. She’s a half-breed, part monster herself. She’ll eventually become a monster.

Clare kills the yoma, which was posing as Raki’s older brother. Alone, the townsfolk throw Raki out of the village, afraid he may become a yoma himself. He seeks out Clare, and begs to join her. Though she has no real use for him, she agrees.

It reminds her of the only happy time she’s ever had, her time with Teresa. But now, she’s the one doing the protecting, and Raki is her charge. Clare may not be totally aware of it at the time, but she’s walking in her mentor’s exact footsteps.

With Raki, Clare becomes something more. She comes to care for someone other than herself. With every town they come to, Clare seeks someone who will look after Raki, but Raki always protests. He wants to stay with her. He cares about her.

To Raki, Clare is a guardian angel. He feels compelled to repay the debt. More than that, Raki loves her. Not in a boy loves a girl kind of way, but in a son loves a mother, brother loves a sister kind of way. He’s precious to her, and he wants to be with her.

This is complicated by Ophelia. Ophelia is another Claymore, and she’s batshit insane. Yeah, she kills yoma well, but she apparently has no problem killing humans and other Claymores for fun. Clare is assigned to a mission with her, and before they even encounter the yoma, Ophelia cuts Clare’s legs off.

Clare can reattach the legs, but it takes time. Time Ophelia takes to brutalize Raki.

When all is said and done, Clare and Raki escape. Knowing Ophelia will follow them, Clare makes Raki promise to stay alive, and they part ways. She says she’ll find him again, and she means it.

Clare has developed from someone obsessed only with their own negative desires, into someone who genuinely cares for another.

Clare travels around after her separation from Raki, and becomes friends with a Claymore named Jean. Jean had fully awakened, but Clare, having experienced the same thing, managed to get her to revert to her human form. As such, Jean swore her life to Clare, and the two became comrades.

Shortly afterwards, many Claymores were summoned to a northern town to hunt an army of awakened beings that had banded together. Clare, along with other allies she had acquired during her journeys, summarized the mission was orchestrated by the Organization to get rid of problem Claymores, and to give themselves breathing room.
The Organization, at this point, is worth mentioning. They’re pretty darn evil. Sort of. They’re hired to kill yoma, but they make more powerful yoma in return. Yes, Claymores are supposed to kill their comrades when they’re about to awaken, but it doesn’t always happen.

They fight. They fight for like, four episodes, until finally Clare is about to kill Priscilla. Raki arrives in the nick of time and begs Clare not to do it. Raki, you see, has spent some time with Priscilla, who’s crazy, and as he sees her, is a victim. He tells her that everyone has been affected by the yoma problem, and that no one should be fighting. Rather, they should all be glad to be alive.

Clare understands his words, but in her awakened state, can’t stop herself from attacking him. Jean pushes Raki out of the way, and becomes mortally wounded. She tells Clare to revert, like Clare helped Jean to. Clare says, “You don’t understand, if I don’t have revenge, I might as well die.”

Jean tells her there’ll be plenty of time to figure out her reason for living once she’s done, and that  there are people who want to see her alive and have put their faith in her.

Clare reverts, and Jean dies. Friends part, and alliances are formed. Clare resolves to become free of the Organization, and to live a human life with Raki, which was what Teresa wanted for her all along.

All in all, Clare represents a challenge to fate. She’s destined to become a monster, but rather than succumb, she fights it off with the help of her friends and loved ones.
If you get the chance, check Claymore out. It gets a little slow around the 20th episode, but it’s worthwhile.

Steampunk: An Overview of an Up and Coming Genre

For some artists, music spurs their creativity…