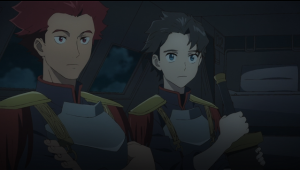 Magatsu Wahrheit premiere – Leocadio has just joined the local security forces. On his first day, what he intends as a good deed backfires in spectacular fashion, as the events he sets in motion ensnare an innocent man and lead to a tragic death. In the background, horrible weapons of war are being unleashed, mutant dinosaurs are attacking, and the nation’s parliament is wresting more and more power away from the monarch (this is portrayed as bad).

At the heart of Magatsu Wahrheit is an intricate, well-built little story of good intentions frustrated by the machinery of an overbearing security state. It has the great misfortune of premiering at the same time as Akudama Drive, which did the exact same thing in its premiere and outclasses this show on every other front.

Magatsu Wahrheit has the generic fantasy approach to setting, although this time it’s a mishmash of the 19th and 20th centuries instead of the usual medieval/Renaissance look. For instance, soldiers dress in fancy decorative armor and carry shortswords; then they get out of Humvee-like vehicles and walk right into machine-gun fire, which somehow manages to wound no one.

Meanwhile the city (or cities, it’s not clear when/where a couple of prologues happen in relation to other things) teems with people but contains a grand total of one Black person, who is a criminal, and two women, one of whom is also a criminal, and the other is set up to potentially be a major antagonist.

This is much, much better than the average video game adaptation, but that is a very low bar. If you want a story of criminals outsmarting authorities who deserve some outsmarting, Akudama Drive gives you a more coherent setting, a more interesting range of people, and, of course, it looks about a million times cooler.

And that concludes the fall premieres! Now for some second looks, and the final decision on what to watch for the rest of the season… 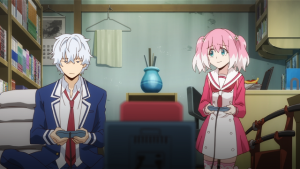 Talentless Nana #2-3 – As everyone starts to realize that Nanao has vanished, Nana finds her next couple victims lining up by being a little too interested in solving the disappearance. First she has to defeat a time traveller, and then she’s up against someone a little too like her, with apparent personality quirks that conveniently explain why he’s latching onto her and demanding to know what she knows about the whole thing.

I’ve begun to think that this story originated partly as a series of intellectual exercises in “How would you defeat such-and-such seemingly invincible power?”. With Nanao, his power was pointless since Nana had nothing to negate. With Shibusawa, the answer is to panic him into not realizing he’s jumping into a deadly situation. Onodera Kyōya’s power of super-healing, though, is a small annoyance compared with the real threat he represents.

So this looks like it may be a story of the gifted detective and his nemesis, except that the nemesis is the protagonist. The detective already suspects her, but he’ll have to be able to prove what Nana did— and that may be what helps spin this out for an entire season.

This is now a clever spin on two genres, mystery and superhero, and that absolutely merits following it to the end. 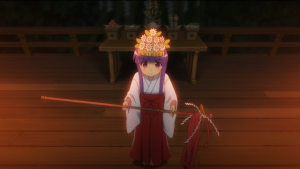 Higurashi: When They Cry – Gou #2-3 – One night Keiichi is hanging out with his friends and enjoying a perfectly normal Shinto festival, and then suddenly it’s all falling apart. Tomitake and a mysterious woman have vanished, the local police chief wants to talk to him, and Rena is unstable, unreliable, and aware that he’s hiding things from her. Worst of all, he might not be the actual protagonist of this story.

The reveal at the beginning of episode 2, that Rika is aware of being trapped in a time loop, is reportedly consistent with the original When They Cry but occurred much later in that version. This has set off a lot of speculation about whether this is really a straight remake, or secretly a sequel, or a complete reimagining. For purposes of this column, it doesn’t matter; I’m coming to this fresh like most of you, so all I can do is rate what we’ve got here in front of us.

And what we have is coming together as a fine horror story. It has handled the slow then sudden descent into paranoia very well so far, and I’m excited to see what else it has in store. 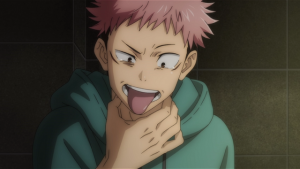 Jujutsu Kaisen #2-3 – Yūji has become a very dangerous person, so he is offered a deal: accept death now, or be spirited away to Magic High School, train with a bunch of loveable weirdos, serve as a convenient disposal unit for all the other fingers of Ryōmen Sukuna, then die. Provided that the other fingers can be found.

So the premise of this story is that a guy needs to find and eat twenty fingers. The best Weekly Shonen Jump manga adaptations have the ability to throw completely absurd stuff like this at you while remaining entirely serious. See also: Yūji having to answer deep questions while being punched by Jake from Adventure Time, and whatever the hell that panda in the opening and closing credits is going to be doing in this story.

And this is one of the best WSJ adaptations ever to show up in anime. The core group of characters are all endearing, the production values are still amazing, and so is the action. 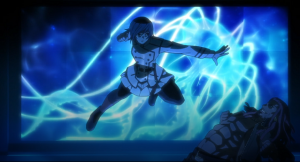 Akudama Drive #2 – Informed that the robot cat has a big job for them, the Akudama hustle off somewhere, flail their way through a simple bus hijacking, crash into the fanciest hotel in town, and then the anti-Akudama squad shows up with lightsabers to take them down. Hopefully the big job isn’t going to require a lot of stealth.

If there is one moment in this episode that really sums up the attitude of the show, it’s where a button for mood lighting has been written into the hotel setting so that someone can accidentally hit it just as the big fight amps up. Hyper-cool violence is what it’s here for.

But, it’s violence with a story to tell as well. Whatever the cat is up to, it involves not just going up against the Kansai authorities but breaking the control that Kanto maintains over the whole of Kansai. The area is so isolated that the only way out is on the shinkansen (bullet train). Presumably there are air and sea defenses to keep people from simply going around the contaminated zone that they have to negotiate. What do the mysterious overlords in Kanto gain from all this? That will be the big question as our criminal heroes work their way up to bigger and bigger offenses. 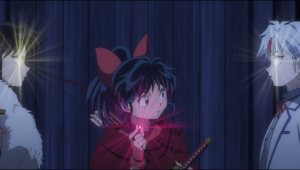 Yashahime: Princess Half-Demon #2-3 – Once upon a time, Tōwa and Setsuna were sisters living in the Sengoku era, until Tōwa fell forward in time. Ten years later by everyone’s subjective timeline, Setsuna and another girl wind up in the modern era along with an attacking demon. After a fight, a challenge, and another fight, everyone decides to go back to Tōwa’s adoptive parents’ place to get some rest and sort things out, except it turns out Setsuna has an unfortunate disadvantage on that point.

For people new to Inuyasha, here’s the full family tree: Tōwa and Setsuna are the daughters of Sesshōmaru, a yōkai, which can variously be translated as “spirit”, “monster”, or, in this case, “demon”. Their mother was human, so they are hanyō, a term specific to this franchise, translated as “half-demon”. Sesshōmaru’s half-demon half-brother is Inuyasha himself, and Moroha is implied to be his daughter by Higurashi Kagome, the priestess who traveled between the modern and ancient world before settling down with him. Higurashi Sōta is Kagome’s younger brother. So Tōwa, after being adopted by Sōta, is now Moroha’s cousin through both sides of the family.

The important part for now is that Tōwa and Setsuna are sisters and Setsuna can’t remember that, due to her memories having been eaten by yet another demon. So back in time the heroines are going to have to go, chasing the dream butterfly, and somehow end up with Tōwa captured as shown at the beginning of episode 1. Also they will probably have to address the matter of the demon taking over the magic tree, that sounds bad.

Yashahime is setting itself up for a long run full of adventures, and why not, since its predecessor ran for 200 episodes. 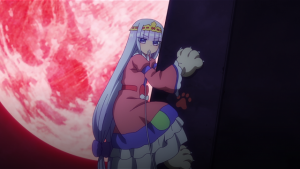 Sleepy Princess in the Demon Castle #2 – Syalis’s first carefully accumulated hoard of supplies is confiscated, but soon she’s right back at it, roaming the castle at will, taking whatever she wants, and generally bullying the inhabitants.

Despite her official status as a prisoner, it’s pretty clear at this point that Syalis is the real mistress of the castle. The head of the Siberian Guards may be able to engineer an occasional setback for her, but she’s going to keep doing whatever she likes until the Demon King gets tired of this and kicks her out. Because heaven knows the hero and his loyal companions aren’t going to be getting there anytime soon.

This episode doesn’t reach the heights of comic ingenuity that the first one did, but it’s still a pleasant, funny diversion. 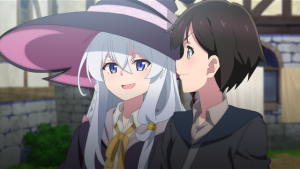 Wandering Witch: The Journey of Elaina #2 – Elaina is now a full and much-travelled witch when she meets Saya, a girl from Basically Japan. Saya is lonely and needy, but rather than say as much, she concocts an elaborate plan to tie Elaina to her by hiding Elaina’s witch credentials, then wheedling her way into a teacher-student relationship and then into bed with Elaina. And, uh, it works?

According to the end of episode 1, Elaina is around 18 now, so this is a story about two people at an age where bad decisions are an unavoidable part of life. But it wants to frame Elaina as a wise woman of the world and endorse what she does, which makes it less excusable.

The focus on the witch qualifying exams also raises disturbing questions about the world Elaina inhabits. What happens to all the boys who are born with magical talent? With the exams designed to allow less than half of applicants to pass, and focused on one very specific sort of magic, does that mean there is a huge population of disenfranchised would-be witches with powerful talents who just don’t happen to be that good at one-on-one combat, and are they organized in some way or just all leading lives full of quiet bitterness?

I have every confidence that Wandering Witch will not be examining these sorts of questions. It’s interested in little adventures and meet-cutes, not in thinking about the unfortunate implications of its worldbuilding. Which is a shame because there are interesting stories lurking in there.

So, the final lineup can only have a maximum of five shows. I think we’ll be going with Talentless Nana for its unique take on superheroes, Higurashi and Yashahime for their new spins on famous franchises, and Akudama Drive and Jujutsu Kaisen for the straight-up wow factor. Sleepy Princess is good enough that in a less amazing season, it would be in. If it sounds like your kind of thing then I still heartily encourage watching it.