It isn’t too difficult to scour the interweb for lists of science fiction movies. I’ve done it. There are lists of the most popular, most successful, most realistic and even most ridiculous. But trying to find a complete list that doesn’t narrow the search by opinion is a bit more difficult. 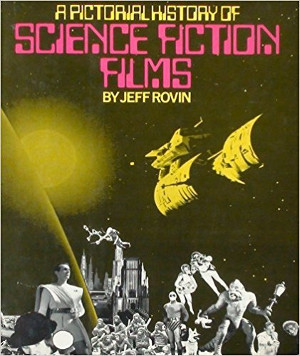 That is, until you open the beautifully compiled book, A Pictorial History of Science Fiction Films by Jeff Rovin. Published in 1975 by Citadel Press (a division of Lyle Stuart, Inc), this is perhaps one of the most complete lists of movies representing our favorite genre.

When one considers the history of a particular subject, it is typically preferred to begin with the earliest recorded moments. You don’t want to just jump in someplace in the middle. So, when the discussion of science fiction movies arises, of course you’re going to begin with the earliest silent films like French director Georges Méliès’ 1902 classic A Trip to the Moon or Fritz Lang’s memorable feature length Metropolis from 1925. But what about Méliès’ lesser known Conquest of the Pole (1912) which was based on Jules Verne’s Voyages Extraordinaires books or the soviet film Aelita (1924) referencing the Queen of Mars? These are the types of films that Rovin helps bring to light for those who might not have found them listed on a random blog.

Along with Rovin’s insightful backstory about many of the films mentioned while breaking them up by chapters based on era, a comprehensive alphabetical list of titles is also provided. Sure, the photos are great, but the overwhelming list is what makes this book so valuable to the dedicated fan.

In case you are wondering (because I know you are), Robot Monster is included!

Okay, this is a pictorial. The included images are as priceless as they are mesmerizing. But it should be noted that this publication is dated as all of the images are in black and white. And the fact that this book was released in 1975, it should be obvious that there are over forty years of films not included.

So, if you’re looking for arguably the most complete list of movies produced between the earliest silent films to the mid-seventies, you can’t go wrong with Jeff Rovin’s A Pictorial History of Science Fiction Films