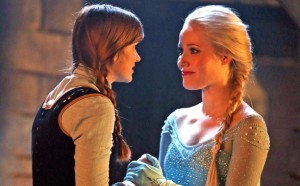 We were treated to a movie-length double episode of Once Upon a Time this week. The episode entitled Smash the Mirror finally saw the Snowqueen truly step up and show her evil, *spoiler alert* along with Mr. Gold being the villain we all know he is. Yep, he isn’t trying to be good for Belle, he just wants more power and he wants nothing, not even the dagger that controls him, to stand in his way.

Emma was getting annoying again though. This time she was thinking about her family rather than herself, but still seemed to go about it in a selfish way. When will she learn her family love her, they are there for her, she has magical powers, she just needs to learn how to control them, she needs to practice and she needs to stop being such a downer and just embrace what she has.

OUAT has really stepped up this season, the last couple haven’t been the best, but this latest season has really had me on the edge of my seat. My only moan would be that the show seems to be focusing too much on the popularity of Frozen and seems to have dropped a lot of the regular characters. When did we last see Granny in her diner or Red Riding Hood? Cinderella popped up last week, for a mummy and baby meeting. Even Belle didn’t make an appearance in the double episode and Henry and his breaking voice is getting less screen time. I guess focusing on the new characters is what is keeping the show fresh, but a little nod to the characters we fell in love with wouldn’t go a miss.