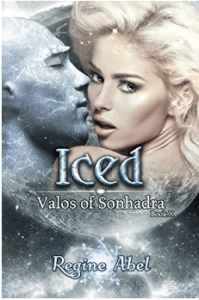 Science fiction reading recommendations for the middle of the hot summer!

Regine Abel brings us Iced (Valos of Sonhadra Book 10) and here’s the blurb: The fate of his people rests in her hands.

When the penitentiary ship she’s incarcerated in gets sucked into an anomaly, Kira barely survives the crash onto an alien planet. Along with a handful of survivors, she finds refuge in The City in the Caldera alongside its Fire Valos inhabitants. But the sadistic experiments performed on her by the prison’s scientist make the heat intolerable for her. When the opportunity to go to the frozen city of E’Lek presents itself, Kira believes she’ll finally be at peace.

Duke is confused by the strange human female. Like him, she’s cold, made for the icy lands of the Northern Valos. Her resemblance with the Creators and questionable friendship with a human hated by his people raises their collective suspicions. Yet, only she could save their lost tribes condemned to an eternal slumber. As his heartstone warms for her, Duke is determined to prove to the rest of the tribe that beneath her frozen exterior hides a compassionate female. His female. 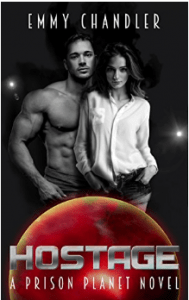 A second series involving prison comes from Emmy Chandler and these books are auto-buy for me. Hostage (Prison Planet Book 5) was no exception and takes off from the action in Champion, but is nicely standalone. I enjoyed the reality show aspects in Champion and some of that theme continues in this next installment of adventure on the terrifying planet. Here’s the plot: Sebastian Wolfe got himself sentenced to death by combat on the prison planet Rhodon in order to protect his sister, Sylvie. As last season’s champion, she was released into the open population, and if he prevails this season, he’ll be allowed to join her. And at first, that was the plan.

Then, at an airborne afterparty following the first fight of the season, Sebastian seizes a chance to crash the ship into zone three, planning to escape the wreckage and join his sister early—until fate throws Kaya Johnston into his path.

Kaya would have died upon impact if Sebastian hadn’t bailed from the doomed yacht with her in his arms, but that’s no reason to go all weak in the knees. He’s the one who crashed the ship in the first place! Now she’s stranded on a prison planet, barefoot and ill-equipped, with only a gorgeous, protective death row inmate who’s declared her his hostage—yet seems to think of her as much more.

Sebastian drags her deep into zone three in search of Sylvie, so he can demand an escape vehicle in exchange for his captive. But after a few days alone with Kaya, he might be unwilling to ever give his beautiful, compassionate hostage up… 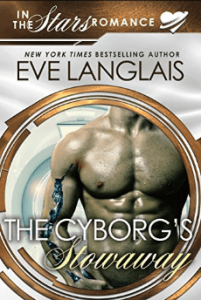 On the theory that there are never enough cyborgs in science fiction romance, here’s the latest from Eve Langlais – The Cyborg’s Stowaway: In the Stars Romance (Gypsy Moth Book 2). The blurb: Can a cyborg let go of the wife he lost and make a stowaway his bride?

There’s a problem on the Gypsy Moth. Craig ‘Crank’ Abrams has found a stowaway. A tiny one that tucks easily under his chin with the biggest damned eyes he’s ever seen—and a way of tugging at a mechanical heart he thought broken.

Ghwenn has secrets, which is why she’s on the run and hiding. When her enemies catch up to her, she finds an unlikely hero in the cyborg that refuses to hand her over. 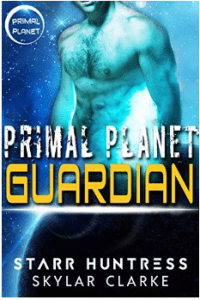 If you’ve wanted to sample an SFR novel with some form of dragons, because they come in all forms in the genre currently and are very ‘hot’ reads, here is Primal Planet Guardian by Starr Huntress and Skylar Clarke. The description: Vohx is a dragon warrior from the savagely dangerous planet of fire and ice, Veloria. When you live by a code of honor, virtue, and justice and someone saves your life—whether by accident or not—you are honorbound to return the favor.

So, when Stacy, delighted to be picked as the medic/token female on a mission to save Earth from a deadly disease, shoots an attacking enemy alien with her blaster … she unwittingly gains a new companion who won’t leave her side.

He’s seven feet tall with the body of a marble statue … stoic and protective and sexy as hell. It doesn’t take Stacy long to decide she could get very used to having him around… 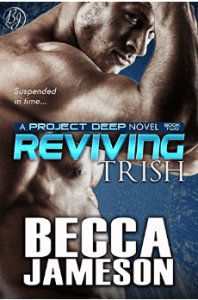 For a change of pace, there’s the Deep series by Becca Jameson, involving a group of researchers who were infected by a virus ten years ago, cryogenically frozen and now being thawed since a cure has been found.  Naturally not everyone in the world thinks this is a good or safe idea. Reviving Trish is book two in the well-received series and here’s the blurb: After ten years, life is giving them a second chance…Tushar will do anything to rekindle his marriage. Keeping his wife safe is his number one priority. Hiding in the Mountains of Montana is their best chance at survival. Trish isn’t on the same page. She wants more time with the son she hasn’t seen for ten years. She wants her life back. What if it turns out no place is safe? The sparks that brought them together two decades ago are still burning. Neither is willing to take the risk. But second chances should never be squandered. 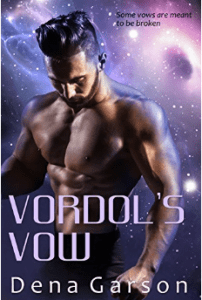 A re-release of a story I loved when it first appeared in the Cosmic Cabaret collection is Vordol’s Vow (Rising Sons Book 2) by Dena Garson, now released on its own. There’s that fun reality show element I seem to go for every time, and characters I wanted to spend more time with. The plot: A long time ago Vordol Silveira learned that if he wanted to become the best bodyguard in the galaxy he needed to keep everyone except his brothers at arm’s length. That vow served him well until he runs into the now grown-up daughter of his former mentor while working a security job aboard the LS Quantum.

Pitannah Lorento is a Quantum waitress who dreams of winning this year’s intergalactic burlesque competition in order to pay for her mother’s expensive medical treatment. Seeing Vordol again brings back years of unfulfilled desires – a distraction she doesn’t need. Yet, she’s no longer an awkward teenager and he is sexier than ever.

Vordol’s client’s safety has always come first but when Pitannah is threatened, his heart demands he make her priority. If he somehow manages to keep them both safe through the competition, his vow may become obsolete. 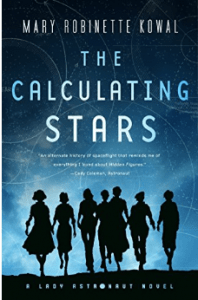 I’ll finish with a novel that’s science fiction with perhaps mild romantic elements: The Calculating Stars: A Lady Astronaut Novel by Mary Robinette Kowal. In 2008 she won the Campbell Award for Best New Writer, and in 2011, her short story “For Want of a Nail” won the Hugo Award for Short Story. Her work has been a finalist for the Hugo, Nebula, and Locus awards. She has written SFR, with her Glamourist Histories but is now moving even more into science fiction. The story: On a cold spring night in 1952, a huge meteorite fell to earth and obliterated much of the east coast of the United States, including Washington D.C. The ensuing climate cataclysm will soon render the earth inhospitable for humanity, as the last such meteorite did for the dinosaurs. This looming threat calls for a radically accelerated effort to colonize space, and requires a much larger share of humanity to take part in the process.

Elma York’s experience as a WASP pilot and mathematician earns her a place in the International Aerospace Coalition’s attempts to put man on the moon, as a calculator. But with so many skilled and experienced women pilots and scientists involved with the program, it doesn’t take long before Elma begins to wonder why they can’t go into space, too.

Elma’s drive to become the first Lady Astronaut is so strong that even the most dearly held conventions of society may not stand a chance against her.

More recommendations to come next time!