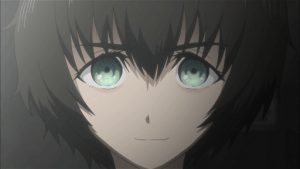 Steins;Gate 0 #17 – The flow of time in Steins;Gate works much the way it does in Connie Willis novels when the changes are small. Minor perturbations don’t affect overall events much; time will find a slightly different way for things to happen and preserve the larger picture. The alpha timeline (where Kurisu dies) and the beta one (where Mayuri dies) were two such self-preserving states, and it was only with a bunch of accumulated changes that Okabe’s crew were able to switch between one and the other.

Or, I should perhaps say, Kyōma Hōōin’s crew. Hōōin was Okabe’s mad scientist persona. It was in that mode that he made Mayuri his “hostage” when they were much younger, and Mayuri’s grandmother died, and she wanted to join her in Heaven. Mayuri is shocked by Okabe’s lack of reaction when his lab coat is appropriated because that means that he’s discarded the person he was when he saved her life.

So Mayuri gets one glorious moment when she is done being the wallflower, the hostage, the quiet sufferer of unrequited love, and decides she’s going to fight to save Okabe and Hōōin. And then all hell breaks loose and suddenly we’re in a brand-new timeline where both she and Kurisu are dead. 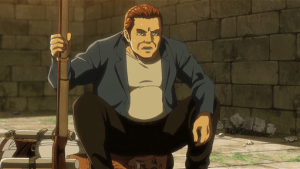 Attack on Titan #41 – Safely into the woods, Levi’s squad sets about the important business of finding new key figures to beat up for information. However, who should they wind up capturing on patrol but the old roommate of Annie Leonhart, the first person to be revealed as a Titan infiltrator. A lot of shouting and one awkward test of loyalty later (I’m still not sure if that was the real plan, or if that was just a face-saving explanation Marlo came up with on the spur of the moment), they have two new allies in the military police who now know the real story.

The truth is getting out in Trost, too. Once Flegel Reeves has allies and time to catch his breath, he’s ready to fight back and rally the citizenry the way his father once did. Now the local journalists feel free to spread the word.

Not that it will necessarily spread far. The military police just have to remember that Trost is closely encircled by very high walls, and closing the gates for a while might make people reconsider whether living under a paranoid absolute monarchy is that bad after all. 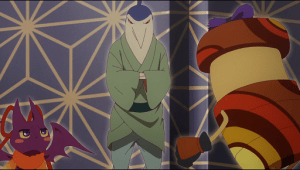 We Rent Tsukumogami #4 – O-Kō and Seiji’s latest acquaintance is a shady character from Ryogoku (another district of the city, known best today as the home of sumo wrestling). But, thanks to a lost seal case and the gossiping tsukumogami, it is revealed that the playboy is really just a timid guy who can’t say no to a social obligation.

Seiji is very protective of his big sister (indeed, possibly to the extent of jealously, since the fact that they aren’t related by blood has been prominently mentioned twice now). Just as he was concerned about the new guy hanging around, he didn’t seem to approve of Suō’s owner bringing her presents. Neither did the suitor’s mother, and it’s possible his “disappearance” was simply the result of his mother arranging to have him sent away. Either that or Seiji threatening him.

But that doesn’t explain why Suō has apparently been separated from his previous owner. Hopefully now that he’s been found, he’ll be able to tell the story himself. 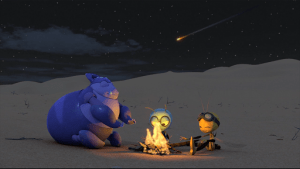 The robot has a Qwerty Corporation logo on it, so humans have been here too and the newest insect character may be another escapee from scientific experiments. Why they have robots patrolling to wipe out insects is probably a useless question to ask, alongside why they couldn’t build robots that can stand up to bees with tiny compound bows. The point is, humans are here and humans make everything bad.

I’m expecting to hear next that humans had something to do with the buried forest. Seems like this planet, or at least this part of it, wasn’t a desert until relatively recently. 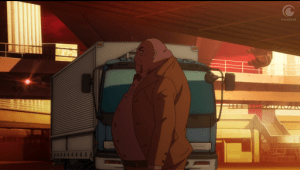 Persona5 the Animation #19 – It’s time for a class trip to Hawaii for no apparent reason, so Ren, Ryūji, Ann, and Makoto get to have a real tourist experience: staying connected with the news at home thanks to smartphones, eating at a familiar chain restaurant, and not needing to speak a foreign language at all. Oh well, the locals are just a bunch of lowlifes anyway.

Meanwhile, someone has targeted the principal of their school for a mental breakdown. And it’s made to appear that that someone is or is in contact with Makoto’s sister’s superior. The principal has stopped being useful to them— what was his use in the first place? Has the shadowy enemy with the black mask known that Ren had a link to the metaverse even before he was sent to his new school?

The Phantoms’ next target, however, is unconnected to all of this (so far). But he is connected to the burger chain that keeps popping up. If that’s getting a closer look, I’m hoping for a clear sign as to whether or not it’s a Hitchhiker’s Guide to the Galaxy reference, because wondering has been driving me nuts.