In this week’s viewing: Hakumei and Mikochi and Kokkoku stop to change clothes, also some dramatic stuff happens, and more! 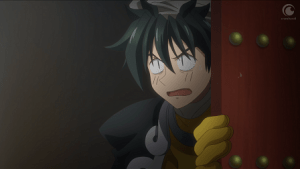 Hakyu Hoshin Engi #6 – One thing you almost never see in anime is the idea of multiple major ethnic groups within a country. The Japanese government prefers to present Japan as a homogeneous nation, even though it has native minority groups, and on the extremely rare occasions when anime does notice them, they are more alluded to than spoken about directly. This pattern carries over to anime fantasy worlds which tend to be single-ethnicity kingdoms.

But if your secondary world is ancient China, you kind of have to notice ethnic tensions. As Seiki gears up for war, its dominant group, the Shū, are all excited about being in charge and planning to name their new empire after themselves. (Implying that Yin is also the name of the people dominating the current empire.) Taikōbō’s people, the Kyō, are perpetual underdogs, fleeing the capital region for Seiki due to persecution. There they were welcomed in by Ki Shō, demonstrating what a great and generous man he is.

Unfortunately, he’s now let the plan for the revolution down a bit by dying. It turns out he went off of food almost completely after the meatloaf incident. So the task falls to his eldest remaining son, Hatsu. Hatsu is not a great orator or a very studious man, but the people are behind him and Taikōbō seems to think that there’s some decent raw material there.

This may all be moot, however, as Dakki is now trying to provoke open war between the two major orders of hyper-powerful martial artists. At this rate it’s worth asking whether there’s going to even be an empire left to conquer when the dust settles. 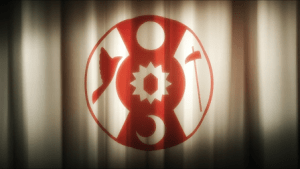 Kokkoku #7 – It’s time for Sagawa to lay his cards on the table, and he does not disappoint. The founder of the Genuine Love Society kept journals about Stasis that stretch from the 1300s all the way to the late 1800s. (Nitpick: all the radiocarbon dating proves is that the paper in the journals was produced over a span of several centuries.) It’s interesting that the scriptures also talk about Stasis as a tool for guiding society, because you know what else was last heard from in the late 1800s? Japan’s attempts to keep the rest of the world out and stay in the Middle Ages forever.

Sagawa’s plan is to deliberately relinquish control to his Specter after making sure that no one else can follow him into Stasis. Without the distraction of attempted murder, he can theoretically metamorphose into something beyond a Herald. So that’s what he meant by the deeper parts of Stasis.

He still has a long list of people to get out of his way, with his followers in Stasis now adding themselves to the list. Meanwhile, Juri is fashionably reclothed and ready for some Specter-exorcising action. (I’m sorry to see what was probably a nod to H. G. Wells go, but glad she isn’t forced to stay in the Ripped T-Shirt of Fanservice for what would probably be another 5-6 episodes.)

Then again, maybe the bigger problem for everyone will be Takafumi. There’s no quick easy way to expel the acquisitive and murderous thoughts he’s been having lately. 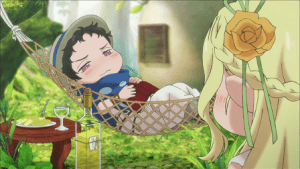 Hakumei and Mikochi #6 – A very low-stakes episode this time. Hakumei finds a mysterious egg in the forest, inhabited by an eccentric stylist and amateur cook. Jada takes an immediate liking to Hakumei, and later to Mikochi for teaching her how to get her limoncello right, but not so much Konju and her pushiness. But it turns out all right, as it usually does on this show.

Iwashidani is such a homebody that he doesn’t even engage in the time-honored Japanese custom of going drinking with one’s co-workers after work, so Hakumei and Mikochi decide to force him to have a nice day around town, with lots of food and a stop to get some less primitive clothes. As seems to happen to everyone with prolonged exposure to the two women, he eventually lightens up.

Not anything really deep happening this week, except maybe for Hakumei presenting as less and less feminine by the minute. I’m not sure if this, along with Mikochi being treated more or less as Hakumei’s wife last week, are part of the author attempting to make a statement, or just fitting Hakumei more into the tomboy archetype. 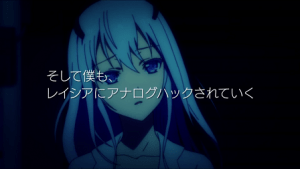 Beatless #6 (?) – This mid-season clip show is ostensibly brought to us by the Olympics, but the usual cause of an episode like this is production delays. It’s also possible that with the series planning to run for six months, there wasn’t quite enough material in one novel to stretch that far. We are also promised a more traditional end-of-season recap.