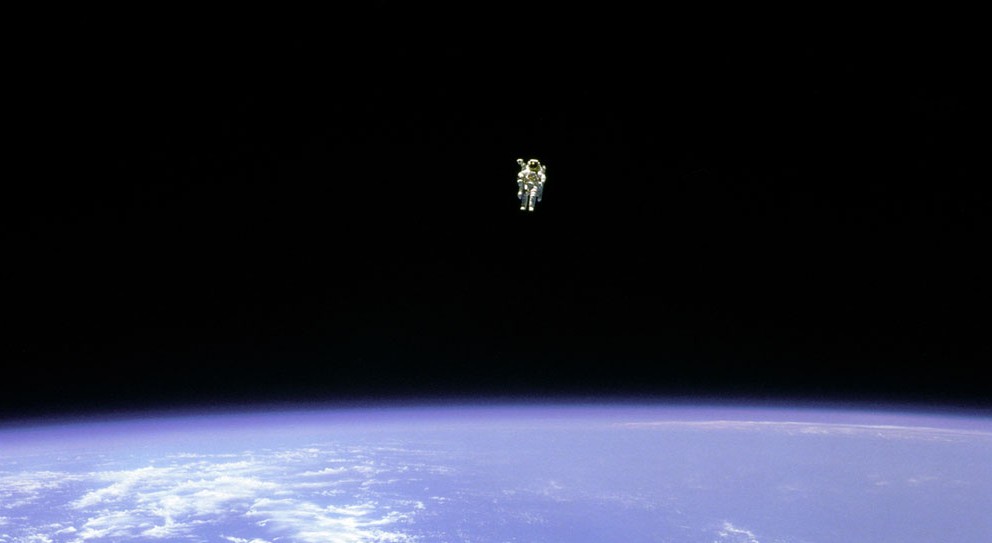 2017 has been another sad year for space travelers. Between January and November, we lost three more Apollo astronauts. There are some stories about each that you may not have heard. 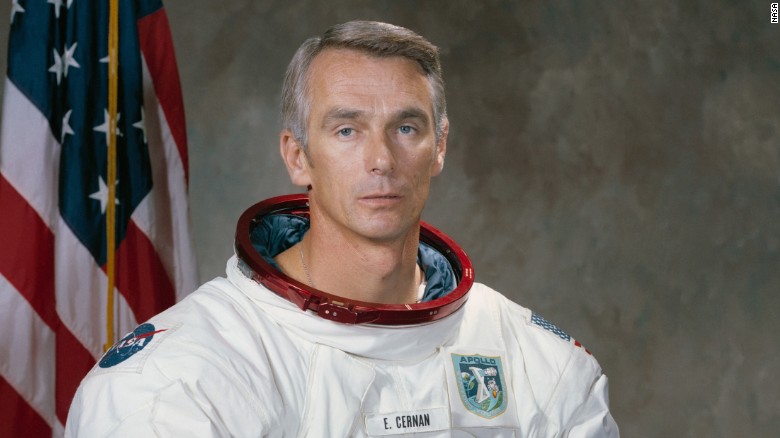 On January 16th Gene Cernan, the last man on the Moon, died.

Cernan was selected for the Apollo Program as part of Astronaut Group 3 in 1963, and he went on to make three spaceflights. He was Pilot of Gemini 9A in June 1966, Lunar Module Pilot of Apollo 10 in May 1969, and Commander of Apollo 17 in December 1972, the last time humans walked on the Moon.

Although Apollo 17 was a resounding success, if sadly humanity’s final trip to the Moon, I think Captain Cernan would count his flight on Apollo 10 as the more exciting one (not in a good way). That flight was the final full dress rehearsal, short of actually touching down on the lunar surface, for the first Moon landing of the next mission, Apollo 11.

After they descended to within 10 miles above the lunar surface, the Apollo 10 Lunar Module crew of Pilot Gene Cernan and Commander Tom Stafford prepared to separate from the descent stage and fire the ascent engine. But the Lunar Module started to roll wildly out of control, and continued to do so for almost 15 seconds, before Stafford took over manual control and stabilized the spacecraft. Then he and Cernan were able to lift away from the Moon and rejoin John Young in the Command and Service Module orbiting overhead. In his biography Last Man on the Moon, Gene Cernan wrote, “…had we continued spinning for only two more seconds, Tom and I would have crashed” onto the Moon. 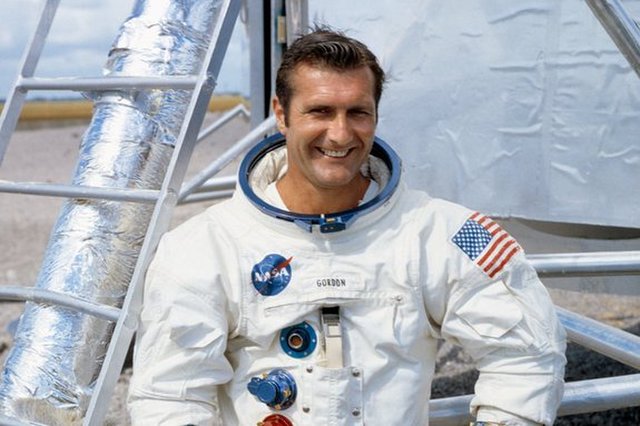 On November 6th Richard Gordon, one of only 24 human beings who have travelled to the Moon, died.

Gordon was another member of that 1963 Astronaut Group 3. He later made two spaceflights, one in 1966 as Pilot of Gemini 11, and again in November 1969 as Command Module Pilot for Apollo 12, the second Moon Landing mission.

For Apollo 12, Gordon trained extensively to learn the workings of the Command Module and the function of every switch, display and control. During the lunar landing segment of that mission, he, like Mike Collins before him, spent time alone in the Command and Service Module, orbiting the Moon and taking photographs. Gordon’s solitary time was 38 hours, 15 of those beyond contact with Earth or his fellow space travelers.

On the trip back to Earth, Gordon used his deep understanding of the onboard systems to make a bulls-eye landing at splashdown. With the successful flight of Apollo 12 in November of 1969 – six years after President John F. Kennedy challenged the nation put a man on the Moon by the end of the decade – the United States had sent twelve men to the Moon, and put not one, but four pairs of human footprints on its surface. 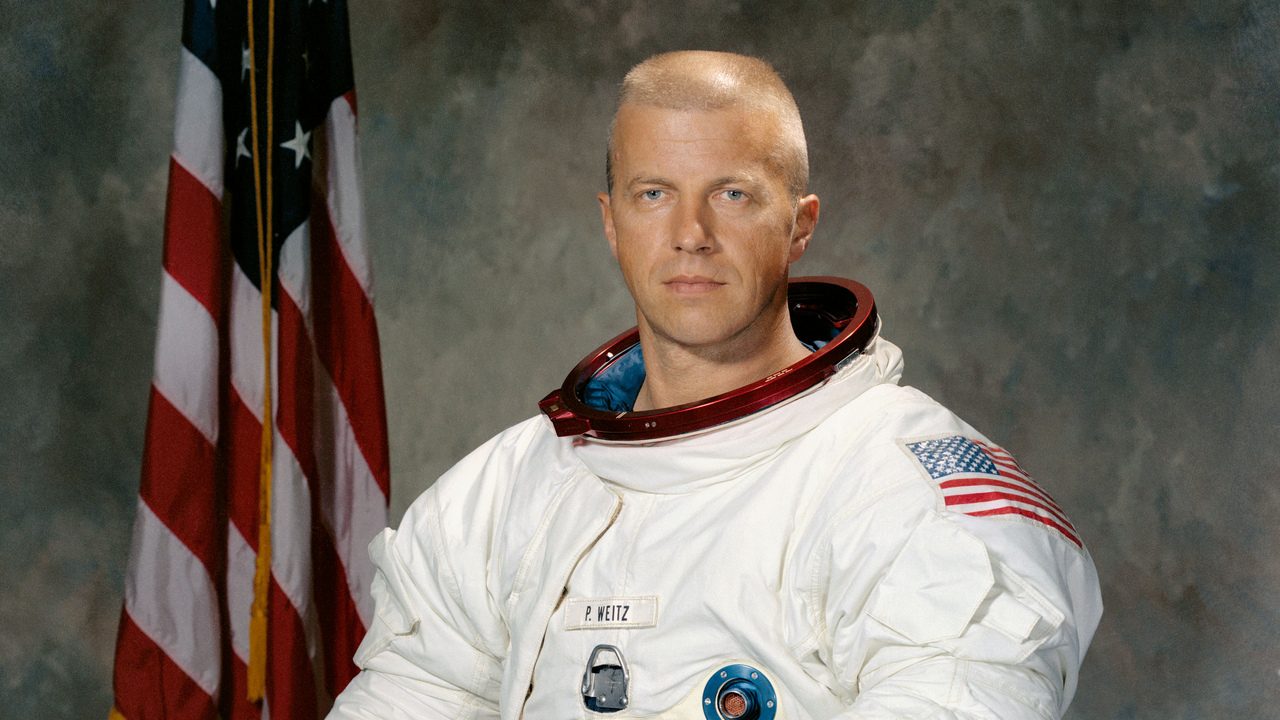 Weitz was a member of Astronaut Group 5, selected by NASA in 1966. That group of Apollo astronauts had nineteen members, nine of whom, including Fred Haise (Apollo 13) and Edgar Mitchell (Apollo 14), later went to the Moon. Paul Weitz travelled into space on two different spacecraft. In May of 1973 he was Pilot on the first crew to the Skylab space station, and ten years later, in April 1983, he was Commander of the first flight of the Space Shuttle Challenger.

On May 14, 1973, a Saturn V rocket with the unmanned Skylab workshop – our nation’s first space station – mounted on top, lifted off from the Kennedy Space Center. The flight immediately went wrong. Several major components of the spacecraft were severely damaged during launch, making it impossible for human crew members to board. Unless someone figured out what to do, no one would be able to work inside Skylab. The first launch of astronaut visitors to the laboratory was delayed while NASA worked on what to do next.

Engineers and astronauts on the ground spent the next ten days developing and testing procedures and tools that the first crew might employ to repair or replace damaged parts on the orbiting workshop. After they worked out a number of options, NASA made the decision to launch.

On May 25,1973, Skylab 1 – the first manned mission to Skylab – lifted off with Joe Kerwin, Paul Weitz, and Apollo 12 veteran Pete Conrad on board a repurposed Apollo Command and Service Module. When the crew arrived at the space station, Conrad maneuvered the CSM around the Skylab workshop to view the damage, and reported that it was extensive indeed. One of the two large “wings” of solar panels was missing altogether and the other was jammed and couldn’t open, so most of Skylab’s electrical power was gone. And an external heat “shade” intended to protect the crew from the intense heat of the Sun was also missing.

Over the next two weeks Conrad, Kerwin and Weitz ventured inside the dangerously overheated spacecraft to inspect the damage, performed several harrowing and physically exhausting spacewalks on the outside, used a number of makeshift but effective tools to repair and replace missing components, did some clever workarounds, and applied a lot old fashioned hard labor in the vacuum of space. And they saved the Skylab workshop.

Following the restoration, between May of 1973 and February of 1974, three expeditions of three-man crews visited Skylab for periods of 30 to 90 days each. They performed a wide range of scientific experiments, including space and solar studies, and did research into the effects of long-term exposure of humans to spaceflight.

The incredible, and incredibly true, spacecraft repair done by astronauts Pete Conrad, Joe Kerwin and Paul Weitz rivals anything portrayed in the movie The Martian.

The three remarkable men we lost this year, like the Apollo era astronauts who died before them, are rare human treasures who cannot be replaced. And they shouldn’t be forgotten.