Dunkirk is a movie about real life heroes that everybody should see.

Engaging. Uniquely done. Artistically filmed. Some parts were a little redundant and could draw criticism. A little more information about the situation would have helped. I suggest if you haven’t seen it yet to read up on the history first because you won’t get much of an explanation from the movie.

Based on history which you can find details about on the Internet as well as in books, Dunkirk, tells the story of The Battle of Dunkirk in the Second World War between the Allies and Germany. As part of the Battle of France on the Western Front, the Battle of Dunkirk involved the defense and evacuation of British and allied forces surrounded by Germans in Europe from 26 May to 4 June 1940. You can read about the evacuation in many articles and history books. Rather than give the viewer a sound understanding of what is taking place, the filmmakers assume we already know something about the event; instead, the movie drives home the emotional and mental suffering the soldiers went through during these traumatic three days.

The real impact didn’t take hold of me until the movie was over and I waited for my husband as he used the restroom. I stood on the plush red carpets, ambient lights glittering around me. The tantalizing smell of popcorn. Folks dressed for a day out on the town. I waited next to brilliantly lit posters which heralded upcoming movies. Bright colors back-lit with handsome actors and magic wielding gestures. Star Wars, Thor: Ragnarok, The Justice League. Movies about good versus evil. Movies warning of impending doom that mankind faces from some unknown evil force. Monsters, aliens, foreign space ships, demi-gods.  Movies that boast of supernatural beings with supernatural powers fighting to save us mortals.

And then there was Dunkirk. 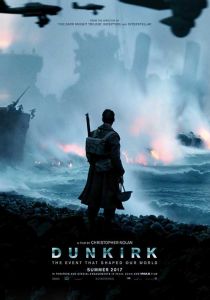 I love a science fiction story, and even more a fantasy story. Imagination is a wonderful thing. Good heavens, I do plenty of day dreaming and writing fantasy novels. But I don’t have to look to my imagination to find heroes. They don’t need supernatural powers (though an awesome British Spitfire helps). They don’t need bright neon lights to flash out their names, because a hero doesn’t boast. There’s no pomp and circumstance in doing the right thing. There’s no red carpet but only the stain of blood seeping through the flesh of the man whose hands the hero pulls out of the water. There’s no grand finale when he lands on the beach because there’s no knowing if the beach will be blown to smithereens two seconds later. Four hundred thousand men. Four hundred thousand heroes fighting to save a continent, a nation, a squadron, an individual, your son or brother or sister.

These are the heroes and Dunkirk, the movie paid a righteous tribute to them, as well as to the men and women who are still enduring the hardship of sleepless nights, fighting fear not knowing if they will live to see tomorrow, braving the sight of their friends, their partners, their commanders die in their arms. The heroes we forget about in our cushioned chairs, our air-conditioners or heated homes in the winter, our cars, our luxuries, our full refrigerators, our video games, our movies.

If for no other reason taking a moment to pay tribute to heroes who are real is no waste of time.

A movie everyone should see. You, your spouse, your brothers and sisters, your children.

How one woman was both disappointed and inspired by science fiction.