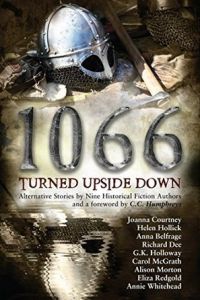 One of the things I love about alternate history is how often I get the chance to learn about periods of history I know little or nothing about. For example, I knew about William the Conqueror and his victory at the Battle of Hastings, but only in the broad strokes of history. I had no idea about the drama and politics that happened before or after. Thankfully the anthology 1066 Turned Upside Down came my way and since there were two stories listed there that got nominated for the short form Sidewise Award, I figured I should take the time now to review them and a few other stories that caught my interest.

The first nominee is Anna Belfrage’s “The Danish Crutch”. In this story the Danish king is worried that the coming Norman invasion is growing to screw with his country’s economic ties with England, so he is sending a girl and a crippled boy to Normandy to potentially put a stop to it. While the plan may sound a tad far-fetched, I still found the story an interesting read and I liked how it made someone with a disability the character that drove the plot. While the romantic aspects were not for me, its solution to stopping William’s ambitions once and for all makes the most logical sense to me (i.e. lets just kill the bastard!). That said I have to say I like the other nominee better, which brings us to…

G.K. Holloway’s “The Battle of London Bridge”! Here we find Edgar Ætheling, the teenager who in our history was passed over as King of England for Harold Godwinson despite his stronger claim, suddenly finds himself king after Harold fell at Hastings. Unlike our timeline’s Edgar, he manages to organize a stiffer resistance to William when he comes to cross the Thames to take London. Edgar and his supporters know that William is the key to all of this and if they can take him out, then there is still a chance to save England from the Normans.

This was a fun story to read since it introduced me to an obscure figure of history who, if things had gone differently, may have actually made a name for himself. And isn’t that was alternate history is all about? Unfortunately like “The Danish Crutch”, it is more of an “origin” story that focuses on the exact point of divergence without detailing what may have happened afterwards. This isn’t exactly a bad thing, but there are way too many stories like this in 1066 Turned Upside Down. It would have been nice to see a few more tales set 10, 50, 100 years or more in the future just to get a better sense of how much the world changed.

Before I end this review there a couple of other stories in 1066 Turned Upside Down that I wanted to give a shout out to. First there is “Emperor for the North” by Joanna Courtney which features Harald Hardrada of Norway getting better advice which allows him to defeat both Harold Godwinson and William of Normandy. This story was worth a read because it gave me that post-divergence world-building that I was looking for.

Then there is “A Roman Intervenes” by Alison Morton. It’s sets in her Roma Nova timeline where a pagan Western Roman state survives in roughly our timeline’s Slovenia. There an agent of Roma Nova is set to perhaps convince William not to invade England and, if they can’t do that, take away his ability to invade in the first place. I liked this story as well, even if you you do have to step on a lot of butterflies to have a Western Roman successor state exist without cancelling out everything that led to William’s invasion of England in the first place.

Otherwise, 1066 Turned Upside Down was a perfectly fine alternate history collection. Even if you don’t know much about the Norman invasion of England, don’t worry, the editors take care of that for you by including snippets from our actual history between the stories. So you can get some quality entertainment from this book and learn something new at the same time. That said, there were a lot of origin stories in this collection and even a few secret histories (i.e. a revisionist interpretation of recorded history), but not enough to take away my enjoyment. 1066 Turned Upside Down definitely earns a recommendation from me.

So with that, I succeeded in reviewing all of the Sidewise nominees before the winners were announced. Yay, me! I look forward to seeing the winners announced on 8/20 and I hope you are too.

4 years of pictures of an exploding star condensed into 15s