In case you haven’t heard, I’m going to be leaving Amazing Stories soon. However, before I go, I’ve got to put my ship in order. I plan to publish one last book review and one last edition of The Audio File. That brings me to the topic of this, my final comic book review here on Amazing Stories. I thought long and hard about what I would be reviewing. After considering the options it occurred to me that I haven’t reviewed anything alternate history related over here. To rectify this oversight, today I will be reviewing the comic book Arrowsmith by Kurt Busiek and Carlos Pacheco. 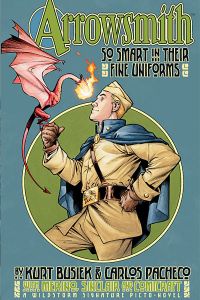 Arrowsmith takes place in a world where magic and mythical creatures are real. They decided to reveal themselves to humanity during the Middle Ages and have lived in relative harmony since the Peace of Charlemagne in the year 803. By the year 1915 the nations of Europe are engaged in a great war with world-spanning consequences.

Fletcher Arrowsmith, a farm boy from the United States of Columbia, longs to get out and see the world. When the chance comes to join a volunteer regiment to fight for the Ententes, he leaps at the opportunity. He’s sure that it will be the adventure of a lifetime. However, Fletcher soon comes to find that war isn’t all fun and games.

Right off the bat I knew I was in for a good time with this story. An alternate history comic with magic, dragons and World War I? It had me at hello. Now, if you’re the kind of person who reads alternate histories for plausibility, you might have some issues with Arrowsmith. Ignoring the inherent implausibly of magic and mythical creatures, there’s the fact that the borders of North America and Europe are awfully concurrent despite the presumably massive changes to history.

Actually, why don’t I show you what North America and Europe look like in this world. I apologize in advance for the crappy quality of these images, but they were the best I could find. 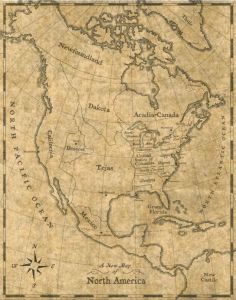 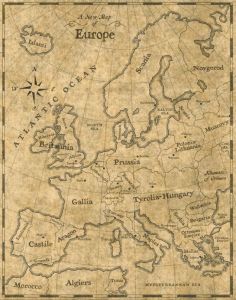 There’s a lot of archaic names, a bit more Balkanization, but they’re not too terribly different from Europe in our world’s 1915. The map of North America is just begging for elaboration. This tends to happen in a lot of alternate history works. The writers focus on the areas related to the story, and leave everything else as an afterthought. Mind you, this isn’t a criticism. I’ve done it enough in my own works, and there’s only so much you can fit into a given story. Plus, there are hints that there were plans for elaborations in future volumes. Hold that thought, we’ll get back to it in just a minute.

For now, let’s go back to plausibility. Okay, Arrowsmith isn’t the most plausible alternate history, but that was never the point. The idea of Arrowsmith was to tell a World War I story with magic and dragons added on top. In this regard, it more than succeeds. Beneath the magic and dragons, Arrowsmith is very much a typical World War I tale. We see Fletcher go from a wide-eyed idealist to a mature young man as he witnesses the horrors of war. Some of the most memorable, and touching, scenes are when Fletcher loses friends in combat. There’s also a scene that really reminded me of Kurt Vonnegut’s description of the bombings of Dresden and Munich during World War II. I’d tell you more, but I wouldn’t want to spoil such a great scene.

If there is a weakness to this comic its with how it handles its message. There does appear to be a bit of an anti-war theme, as per most works centered around World War I. However, it is a bit undercut by how cool all the battle scenes look. To be fair, it’s a problem that tends to be common among media with an anti-war message. Plus, I get the feeling that, as fun as the battles might be to watch, they’d be a lot less fun to participate in.

I would have also liked to see the non-human characters given a bit more focus. We only really have one, a golem named Rocky, who gets truly fleshed out. One thing I found interesting about him was that he worships the Norse gods. It would have been nice to see a little more about the religious beliefs of the magical creatures. Adding to that, there’s a scene where Fletcher has a vision of the Norse gods; it is ambiguous as to whether or not it was a hallucination induced by the stress of battle. Admittedly, overall these are relatively minor points. Instead, let’s talk more about the things I loved.

I like spotting all of the subtle differences from the 1915 of our world. For example, Uncle Sam still wants you, but he wears a stars and stripes wizard hat and robe. In fact, a lot of the propaganda posters in the background are based on those from our world’s World War I. I thought that the magic used by the Air Forces was responsibly well done. The pilots use special talismans to channel the energies of dragon hatchlings that sit on their shoulders. Also, on that note, I thought that the dragon hatchlings were absolutely adorable. I saw them and I thought “Aw, I want one!” The artwork is really well done. The landscapes and backgrounds are great, and the characters are well drawn

I also found it interesting that there’s still plenty of technology along with all the magic. We see magic powered ships, but certain scenes show that steam powered ships are still in use. There are also hints that there’s a bit of a rivalry between magic users and technology advocates. That is, if comments made by Fletcher’s blacksmith father are anything to go by.

Arrowsmith tells a complete story, but it was intended to be part of a bigger series. For whatever reason, the sequels never materialized. Kurt Busiek hinted, back in 2011, that there might be hope yet. At this point, however, I think it’s safe to say these sequels probably aren’t going to see the light of day. It’s a damn shame, there’s so much potential for sequels. The world could have really gotten fleshed out, and not just with the continuing adventures of Fletcher and company. There could have been prequels set in earlier eras of history; the possibilities are endless.

I guess most of the criticisms I’ve voiced can really be put down to how much I loved this comic and wish it had sequels. It’s such a good comic book, and I desperately wish there were more. Still, perhaps it’s best to not dwell on what could have been, but celebrate what is. Arrowsmith is one of the best alternate history and fantasy comics out there. If you’re looking for a fantasy twist on World War I, it can’t be beat.

And that, ladies and gentlemen, was my final comic book review on Amazing Stories. Now, if you excuse me, I have to figure out what my last book review is going to be. I’ll see you guys next time.