In China, it is not rare for artists to invite speculative fiction authors to join their art projects. Authors compose stories for the projects, while those stories can still stand alone. Some examples are Ken Liu’s “Of Trees”, commissioned as part of Singaporean artist Herman Chong’s solo exhibit, “Ifs, Ands, or Buts” (2016) and Ted Chiang’s “The Great Silence”, a collaboration with Allora & Calzadilla for their video installation “The Great Silence”(2014). But this is not the case for Xia Jia’s “Night Journey of the Dragon-Horse”. Before digging deeper into this issue, let’s first take a close look at the story itself.

The dragon-horse is a massive creature made of steel and wood, with a horse-like body and dragon-like neck and head. He awakens in moonlight, after sleeping for thousands of years. Slowly, he wanders around the desolated world and recalls the past. He meets a bat on the way, with whom he talks and from whom he learns about the world. They accompany each other and tell stories to each other for a short time, then separate and reunite shortly after. This time, they both fly.

It is a simple story, written in poetic language, with the atmosphere of a fairy tale. The story itself is a piece of delicate artwork, carved by the author with poem and dream, imagination and narration. If you are familiar with Xia Jia’s writing, you will recognize the same style in her earlier works such as “A Hundred Ghosts Parade Tonight”. However, most of her recent writings tend to focus on a near future China, as you can see in “Spring Festival: Happiness, Anger, Love, Sorrow” and the latest published “Goodnight, Melancholy”. “Night Journey of the Dragon-Horse” marks a return to her old style writing. Yao Haijun, editor-in-chief of Science Fiction World, comments that “such a world rich in images and fine in literary aesthetics is her principle and originality”[1]. However, I regard Xia Jia’s recent effort in the “Chinese Encyclopedia” (a series of short stories describing the life of ordinary people in China’s near future, including “Let’s Have a Talk”, “Goodnight, Melancholy” and several others) equally beautiful in prose and I personally prefer her realistic science fiction stories.

You can easily find rich images in “Night Journey of the Dragon-Horse”, “dragon”, “horse”, “poem”, “dream”, written in Chinese characters on the dragon-horse’s body. “Vigorous as dragon and horse” (Long Ma Jing Shen), an auspicious phrase in Chinese works here as the inspiration for the creators of the dragon-horse, as well as the spirit symbol of the dragon-horse. The bat recites famous Chinese poet Hai Zi’s most well-known lines from “With Dreams as Horses”. Awakening from the long dream, the dragon-horse cannot distinguish reality from dream and he himself is cultivated with dream and myths. The short stories in the story and the story itself are like dreams.

A keyword here is “mixed-blood”. The story is a combination of science fiction and myth, western technology and Chinese culture, just like the dragon-horse. He is built in France by mechanists, embedded with an origin from Chinese myth. He travels to China and spends years on this land, returning to France in the end. What is his motherland? Physically in France and spiritually in China? Confusion about the dragon-horse’s identity can be found in the story: “Tradition and modernity, myth and technology, the East and the West – which is this old country, which the new?” Even the bat, companion of the dragon-horse, is of mixed-blood. “Half-beast, half-bird, I sleep during the day and emerge at night to swoop between dawn and dream”. So does the bat introduce herself. This confusion of identity causes the only tension, if you have to name one, in the story. The dragon-horse has no idea of where to go, what to do, since he is not sure about his origin. He is not even sure whether he is alive. In the end, he finds those just like him, “mixed-blood creations of tradition and modernity, myth and technology, dream and reality. They are made of Art, yet they are Natural”. And thus, the dragon-horse embraces his mixed-blood identity and finds tranquility.

Now I can talk about why I mentioned stories created as part of an art project at the beginning. There is actually a dragon-horse, created and produced by the French company La Machine for the 50th anniversary of Franco-Chinese diplomatic relations. It was produced in France and performed in France as well as China, fighting with a spider as the story relates. The details of the dragon-horse in the story correspond with the actual dragon-horse in size, shape, legend, performance, rival, birthplace, talents, and other details. The dragon-horse does exist as part of a street art project. However, unlike the case with Ken Liu and Ted Chiang, Xia Jia didn’t write the story because she was involved in the project, but because she was inspired by it. She watched the video clips of the dragon horse’s performance online, not even on site, and was touched. So came the story. Apart from writing the story, she also drew a picture.

[Picture of the dragon-horse by Xia Jia]

The stories composed for art projects can also be viewed as mixed-blood in another sense. They carry the gene of both the writer and the artist, and exist as both literature works and part of art pieces. Xia Jia’s approach towards this is rather interesting. Her story, though being mixed-blood in other senses, is not mixed-blood in this sense. She collects inspirations from her life experience just as other writers do. The only difference is that the majority of character inspirations are human beings, while the inspiration for the dragon-horse happened to be an unusual theatre object, created by artists, technicians and theatre designers; this made it special. Xia Jia gives the dragon-horse character and a soul, in a world without human beings, breaking the wall between the real and fictional world. It is interesting to seek the connections and differences between the dragon-horse on the street and in the story. If La Machine happened to come across the story, it would be interesting to hear their feedback.

You can find the English version of “Night Journey of the Dragon-Horse” by Xia Jia, translated by Ken Liu in Invisible Planets: Contemporary Chinese SF in Translation. More information can be found here: http://kenliu.name/translations/collection-invisible-planets/

The story is eligible for a Hugo nomination this year as Best Short Story. Nominate it before March 18 if you like it!

Other works from Xia Jia mentioned in this review can be read online in English: 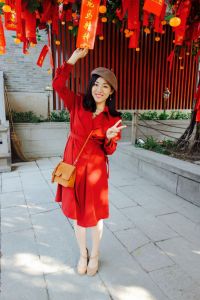 Xia Jia’s short fiction works have won five Galaxy Awards and six Chinese Nebula Awards. One of her short stories received honorable mention for 2013 Science Fiction & Fantasy Translation Awards. Her stories have been published in Nature, Clarkesworld, Year’s Best SF, SF Magazine as well as largest sf magazine in China – Science Fiction World. Besides those written in Chinese and English, her works have been translated into Czech, Italian, Japanese and Polish.

A banner year for Black comics

The Fallen Magical Girl and the Crisis of Adolescence