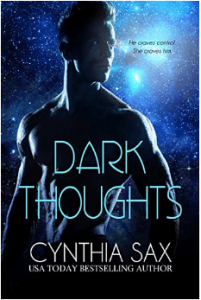 Always a few new science fiction romances to talk about! This week saw the release of Dark Thoughts by Cynthia Sax, set in her usual universe, but not featuring cyborgs this time around. It’s kind of a take on the beauty and the beast trope, except both hero and heroine have pretty grim back stories and they bond over hunting down misbehaving residents of the Refuge. I enjoyed the character arc for both and hope they get a sequel.

Can love redeem a monster?

The Refuge is home to some of the most violent beings in the universe. Kralj, its leader, reigns over the remote outpost with terrifying ease, ruthlessly squashing any rumors of rebellion, killing anyone who breaks his rules. Primitive, deadly, powerful, he’s a monster, scarred both on his face and his soul. He has never met a being he couldn’t control.

Until he meets her.

Dita has one mission—to kill the three targets claiming sanctuary within the Refuge. Or so she claims. For the first time in his long lifespan, Kralj isn’t certain of another being’s intentions. The tiny assassin is immune to his powers, her thoughts unreadable. He can’t predict her movements, can’t control her, can’t stop wanting her.

Dita is rare, as unique as he is, and, to keep the residents of the Refuge safe, Kralj will have to kill her. But first, he’ll touch her, taste her, show her how passionate the beast inside him can be. 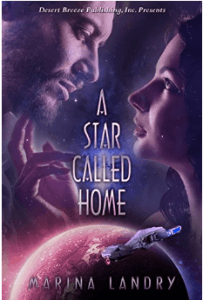 On a gentler note is Marina Landry’s A Star Called Home, which revolves around an attempt to find a good home for twelve disadvantaged kids.

Here’s her story: Jul Kisling’s heart aches for the homeless children living beyond her office window. Her father, Chancellor of the Third Quadrant of Akila, refuses to use his power to help them. Frightened but determined, Jul secretly searches for transportation to bring some of the children to a newly-colonized planet.

Marc Prejean is an out-of-work, out-of-money Earth starpilot living on the land of his Cajun ancestors. Wrongfully convicted of smuggling and recently released from forcedsleep, he reluctantly agrees to Jul’s proposition. His desperate situation, the betrayal of his wife and brother, the loss of his starpilot license, and his stolen six years have left Marc angry and withdrawn.

Marc and Jul begin a journey of agonizing mistrust, smoldering sexual desire, and the shared goal of safeguarding the twelve children. Pursued by ruthless adversaries on both sides of the law, they soon realize they are delivering the children into even greater danger. 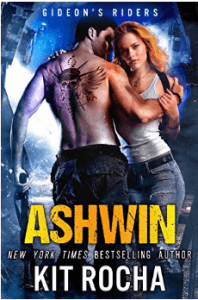 New York Times Bestselling Author Kit Rocha has kicked off a new series with Ashwin (Gideon’s Riders Book 1) and since I love dystopian tales and cold ruthless heroes who find their hearts (think of Nalini Singh’s Arrows), I one-clicked.

The plot: Lieutenant Ashwin Malhotra is a Makhai soldier—genetically engineered to be cold, ruthless. Unfeeling. His commanding officers consider him the perfect operative, and they’re right. Now, he has a simple mission: to infiltrate Gideon’s Riders, the infamous sect of holy warriors that protects the people of Sector One.

He’s never failed to execute an objective, but there’s one thing he didn’t anticipate—running into Dr. Kora Bellamy, the only woman to ever break through his icy exterior.

When Kora fled her life as a military doctor for the Makhai Project, all she wanted was peace—a quiet life where she could heal the sick and injured. The royal Rios family welcomed her like a sister, but she could never forget Ashwin. His sudden reappearance is a second chance—if she can manage to touch his heart.

When the simmering tension between them finally ignites, Kora doesn’t realize she’s playing with fire. Because she’s not just falling in love with a man who may not be able to love her back. Ashwin has too many secrets—and one of them could destroy her. 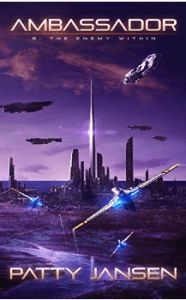 I enjoy reading a good murder mystery at times and I’m totally in awe of authors who can combine the required elements of a mystery with science fiction. Patty Jansen offers the sixth installment in her Ambassador series, which while not falling into the romance subgenre, offers an intriguing story.

The book blurb for Ambassador 6: The Enemy Within: Two men went on a surfing trip in a remote area. Only one came back, accused of murdering the other.

Not quite, because the alleged murder happened on another planet, the accused is a member of the secretive Pretoria Cartel of super-rich business tycoons–with illegal off-Earth ventures–and the only person who can remotely be called a witness is an alien, the elder Abri from the Pengali Thousand Islands tribe.

Diplomat Cory Wilson is asked to accompany Abri to the Nations of Earth court, but when he and his team arrive there, their contacts have been moved to different cases, their rooms are bugged and their movements restricted. No one is answering their questions, but it is when a lawyer is murdered and Cory’s team captures a mysterious stalker that things get interesting.

Just as well they are prepared in the usual way: alert and highly armed. 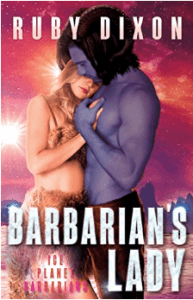 And I’ll close with the latest entry in Ruby Dixon’s ever popular Ice Planet Barbarians series – Barbarian’s Lady. Seems readers can never get enough of these blue guys!

You’d think a tall woman would fit in on a planet of seven-foot-tall aliens, but even on the ice planet, I’m still a weirdo and an oddity. I’m everything all the other cute, dainty human women aren’t.

One guy in particular – the alien Harrec – is determined to embarrass me by pretending he’s interested. He’s a jokester that flirts like mad and hits on me constantly just to make me feel foolish. He gets under my skin. He makes me so frustrated I want to scream.

When a side-trip to a glacier turns into a nightmare and the two of us are forced to survive alone, I see another side to the enticing blue alien. Even with no one else around, his compliments keep coming and I start wondering if the attraction between us…is real.

Is there a subgenre of science fiction romance that you especially enjoy reading?

Publisher’s Note: Due to a scheduling error this post appears today.  It was originally scheduled for 3/16/2017