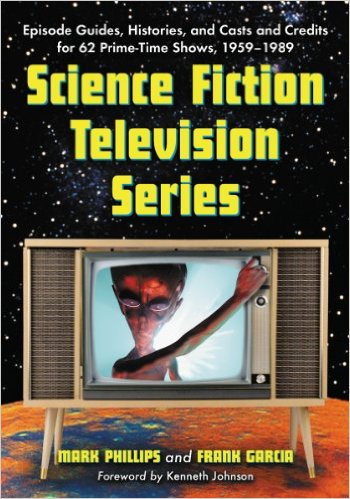 Science fiction series on television have had a real hit-and-miss history. There are some that are classics and that stand the test of time. In this era of dvd collections, Netflix and other streaming services or Youtube, older science fiction television series are popping up all over the place.

But how do you make sense of it all?

That’s where Frank Garcia and Mark Phillips come in. They have written Science Fiction Television Series, a comprehensive reference book in two volumes that covers science fiction television series from its earliest beginnings up to 2004.

From Alien Nation to World of Giants, Volume one of this reference work provides comprehensive episode guides and cast and production credits for 62 science fiction series that were aired from 1959 through 1989. For each episode, a brief synopsis is given, along with the writer and director of the show and the guest cast. Using extensive research and interviews with writers, directors, actors, stuntmen and many of the show’s creators, an essay about each of the shows is also provided, covering such issues as its genesis and its network and syndication histories. 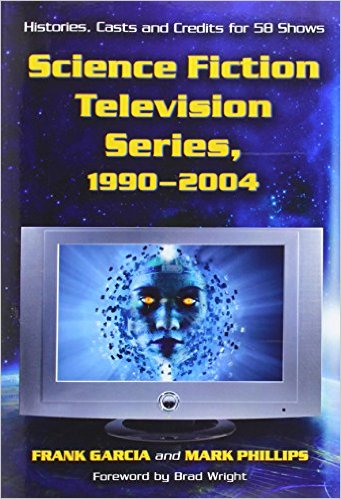 Volume Two is a detailed examination of 58 science fiction television series produced between 1990 and 2004, from the popular The X-Files to the many worlds of Star Trek (The Next Generation onward), as well as Andromeda, Babylon 5, Firefly, Quantum Leap, Stargate Atlantis and SG-I, among others.

And these volumes are massive! The first book covers sixty two separate science fiction television shows and clocks in at a whopping 691 pages in hardcover (the trade softcover was split into two volumes). The second book covers fifty nine shows and is 421 pages. And the information in the book is equally impressive.

Each series gets its own chapter and each chapter includes essential production information; a history of the series; critical commentary; and amusing, often provocative interviews with more than 150 of the show’s creators, actors, writers and directors. The book also offers updates on each series’ regular cast members, along with several photographs and a bibliography. This is all information gathered specifically for this volume. You won’t find much of the information in these chapters anywhere else, even in the age of Google. The work that has gone into these books is staggering.

The books were written by Mark Phillips who has written for Cinefantastique, Filmfax, Outre and Britain’s TV Zone and lives in Victoria, British Columbia; and Frank Garcia, a science fiction media journalist whose work has appeared in Cinefantastique, Filmfax, Starlog, Video Watchdog and other publications. Frank lives in Vancouver, British Columbia.

What made these two Canadian writers decide to do this?

For Mark Phillips it had to do with truly wanting to document these shows that have played such an important part in pop culture. “In seeing how listless and inaccurate many of the studio press kits were for 1960s/1970s shows, I wanted to dig deeper, correct the errors and find the real stories,” Mark says. “As well as to speak with so many TV heroes and heroines of my childhood. I was driven by a true interest in the making of these shows, so it was never work, it was really a series of awe-inspiring revelations for me.”

For Frank Garcia it was a desire to cover all these “old forgotten SFTV shows” that often did not get documented. “We knew there were a lot of untold stories and that they were not “collected”. Sure we had Starlog and CFQ and all those other magazines but the information was all scattered. We also knew that it would be a massive effort. We just didn’t know (reality bites!) how long or how much of an effort it would take!”

And they were right about untold stories. “That’s one of the major things we accomplished with the books,” Frank explains. “We were able to spotlight the cast and crew’s experiences in making those SFTV shows and they were very generous in giving us their stories. I still think I’m the only guy to go back and talk to the stuntman Fred Waugh, who did all the wall-crawling stunts for the Spiderman TV series. Same with Nick Hammond, who is rarely heard from about his work on the show. And I got to solicit Stan Lee’s comments about the show! With Mark being the expert on the Irwin Allen series, HE was able to snag a lot of different people from that era and older forgotten shows like Men into Space.”

The two volumes are exhaustive and compiling them took a lot of the writers’ time, more than they realized it would when they started out. “It ended up being a 5-year journey,” Frank says. “We ended up spending 9 years of our life doing the work. Book 1 took about 5 years to produce, Book 2 took about 4 years (+ Internet and book experience, and no episode guides!) to produce.”

If they had know it was going to take so long, would they have even begun the project?

“It’s always cheating to go into ‘hindsight’ questions,” Frank says. “None of us ever really knows what will happen. But if magically we were given this information it would certainly give me pause. We both agree that we were VERY naive when we took on the project – ‘Yeah, we can do this!’ – and we gave ourselves a very big mountain to climb when you consider the number of shows we decided to document. It was really balancing real life and the project for so long. A lot of people in our lives were caught up in that – ‘When are you guys going to finish that thing?’ – and it was hard to explain why it took so long. but we ended up also having to give ourselves limits of how many interviews per chapter to tackle in order to contain the project.

“Many times, I may have wanted to give up, but at the same time we were productive and we saw the potential of what we were building. Passion was an essential element to continuing the project. We divided up the series titles according to the ones we were interested in, or had knowledge of. We were driven by a desire to talk to this or that person connected to a show. Being Starlog writers gave us the confidence and experience to know that we could write and create.

“In the early days I was so excited about what we were doing that I’d frequently call Mark long distance and say, ‘Hey! (Big name star!) said yes to an interview! Yay!’ But as the project progressed, and despite good responses to interview requests, it became routine to just write, ‘Yeah, this big name person said yes!’ And those names were people we KNEW had not been interviewed about their old, dormant series because no one else cared. We cared and wanted to hear what they had to say. And many shows were half-seasons, or 5 or 6 episodes only seasons. It was a gold mine, to us, to hear about those shows because we wanted to know why did the show work out that way? What were the stories behind the cameras? Sometimes the stories behind the series (ie., network politics, etc.) were more interesting than the show itself!”

“One aspect of collaboration is that two authors don’t necessary always see things the same way,” says Mark. “But whatever difficulties Frank and I may have had on occasion with the book projects, we resolved them well – I would not have done this book with anybody other than Frank. He understood journalistic ethics well and we were a team when facing outside problems relating to the book.

“I think Frank would agree, I was more interested in the subject matter (for book 1) from a personal aspect than he was – there were long-standing questions I had about, say, Star Trek, Twilight Zone or Voyage to the Bottom of the Sea, that I wanted to solve, and I was genuinely interested in shows like Planet of the Apes and Fantastic Journey, so discovering new stories and speaking with cast members of these shows was a joy. There wasn’t a time when I wanted to quit with book one, even though I had a lot of other things happening in my life. The content reflected my interest. And for some reason, I can still zero in on the fun, strange or bizarre events that happened with practically every interview I did (actor Roy Thinnes letting my phone ring over 20 times before I could get to it at 5:00 am; providing producer Aaron Spelling with a rare copy of his 1969 New People pilot; and DeForest Kelley unexpectedly telling me all about his old turtle, Myrtle).

“We also had many interesting times, like sitting with Starlost director Ed Richardson as he watched one of his Starlost episodes in person at his Vancouver office, seeing this episode for the first time in 20 years. His comments were priceless.

“On the other hand, book two was NOT an easy task – I personally wasn’t that interested in the shows and it seemed like an uphill battle all the way, despite having Internet access, which I didn’t have for book one.”

Frank concurs. “What’s great and what really made the project work was that our show interests rarely overlapped. He was the 1950s-60s guy and I was the 1970s-80s guy. We covered those eras and it made the project bigger with better coverage – and we swapped interview quotes whenever we got interviews that covered different titles.”

After such a massive undertaking, it might be tempting to retire from writing.

“Mark is still writing, but I’m very retired,” Frank says. “The last thing I wrote was a CFQ website story on the Raiders Adaptation kids and a Harlan Ellison retrospective essay that was published in a program book for a convention in Madison, Wisconsin. I got a t-shirt out of that!”

So there’s no chance of a third volume?

“Oh we’re VERY done!,” Frank says. “Though if anyone else wants to carry it on we’re okay with that!”

Science Fiction Television Series, both volumes one and two, are available to order from McFarland Books. Book one can be found here. Book two, here. Or you can read more about it here.