Home Review Review: Mad Shadows II – Dorgo the Dowser and the Order of...

“The cat had white fur and large pink eyes, and she was sitting on my table, watching me finish my dinner. She didn’t purr or twitch her tale. She just sat there, watching me.” 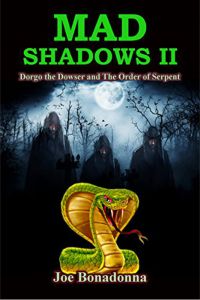 This is how the story Mad Shadows II: Dorgo the Dowser and the Order of the Serpent by Joe Bonadonna begins. A mysterious cat appearing out of nowhere in this prologue, disturbing the speaker more than the well-dressed, pipe smoking cyclops standing at the bar. Welcome readers to this weird world where strange things are normal and normal things are even stranger. This is the author’s style.

One of the most powerful tools in literature is hooking the reader with the very first sentence. If you can secure a reader’s interest with the raw curiosity of a fresh idea, the adrenaline inducing shock and awe of some astonishing action, or simply some well-structured prose that plays like a symphony to the mind, the pages that follow are sure to be turned.

Unfortunately, as eye catching and intriguing as Bonadonna’s introduction is, the spelling of the word “tale” in the review copy is quite distracting. Either this is a brilliant play on words suggesting that the cat (who we discover is named Chrystal) has a backstory but doesn’t want to divulge it, or this is simply an embarrassing editing gaff that was corrected in the final publication. Either way, the odd spelling does throw up a red flag. And having this occur in the opening sentence of a book can be detrimental to judicious readers. Luckily, this is one of the few oddities in an otherwise well written “tale.”

Dorgo Mikawber is a dowser who uses his divination powers to seek out paranormal entities. As our narrator, he is a flawed hero who fits comfortably in this fast-paced story, a good mystery saturated with some absorbing supernatural elements. Though the book in its entirety centers around Dorgo’s journey in search of the Order of the Serpent, the story is broken up into three individual tales. It’s kind of like a mini trilogy, collected in one small volume to give the reader the completed journey.

Even broken down into separate stories, in Mad Shadows II: Dorgo the Dowser and the Order of the Serpent Joe Bonadonna has a defined knack for setting the scene and drawing readers in.

Here are the opening lines of each segment:

Part One: The Girl Who Loved Ghouls

“The Noise and laughter of children playing in the streets greeted me as I left the livery where I had stabled my horse and headed toward my rendezvous with Valuta Jefoor.”

Part Two: The Book of Echoes

“She came out of the night like a ghost set against a backdrop of snow, shadow and dark forest.”

Part Three: The Order of the Serpent

“Her name was Jivvy Trenovis, a pretty young woman in her early twenties, with sienna-hued skin beginning to turn blue from the cold.”

Mad Shadows II: Dorgo the Dowser and the Order of the Serpent is a fun read by Joe Bonadonna and a testament to his unique style of spinning a tale. Given the title, readers may also want to check out the author’s first installment (and Bonadonna’s first novel) in the Mad Shadows series, The Weird Tales of Dargo the Dowser. Between these publications, Bonadonna also penned the space faring story Three Against the Stars, and the sword and sorcery adventure Waters of Darkness (co-authored with David C. Smith)

With some luck (and maybe a little magic), there will be plenty more tales of Dorgo Mikawber’s adventures in the future.