Gu Shi’s novella “Chimera” mixes hard science with Greek mythology in a way that makes it worthy of Chinese and international awards.

For a long time, the novelette and novella market for science fiction in China has been rather small. Very rarely did you see medium-length stories published in magazines, not only because of the limited number of pages in magazines, but also due to a lack of qualified stories. As a result of the situation, there have been years with a vacancy in the Gold Award for Best Novelette/Novella of the Global Chinese Nebula Awards. However, in 2016, we were glad to see two Gold Awards handed out to “When the Sun Goes Down”, by Zhang Ran (张冉) and “Chimera”, by Gu Shi (顾适). What’s more, “Chimera” has already been translated into English and is eligible for the Hugo nomination this year for Best Novella.

The story is rather “hard” in scientific details, yet smooth in narration and delicate in emotion. There are two narrative lines in the story. In the not-so-far-away future, the protagonist, a talented female biologist, creates a human-pig chimera to save her only son Tony at the request of her ex-husband Evan. She left Evan and Tony as soon as the latter was born; now, she’s ready to make amends. And more than 100 years after the first story, police officer Luo Ming is investigating a case related to a cultivated organ. A spaceship carries a giant chimera that keeps being used to cultivate organs for customers in their pursuit of longevity, but something has gone wrong. Luo Ming is closing in on the top secret of the spaceship.

The two storylines are knitted together with elements of Greek myths, not only as dressing to the story, but also as metaphors. After finishing the entire story, you will find that the relationship between the two narrative lines is not only chimera: the plots are hooked together very well, but how is not revealed until the very end. You can sense that the author is not playing with words. Instead, she takes great effort to compose the story little by little with sincerity. The result is definitely satisfactory. Readers will feel surprised but not fooled.

There is no doubt that the most charming, sophisticated and unique character in the story is the female scientist. But interestingly, her name is not mentioned at all. She is always “she”, the one. The narrative point of view switches between Evan, Tony and Luo Ming, three male characters related to her in one way or another. But as for her, readers have never been able to step into her mind. She is so different – “like a curious child, afraid of nothing, intent on finding out what the world beyond the fence is like”. Sometimes, she is perfect, cold and calculating, while under other circumstances, she is confused, afraid and loving. It is not common to see such well-rounded female characters portrayed in Chinese science fiction stories, especially from the pen of male authors. Actually, the protagonist in the first draft was a man, not a woman. Half-way through writing the story, the author found it clichéd and started all over again with a female protagonist. This works much better.

During the writing, Gu Shi also consulted a friend who is a biologist on those scientific details. The story benefits a lot from hard science, and at the same time, scientific development will probably follow what the story projects. Recently, Gu Shi has been approached by a reader showing her a paper on human-pig chimera published in CELL in January, 2017. Gu Shi told me that she was shocked when seeing the eye of that chimera.

In an interview with Tecent, Gu Shi confessed that she didn’t see much difference between the writing of male and female authors, thus being a female didn’t bring her any pros or cons in writing science fiction. Instead, from her perspective, writing is an equal thing which should not differ due to gender.

Working as an urban planner, Gu Shi writes speculative fiction in her spare time. Neither job is easy. After reading so many stories online, she realized that the one she favored most had not appeared, so she started to write it herself. Her writing career can be dated back to university; she started with romance rather than science fiction. Later on, she tried science fiction, mystery and other genres. Science fiction is not the only genre she’s fond of, but absolutely the one that has won her the biggest reputation in recent years. Apart from the Chinese Nebula awarded for Chimera, Gu Shi was also awarded the Silver Chinese Nebula Award for Best New Author in 2014.

You can read the English version of “Chimera” translated by S. Qiouyi Lu and Ken Liu in Clarkesworld: http://clarkesworldmagazine.com/gu_03_16/

The story is eligible for Hugo nomination this year as Best Novella. Nominate it before March 18 if you like it!

Gu Shi is a speculative fiction writer and an urban planner. A graduate of Shanghai’s Tongji
University, she obtained her master’s degree in urban planning from the China Academy of Urban Planning and Design. Since 2012, she has been working as a researcher at the academy’s Urban Design Institute. 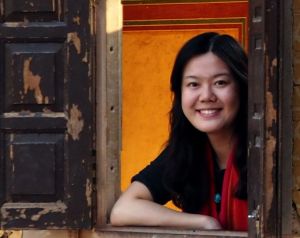 Ms. Gu has been publishing fiction since 2011 in markets like Super Nice, Science Fiction World, Mystery World, and SF King. Notable works include “Chimera,” “Memory of Time,” and “Reflection.” In 2016，she won the Gold Award for Best Novella at the Chinese Nebula (Xingyun) Awards with “Chimera,”. Currently, she’s working on her first novel, The Reign of Eternal Delight, an alternate history set in the court of the first Chinese empress ruling in the dynasty founded by Wu Zetian.

A discourse on the author Stephen King. (This post originally appeared here in Spanish).