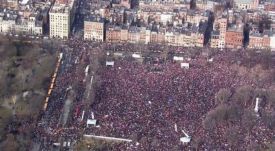 SPECIAL NOTE:  The Women’s March on Washington was a phenomenal success – the largest protest in US History – as were numerous satellite events in cities across the country and around the world.