Post-apocalyptic stories have a typical formula we’ve grown to accept, and in some cases, expect. So, when a book comes along that turns that distinctive recipe on edge and mixes in an allotment of intriguing characters, readers are going to take notice. 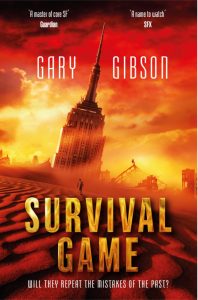 Released in November 2016 from Pan Macmillan Publishing, Survival Game is the latest work by Gary Gibson in his exciting, multi-leveled disaster series. A fitting follow-up to Extinction Game (September, 2014) previously reviewed here at Amazing Stories, Gibson continues to bring us a different perspective, and in this case perspectives, on a world gone wrong.

Though both books are stand-alone stories that are compelling individually, they do have theme and character links that will draw readers to one after reading the other.

Survival Game is told in first person by Katya Orlova, a scientist forced to track down an artifact known as a Hypersphere. It is an instantaneous teleportation device “designed for the purpose of establishing stable traversable links to alternate universes.” As the players around her struggle to gain the Hypersphere for their own purposes, Katya must use her vast understanding of the device and the friendships she makes along the way to save the connected worlds from certain terror.

In dealing with alternate realities, authors have a kind-of carte blanche when it comes world building. Thankfully, Gibson leans heavily on historical references and true elements of the human condition to bring authenticity to a story that centers around a theme of many truths. The Cold War may not have played out the same way in every alternate reality, but we certainly feel the nuances of global tensions, and astute fans will assuredly spy (pun intended) the author’s historical influences.

Another unique aspect of this series is the repetition of the word “game” in the titles. Though the word references an “activity engaged in for diversion or amusement” as well as “animals under pursuit or taken in hunting” (per Merriam-Webster), after reading both books, it seems more appropriately interpreted that the series is a conscious reflection to the competitive nature to survive dwelling within humanity. Though Gibson’s artful worldbuilding sets the stage for this series and will probably draw the most interest from fandom, it is the emotionally-driven characters and their curiosity about alternate possibilities that makes this story so compelling.

Survival Game is the second installment in the post-apocalyptic “Game” series, but it is also billed as an “Apocalypse Duology,” a bold diversion from the popular literary “trilogy” format we’ve come to expect. So, does this mean that this is it? Is this the end? Does this mean that memorable characters like Jerry Beche and Katya Orlova are truly lost forever in their alternate worlds? As a fan of the series, I’d like to never say never. In the realm of alternate universes, there will always be new places to explore and new people to meet. Perhaps author Gary Gibson will someday return to these differing worlds, and perhaps the games people play will be replaced by the wonders of discovery.

Palindrome week (no, NOT camels!); lots of scrolling, Deutscher Priz, Creative Arts Emmys, Talk like a Pirate – rrrrrrrrr – and more in this week’s File 770 roundup