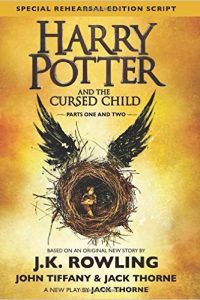 I know I’m a bit behind the times when it comes to reviewing Harry Potter and the Cursed Child by John Tiffany, Jack Thorne & J.K. Rowling; but since it won the 2016 Goodreads Choice Awards for Best Fantasy I thought now might be a good opportunity to revisit the eighth Harry Potter story.

Most people know that Cursed Child is actually a play and the “book” is just the script and that is no more apparent than with the opening scene. The story begins exactly where Harry Potter and the Deathly Hallows ends. We witness Harry and family once again arrive at platform 9 3/4 to drop off Albus Severus Potter for his first day at Hogwarts. The scene hits almost all the major beats of the seventh book’s ending, with some differences. Some lines are added, modified or removed, such as any and all references to Edward “Teddy” Lupin, which bugged me probably more than most people because Remus Lupin was my favorite character and I was hoping his son at least would have a role in the play, but I was wrong.

Now I know that when telling a story in a different medium, changes need to be made, but that usually happens only when you adapt something, such as a book into a movie. Cursed Child is not at adaptation, but a new story meant to first be told on the stage, so I’m not sure why it was necessary to make those changes to Deathly Hallows. It gives Cursed Child a feel that it is not really canon, despite having Rowling’s name on the cover, but I will get into that more later.

Our story’s first major twist comes when Albus is sorted into Slytherin, not Gryffindor, as everyone would expect a son of the famous Harry Potter. In fact, living in the shadow of his father is made even worse when Albus discovers he is not very good at magic and life at Hogwarts becomes almost unbearable. Albus’ sole comfort is his friendship with Scorpius Malfoy, son of Draco Malfoy. Scorpius, too, finds life at Hogwarts to be torture, not only because of his family’s reputation for dark magic, but also because of a persistent rumor that he is actually the son of Voldermort. Thus unified in their deep dislike for their fellow Hogwarts students, the two friends suffer together as the years tick by.

I actually liked this aspect of Cursed Child. Too many people forget that school was not always fun for everyone. School could be a place where you’d face daily embarrassment and rejection. Plus, there would be no opportunity for you to become the hero by winning the big game or defeating the dark wizard as you see in the movies. You just suffered through it and looked forward to the day you would never have to return. Now if you enjoyed school, great, don’t let my personal experience take that away from you, but Cursed Child at least introduced a little realism about school life into this fantasy universe and I give it kudos for that.

Anywho, Harry is still an important character and his relationship with Albus provides much of the conflict. Harry honestly doesn’t know how to connect with his troubled middle child, so instead he throws himself into his work as dark magic is on the rise again and someone needs to deal with it. When Harry uncovers a new Time Turner he is confronted by the aged Amos Diggory who demands Harry use it to save Cedric. Harry refuses, but Albus eavesdrops on them and becomes inspired to do what the great Harry Potter never could: save Cedric Diggory. With the help of Scorpius and Amos’ niece, Delphi, Albus sets off to steal the Time Turner and rewrite history…and that plan goes off as well as you can imagine.

I’m not going to lie to you, I did enjoy reading Cursed Child; but I think it was more in spite of the book than because of it. My wife and I are both huge Harry Potter fans, but couldn’t bring ourselves to wait while the other person finished the book, or buy two copies. Instead we took turns reading to each other. I made some valiant attempts to give each character a distinct voice and my Dumbledore and Snape were pretty good in my humble opinion. That said, the fun I had reading the story with my wife didn’t mask the flaws of the story.

In many ways Cursed Child could have been called Harry Potter and the Wonderful Life, because it had a similar message at the end. Albus and Scorpius do manage to change history by sabotaging Cedric in the Triwizard Tournament from Harry Potter and the Goblet of Fire. The first time they do it they don’t prevent Diggory’s death, but instead have Albus sorted into Gryffindor and have Hermione and Ron never marry or have children. The second time they do it, it leads to Cedric becoming a Death Eater who ensures Voldermort’s victory at the Battle of Hogwarts.

Truth be told, as an alternate historian I enjoyed this dark version of the Harry Potter universe. Getting a brief glimpse at what life would be like under a triumphant Voldermort was terrifying, but it was brief and the point of divergence was not presented well. Instead of seeing Cedric alive as a Death Eater, we are just told instead he was one. Considering plays are a visual medium, I’m not sure why they decided to tell and not show, but whatever. History eventually resets itself and father and son learn to appreciate each other…but did they really need to create more than one alternate reality to do that? In fact I always thought time ran on a more deterministic fashion in this franchise, such as it did in the Prisoner of Azkaban. In that book, Harry and Hermione travel back in time and do all the things they were already meant to do. If there was even a slight chance that time could be altered, why the bloody hell would the Ministry of Magic let a student use it just for school?!?!

Another aspect of the victorious Voldermort timeline that bothered me was the adults’ reaction to learning how the kids’ meddling with time created the aforementioned grimdark universe. You would think accidentally resurrecting magical Hitler would be the equivalent of a Muggle shooting up a school, but surprisingly the adults’ reactions were relatively mild. In fact characters often did not act at all like they did in previous books. Take Ron for example, who in the main timeline is running the Weasley joke shop and often cracking jokes every time he is in a scene. In the dark timeline, he is a bumbling rebel who makes you question how the hell he survived this long without finding out what is on the other side of that veil.

I know Ron has a reputation for being Harry’s goofy, not-as-talented sidekick, but I never bought that image of him. In terms of magical talent, he was just as good as Harry was at most forms of magic if you don’t count those skills that Harry was cursed with, like parseltongue. In fact, Ron was usually Harry’s first choice on who to take in a dangerous situation. Plus, while he did have the occasional joke in the earlier books, he wasn’t Fred or George level of funny.

Considering all of these issues together, Harry Potter and the Cursed Child comes off more like a well-written Harry Potter fan fiction instead of being the eighth book in a beloved fantasy series. It does have a few good ideas here and there, especially the Scorpius/Albus friendship and the truth behind the Hogwarts Express’ trolley witch, but the over-the-top insanity present in the story reminds me more of someone who is a Harry Potter fan with a lot of imagination and not J.K. Rowling herself. Does that mean it doesn’t deserve the Goodreads nod? Well I can’t honestly say it doesn’t because I didn’t read any of the other nominees…but this is why I don’t always like awards where everyone can vote. A book with a big name author attached to it or else otherwise marketed better, can outperform any other competitors just because your average reader doesn’t have time to read every single book published.

And yet I still enjoyed the story even if my review comes off more like I didn’t. In fact this review is all over the place so I will end it by saying: if you really like Harry Potter, check out Harry Potter and the Cursed Child. To be fair it’s a bizarre story that doesn’t necessarily mesh with the universe it is supposed to inhabit. Nevertheless, because of the changes it makes to the ending of Deathly Hallows, you can enjoy it as non-canon Harry Potter story unconnected to the previous tales if you want. I certainly am going to do that.