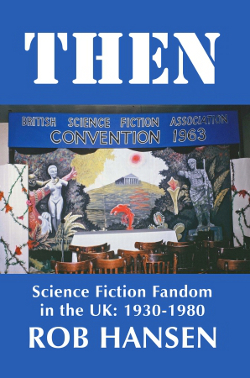 David Langford, now of Brexit Land, was kind enough to send along a copy of Rob Hansen’s magnificent history of UK fandom for review: I think he knows I’ve got a soft spot for fannish history.

I’ve now had a few moments stolen here and there to thumb through the paperback edition (there’s a hardback as well and an ebook coming soon), to read the introduction and to get into the first few chapters, as well as thumbing through the rest.

Much of the material from Hansen’s history is available elsewhere on the web and is, therefore, already familiar, but let me tell you: you want to put this book on your shelf.

Ansible Editions has done a wonderful, fantastic, marvelous and outstanding job of presentation; the book is replete with fascinating illustrations of UK-based fanzines and images of legendary fans, many of whom most of us have only read about in passing. The end matter (comprehensive listing of UK conventions among them) is equally fascinating and important, especially for readers who have volumes by folks named Warner and Moskowitz on their shelves (in the history section, of course).

My one line summary of the history revealed in Then is this: UK Fandom – Doing More With Less.

One can’t appreciate that statement without delving into the pages of Then.

Which I’ll be doing more of in the near future, once I’ve had a chance to finish reading it.

In short: David Langford’s Ansible Editions has turned out a wonderful publication and Rob Hansen has deftly filled a hole in an important chapter of science fiction fandom with this book.

Copies can be purchased here. There’s also a ToC and links to online resources.

If you’ve never hopped across the big pond, here’s your chance!

Despite the fact that the UK and the US are two countries divided by a common language, what I have managed to read in detail about the nascent, fumbling moves towards organized fandom in the UK are remarkably similar to the journey to fandom in the US:  gobsmacked by the visions presented in Amazing Stories, readers began seeking each other out;  short day trips  by singular individuals quickly morph into the desire to do more;  by means both fair and foul, fans publicized their efforts and expanded their contacts.

But when you sit back and realize the differences in size – the size of anything – land mass, population, economy – between the US and the UK, the accomplishments of US fans seem to pale somewhat,  (By way of illustration:  Amazing Stories, and later Wonder Stories, pulps that printed letters by fans that included addresses allowing for contact, were all US publications:  British fans had to be lucky enough to find a copy, and even luckier to find one that had a letter from someone in the UK.)

We can dispute who held the very first convention endlessly, but never which country’s fans did the heavier lifting towards fandom.