Fifty years of Star Trek…and we’re still no closer to a peaceful, democratic world government or warp drives than we were in 1966. What gives? Of course, Gene Rodenberry’s iconic future history also predicted an eugenics war in the 1990s, and we managed to give that a miss, so maybe the reality hasn’t been all bad.

Thinking back 50 years, to when I first saw the debut episode of Star Trek on Toronto’s Channel 9, CTV, is as easy as a subtle gesture of the hand and the quiet word, “engage.” I was 15 in 1966, and no stranger to science fiction. I didn’t read much science fiction, which in those days could be difficult to find. It was never mentioned in English classes, except for one Bradbury story we were led to think of as “literature,” and almost none could be found in the school library. There was little in the public library in Toronto, either, and a search of paperback rac 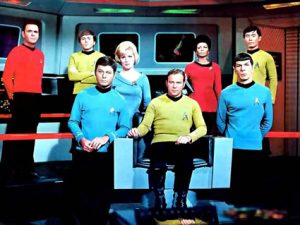 ks in the neighborhood convenience stores only occasionally turned up a Stars My Destination or Childhood’s End among the dominating presence of English armchair mysteries, Hollywood whodunnits, war stories, Bennett Cerf collections and middle-brow literature such as Pearl Buck and Grace Metalious. Yet, although I had not discovered science fiction as a genre, I had an appetite for it. I called it “space stuff.”

Television was more generous in  giving up its genre treasures, so that by 1966 I was a regular viewer of Lost in Space, Fireball XL-5, The Twilight Zone and anything else that smacked of SF. I also remembered Science Fiction Theater and Men Into Space, although I had not seen much of them because I had been too young when they first aired. I read science fiction comics like Magnus Robot Fighter, Tales of the Unexpected and Space Family Robinson. Yet, as much as I enjoyed all this, I was aware that most media SF was either not truly SF, was aimed at younger children or was hopelessly stodgy. I was more than ready for something better.

Something better came in the form of regular promotional spots on TV, all through the summer of 1966. An odd looking object that looked a bit like a folding camp stool of some sort grew larger on the screen, until it tilted its saucer-like main structure toward the viewer so that you could see inside. The matte job was horrible, but didn’t detract at all from the sense of wonder as you saw people inside, dressed in colorful, casual uniforms, bustling about the business of running whatever marvelous sort of contraption this was.  Then the title STAR TREK appeared over everything, accompanied with the swell of an exciting fanfare!

Nobody had ever heard those words before I did, watching that spot on TV. NOBODY! Now, fifty years later, you cannot imagine the excitement I felt.

Then again, maybe I’m imagining all this, and William Shatner never said those words until the first episode aired, on September 6th. It doesn’t matter. The promos had me well-primed to hear them, in any case. I probably had all my rocket models and maybe some of my SF paperbacks spread out around me as I sat on the floor and tuned in to CTV, which was premiering Star Trek in Canada. That’s right…I saw it two whole days before all you American readers. And heard the “Final Frontier” speech years before millions and millions of mere re-run Trekkies.  Eat your hearts out.

The first episode aired, unfortunately, was “The Man Trap.” Not a bad episode in itself, but disappointingly conventional, revolving around an alien monster that masquerades as human but sucks our blood. It harked back to all those 1950s SF films, half of which were “monster movies,” and are – for the most part – deservedly forgotten. The second and third episodes, “Charlie X” and “Where No Man Has Gone Before,” would have been much stronger openers, but apparently the network was too nervous to start with anything that might be too novel for the audience.

I watched Star Trek religiously, every week, for three years. I bought the paperback collections that James Blish adapted from the scripts – going so far as skipping lunch so that I had the money to buy them. Seventy-five cents was a lot more money in 1967 than it sounds today.  I bought the AMT model kits of the Enterprise and the Klingon Bird of Prey, for likely $1.95 each. One or two other kits appeared over the next few years, but there was surprisingly little media tie-in in those days. I drew the line with the comic books, which seemed execrably drawn to me. The gush of toys, games, t-sh 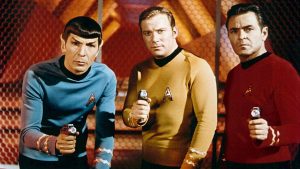 irts, action figures, bubblegum cards, desktop displays, sheets and pillowcases, candy bars, Christmas ornaments, coffee cups, cufflinks and all the rest of that shit stuff all came later, along with Star Trek on the big screen and its own humongous fandom.

There were no Star Trek conventions. There was no organized fandom, separate from science fiction fandom. At SF cons, opinion was divided between fans who thought Star Trek didn’t count as real science fiction, and those who embraced it. Those who denounced Trek argued that all the ideas were borrowed from the written genre, and the action and visual spectacle showed it  to be clearly related to other television adventure shows like Gunsmoke or 12 O’Clock High. Advocates simply excused the television values as an inextricable part of the medium.

NBC made its fatal mistake in 1968, when it nearly canceled the show. A massive fan-based write-in movement convinced the executives of the network to reverse their decision at the last minute…but the third season was uneven at best, and ratings remained poor…if not worse, due to a bad time slot and slashed budgets. It was only a rumour that “Who will rid me of this troublesome program?” was heard through the half-closed door of the NBC president’s office.

And then it was all over.

At least until Paramount acquired the rights from Desilu and made the first, overblown movie a few years later.

As for me, despite my love affair with the original series, I let Star Trek go gracefully, and was never tempted to become a Trekkie. For one thing, the animated series sucked. I saw it premiered at Torcon II, in 1973, and there was no way to overlook the third-rate animation, nor that Larry Storch provided virtually every voice that was not from the original cast (which meant that everyone sounded like Corporal Agarn from F Troop to me). For another, I was deeply into science fiction fandom by then, and saw no reason to narrow my horizons from ALL of  Science Fiction to just one television show…which some stubborn fans still argued wasn’t really SF…

The movies, when they began to make them, weren’t all that hot, either…most of them. The Blish paperback adaptations gave way to Alan Dean Foster adaptations, then original novels by upcoming Trek fans/wanna-be-writers, and finally to literally tons of tie-in material. I sold off most of the paperbacks, and vowed not to get caught up in this madness. In one respect, I failed. I was a sucker for the starship models…and later starship replicas…and today I have an embarrassingly large assortment of Galaxy class starships, Birds of Prey, Warbirds, D’deridex class Romulan cruisers, D’7s, Ferengi Mauraders, Cardassian what-in-hell class ships, etc.

Otherwise, Star Trek was dead in the water to me. The endless stream of mediocre large-budget movies were something I could wait to appear as “previously viewed” copies at the video store before ever seeing.  (Same with that mindless upstart, Star Wars, come to think of it). 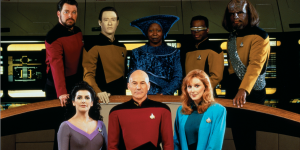 But eventually 1987 came and a new iteration of Star Trek began in The Next Generation, followed by Deep Space Nine in 1993. I was skeptical at first. None of these people looked like the adventurous, ethnic stereotypes I remembered from The Original Series! Why is that guy painted like a mime? How come the captain is an old, bald guy? Who is the woman with the horrible hair, and why is she allowed to wear lavender pajamas? Why is the Enterprise so fat? Yet the moment the NCC-1701D swelled into view, spreading out like the Andromeda galaxy in the main viewscreen, I was hooked…and felt the old excitement of the Original Series again.

A number of my friends had gotten together at writer Robert Charles Wilson’s place to watch the two-hour-long opening episode, “Encounter at Farpoint.” After, we had much to talk about. Clearly, this iteration of Star Trek was a work in progress – in fact, many of the first season episodes were awkward.  Yet here was science fiction television about ideas again, with strong, versatile characters and a vision of the future that had recaptured an unconventional space. I loved it!

Now that’s all over with, too. I never grew particularly fond of Voyager, for reasons I’m not entirely able to explain. Enterprise was worse still – the least Trekkish of all Treks. We have been given three new movies in the Abramsverse, which stand up reasonably well to some other space opera franchise, but shat all over everything that came before, essentially saying that none of it happened, and now a new bunch of directors are going to tell us the right way to do Trek, without any ideas that might distract viewers with serious thought. Like Star Wars, in other words. Exciting, yes. Occasionally amusing. But I haven’t much interest in them.

I haven’t yet seen the new offering, Star Trek: Discovery, of course, but take note of the fact that it takes place in the “past,” rather than the “present” established by the last of the Next Generation movies…much less in Star Trek’s future. That’s two Treks in a row that were set in the “past.” I interpret this trend as a malaise of society in general, which no longer views the future with optimism. Moreover, the series will show on Netflix…yet another service I no intention of installing and paying for monthly if I want to see this current iteration of Trek. I’m not willing to buy into a future of a near-infinite number of pay-for-use services and apps, in which you possess nothing yourself – not even the cyberspace in which you store your personal files. I’m sure Spock would have said, “That is not logical,” and Data would have said, “Would it not be greatly to your disadvantage to continue paying for a thing over and over?”

Never mind.  I bought TOS and TNG on DVD, and can watch them for the next 50 years without tiring of them. I want to buy DS9, too, and if Discovery is any good, then I may buy that on DVD as well.  After all, it’s the future that’s coming, and anything might happen there.  I might even learn to love Star Trek for a third time!