Home Fantasy Review: Too Like the Lightning by Ada Palmer

Written in a flowing style akin to works found in classic theater, the debut novel Too Like the Lightning by Ada Palmer hits the store shelves today from Tor Books. It is a fresh take on traditional literature, blending old and new philosophies on how society will be carved in the distant future. 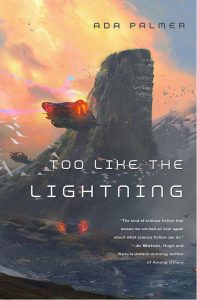 Just like the old adage that one should be careful what you hope for, this story takes the reader to a place that is filled with good and evil. The year is 2454 and technology has given society a deceptive advantage that humanity has grown too dependent on. Though this type of future may have the appearance of a utopian attitude from the character’s perspective, readers will recognize the dystopian side of the culture. From a philosophical observation, this unique view of diverse political ideologies in conflict with religious theories makes Too Like the Lightning a refreshing change from the typical dark future found in modern literary works.

Mycroft Canner is a convicted criminal whose punishment is to wander the land and serve all those who he meets in his nomadic journey. As the story’s narrator, it’s easy to doubt his intentions from the very beginning, and no matter how much the reader might feel at ease, the character’s history inevitably gives way to questions of loyalty. The foil to Mycroft would be a sensayer named Carlyle Foster, whose spiritual counseling must be handled delicately in this society where public practice of religion has been banned.

The third wheel, but arguably the most influential character in this trio is the aptly named Bridger, a remarkable little boy with abilities to bring life to inanimate objects. This power (or curse) bridges the cloudy gap between fantasy and science fiction with a metaphysical examination of religion and reality.

Palmer has built a vast world where readers will be immediately drawn in and absorbed by the detailed imagery. This type of stage makes the characters comfortable in their roles and inevitably more believable, but it also opens the door for additional stories down the road.

However, the credibility of the story is weakened a bit by the author’s first person approach. It’s daring enough to have a narrator with a scrupulous past, but confessions of being an unreliable narrator do not make it easier for the reader. The classic instruction to “show instead of tell” holds true in this case as the trustworthiness of the speaker can be a distraction.

This distraction becomes most evident near the end of the book when Mycroft drops the bomb, “I freely confess, reader, that this chapter is half imagination, for I was still a prisoner at Madame’s.” This revelation does point out that the uncertainty is limited to the single chapter in question, but the character/narrator is now putting serious doubt in the believability of ALL previous chapters with this late disclosure.

Though the publisher touts Too Like the Lightning as the beginning of a series, it may also be shorter than expected. The confusion arises when the narrator states that the journey will continue, but he locks in on the overall scale of the series with, “This History has two halves, reader strange as it is that seven days should take two books to tell.” The story of Mycroft may indeed span only two books, but Palmer has built such a diverse world, many of the other characters can assuredly (and hopefully) emerge in future editions.

In all, using a classic style of prose along with a speaker ignoring the fourth wall and addressing the audience directly is still a refreshing way to experience a story. The combination does seem to fit the social and philosophical arguments of the book and makes them more palatable. Though Too Like the Lightning by Ada Palmer relies on an antiquated presentation that gives the story more of a theatrical feel, there are some challenges that come with believability and hopefully these occurrences will be addressed in the second book.