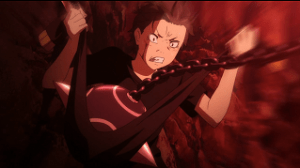 Re: ZERO -Starting Life In Another World- #6 – After a particularly unpleasant death, Subaru resolves that he is going to devote all his resources to figuring out whodunit and why this time through. Furthermore, he’s going to remove himself from the scene of the crime so that he can observe the event from a safe distance. Of course none of this works out as planned.

So it’s Rem with a giant spiky ball and chain, and what’s more, she seems to be specifically targeting Subaru. Makes you wonder what exactly Roswaal put in his pack. Magical tracking beacon, anyone?

If Subaru’s the target, someone has to know far more about him that they’re letting on. If there’s a powerful magic-user involved, perhaps they can detect something about his special ability. Perhaps he’s being targeted because whoever wanted Emilia’s candidate token still wants to get at her, but has figured out that Subaru’s ability is protecting her. (I think Puck’s comment a few episodes ago about fulfilling additional terms of his contract if Emilia is killed may be a clue to where the ability came from.)

Whenever Subaru makes it past this assassination, there’s then the mess with a potentially freed dragon to deal with. The way the legend is told in this episode, it sounds like someone might have removed the royal family in order to end the agreement with the dragon. I wonder if Felt might turn out to be a member of the family, and her recognition as a royal might be key to stopping whatever’s afoot? 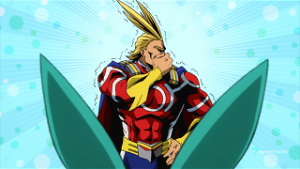 My Hero Academia #6 – All Might really is the Hagrid of U. A. Academy, seeing as he gets to teach the class most likely to get students seriously injured while simultaneously being the most fun. It’s costumed combat time!

Actually, with that cape, those colors, and that power, it’s pretty clear now that All Might owes a lot to Superman. And Izuku is acquiring the Superman story piece by piece– first the power, and now a costume made by his mom. Katsuki is pretty much Rambo, and Ochako… well, it’s nice to have a nod to the fact that skintight outfits are embarassing, but the fact remains that the female lead is stuck with a skintight outfit. I look forward to the moment when she develops the courage to actually ask for whatever she really wanted and gets something better. Please say that happens sometime.

Katsuki is a long way from being a true villain, but he’s developing nicely as an antagonist as he realizes something is fishy about Izuku suddenly developing a powerful Quirk. I still think the two of them are eventually going to be teaming up against a proper Big Bad, but many episodes of manly bonding through rivalry and combat lie between here and there. 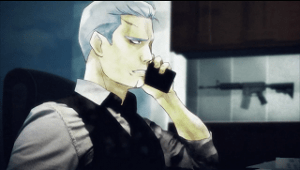 Kagewani -II- #6 – Hey, look, a basilisk! Wait, I mean, don’t look, a basilisk! What’s a basilisk doing in Japan, anyway? Given that it turned up in an urban area, it’s probably part of the kagewani-contaminated menagerie that escaped from Sarugaku’s basement last season. Or it could be that some other group at Sarugaku was engaging in mad science with roosters and toads. Frankly it would not surprise me at this point.

Back at Sarugaku, Dr. Homma turns out to be not just the sort of person who thinks setting velociraptors loose on his coworkers is a good idea, but the sort who, in general, is not terribly bothered by casualties as long as he gets the result he’s after. Also the sort of person who thinks that high-powered assault rifles are a tasteful accent for modern office decor. (The spelling of his name turns out to be 本間, and if you want to read anything into that, go and plug it into the World Wide Web Japanese Dictionary. I’ll just wait here.)

So he’s definitely our villain for the season. I’m still not sure who the protagonist really is. Bamba’s out of action for a while, the detective guy hasn’t been seen since episode 2, I don’t think the monster-hunting lady is going to have a sudden change of heart, so maybe the guy at the mall? Or maybe this season is about how it slowly dawns on Kimura that collecting and breeding monsters is not as great an idea as it may have first appeared. 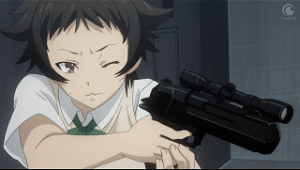 The Lost Village #6 – Yes, the monsters in the woods (or some property of the woods themselves) provide an individualized experience for all their victims, taking the form of everyone’s personal fear or embarassment. Masaki and Mitsumune are causing the menace some trouble, though, running together, leaving it torn between forms that are relevant to each of them. One of them is afraid of a specific person, but the other is even more afraid of giant penguins. That’s going to be an interesting flashback.

Back in the village, more people are turning paranoid about the fact that a girl named Masaki once vanished near there. Ludicrous theories are spun, as everyone forgets that most people on the tour are using pseudonyms, and that Masaki is a perfectly normal name shared by probably tens of thousands of people in Japan.

If there turns out to be any kind of connection, I’d guess that our Masaki knew something about Masaki Aida and chose to use her name on the tour for that reason. 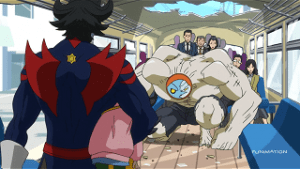 Concrete Revolutio #18 – Concrete Revolutio is pulling all the plotlines and themes together quickly now. Daitetsu is learning to use his new giant robot, built by Jaguar, just as the queen of the Tartaros Bugmen awakens and Earth Girl has just been rescued from Ikuta Labs.

The invasive weed is one of the many foreign influences that were flooding into Japan in the late 1960s and early 1970s, causing changes that piled up too quickly for the comfort of many people, but also far too quickly to be controlled. There’s another nod to the power of rock ‘n’ roll with the name of the just-released criminal, Jack Flash.

And then there’s the unassuming salaryman who decides he wants to keep being The Hulk because it makes his daughter happy. Again and again this show has returned to the theme of kids and superheroes. Jirō now frames his acquaintance with Kikko as “someone used to believe in me, but then she grew up”. (Ah, but she didn’t lose faith in him, did she, she just developed an inconvenient attraction to him. Come to think of it, all that might be applicable to Emi, too.) The return of the Bugmen’s queen reminds of Fūrōta’s discovery of what he really did when they attacked the Diet building and his grappling with the fact that he can’t grow up.

The overall question the series is asking is, can there be room for true superheroes in the messy, complicated adult world? And its answer is yes, but it’ll still be messy and complicated.