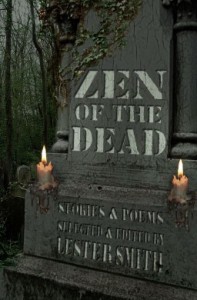 Every year, since 2010, during the month of October, with a release slated for on or shortly after Halloween, Lester Smith of Popcorn Press runs a Kickstarter campaign, which is more like a pre-order fest than a real campaign, for a new anthology of poetry and short fiction with a horror theme. This year’s Zen of the Dead includes more fiction than previous years (23 flash and short stories vs. 89 poems). I’m sure the fiction is fun, but I’ll focus on the poetry here.

In previous year’s anthologies, the poetry tended toward the very short dwarf sized poems of haiku and other short short forms, which is really no surprise with titles like Cthulhu Haiku or Halloween Haiku. There are in this one, however, a few meaty mid-length and longer poems, which give the anthology a nice balance. I, personally, get more out of poetry, which straddles the cut-off from the short form category to the long form – around 50 lines – not too short, but also not too long, and this anthology has a good number of them. All in all, I really like this year’s mix of length and form with fiction. There’s also not much which I would call Hardcore Horror, but rather, much of it is tongue-in-cheek or downright humorous light verse. Therefore, it makes for a cold and dreary eveni
ng’s pleasant entertainment.

I am a member of the Science Fiction Poetry Association and its membership chairperson, so it’s a delight to see so much poetry by many SFPA members in these anthologies. This volume includes work by F.J. Bergmann, Robert Borski, Josh Brown, James Dorr, Joshua Gage, Adele Gardner, Deborah P. Kolodji, David C. Kopaska-Merkel, Christina Sng, David Lee Summers, Greer Woodard, and Stephanie M. Wytowich. I especially enjoyed Deborah P. Kolodji’s work – for instance: in the fog / of all this gray… / blood moon. F.J. Bergmann’s “Eyes”, which many may remember from her Elgin Award winning collection Out of the Black Forest is especially evocative and “On Abundance” an acrostic poem in which she lures you in with nostalgia and then the creepiness accosts you in the last stanza with stunning imagery:

in a warm and tangible darkness

It was also wonderful to read work by other, non-SFPA poets. I found the poetry of Michael Kriesel, Greg Schwartz (2015 Dwarf Star winner), and Kelda Crich especially fresh and interesting.

Coughing up words like pins on that brittle August lawn,

Dye the dark sky in colors.

They are storm, coming.

Jennifer Moore does a very good job of emulating the verse of several centuries ago, which adds to the gothic feel:

In human guise the devil rode

With furious force and speed

And thund’rous tread, to shake the dead

Upon his fiendish steed.

I have always enjoyed these anthologies since I discovered them a few years ago. Since they are published around Halloween, they make excellent atmospheric reading for the season. But since they don’t generally evoke Halloween overtly, you can really read them at any time of year for a good shiver.

And for anyone who likes what Lester Smith is producing over at Popcorn Press, you can also support him in his own poetic endeavors (a novel in sonnets – “The Pastime Machine”) through Patreon: https://www.patreon.com/LesterSmith?ty=h

My next review will hopefully be of Ann K. Schwader’s new collection of cosmic dark verse!