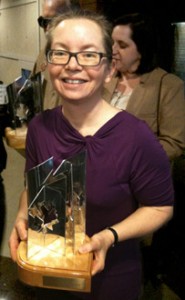 Canadian poet Carolyn Clink’s chapbook Much Slower Than Light is the focus of this week’s SF poetry review.

Carolyn Clink is an accomplished poet who now lives in Mississauga (just west of Toronto) with her husband, science-fiction writer Robert J. Sawyer. She has many publishing credits to her name including poems in Analog, Weird Tales, Chiaroscuro, Tales of the Unanticipated, Space and Time, Star*Line, and Gaslight, and in the Canadian SF magazines TransVersions and On Spec. Her poetry has also appeared in many mainstream poetry venues. She is a sought after guest of honor at SF cons and has served as judge for contests and editor of several anthologies. She has published 3 collections of poetry. She has also discovered the time-sink that is beading. You can view some of her beading work here.

Much Slower Than Light, from Who’s that Coeur? Press is currently in its 7th edition (2014) and is probably quite different than the 2008 6th edition (I don’t have a copy from which to compare); there are 6 poems, as far as I can tell, which have been added since then and the 6th edition apparently had poems dating back to 1984. This is a retrospective collection; representing the best Carolyn Clink has offered us from 1996 through 2014 and is likely to morph again in a few years when Clink has more wonderful poems to call her best. There is an astonishing variety in form and subject and genre. There are only 22 poems in all, but all of them are gems.

Let’s see, half of these poems have been reprinted in a journal or anthology, some multiple times . First publications were in a variety of well-known genre magazines including Star*Line, Space and Time Magazine, On Spec, Weird Tales, and Gusts: Contempory Tanka. Two were finalists for the Aurora Award (Canada’s best Science Fiction and Fantasy) for best song or poem (“Stars” and “Zombie Bees of Winnipeg”) and one other was the winning poem in 2011 (“The ABC’s of the End of the World”).

“The ABC’s…” is just what it says it is, many of the words Clink uses to describe the end of the world begin or show prominently a letter of the alphabet starting with A, then moving to B, etc. Listen:

Audio “The ABC’s of the End of the World”

There are list poems (“10 Things to know about staplers” – Star*Line 34.1), Tanka, Haiku, Dwarf length and long(-ish) poems, free verse and rhyming verse, straight up SF, Horror, serious and funny/spoof poems and much in between.

Canada looms prominently in many of her poems. Some obviously by the title (“Zombie Bees of Winnipeg” and “Toronto Necropolis”) and others evoking the wide spaces of Canada (“Very Large Array”) or certain landmarks set the stage (“Holes” and “Cenotaphs”). In the case of “Cenotaphs” we are taken on a tour of the country. Listen:

Some poems are just fun, tapping into the collective cultural experience (of the Western World). Listen:

Audio “If Stephen King Wrote for the Soaps”

Clink’s style is very readable and highly enjoyable. All are easily understood and there’s nothing mysterious about most of them, but the depth in many sneak up on you. It’s difficult to get a handle on what makes these so special. It’s not so much the words themselves or the poetic lines, but the whole of the poem, which combines to light up your brain when the poem is over. Such that I was compelled to read each poem again immediately to try to fathom what had just happened.

to when stars exploded

This is a fine example of what I mean.

As far as I can tell, you can’t get this sparkly little gem of a chapbook anywhere but from the poet herself. She is very happy to send it anywhere though, evidenced by her willingness to send it to me in Paris, just email her: