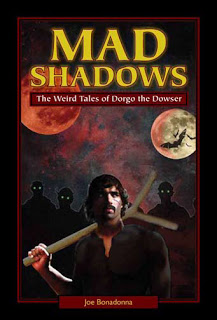 When I first came across this book, the title made me think it might be something along the lines of Manly Wade Wellman’s John the Balladeer stories, more commonly known as the Silver John stories. It was the word “dowser” in the title.  That’s not actually the case, but I can sort of see the resemblance.

Rather these stories are sword and sorcery. Dorgo is a retired mercenary in a city known for its underworld and criminal element. At some point before the book opens, he was given a dowsing rod by a shaman. In the first few stories, he uses the rod to assist the city watch in several investigations. Later, the action moves to other locations, and the adventures become more varied. Also more traditional sword and sorcery in some of their elements.

Bonadonna has created an interesting world, one I’d like to see more of. It’s populated by satyrs, centaurs, minotaurs, and other nonhuman species, primarily from Greek mythology, along with the more traditional monsters such as vampires and werewolves. Elves are purely mythical, though. For the most past, the different races live together in peace. In one of the stories, “The Secret of Andaro’s Daughter”, Dorgo sets out to avenge the murder of one of his friends, who happens to be a Cyclops.

There’s quite a variety here. From the living shadows that drink blood of the title story, to treasure hunting (“In the Vale of the Black Diamond”) or werewolf hunting (“Blood on the Moon”), to trying to discover why children are falling into coma-like states (“The Man Who Loved Puppets”), Bonadonna proves that he’s not a one trick pony. While the first few stories all involve some sort of supernatural crime, or at least a mundane crime motivated by supernatural elements, the later stories show a broad range of subject matter.

One of the things I found interesting was that, unlike say the Conan tales of Robert E. Howard, the Dorgo stories are sequential, with each story following from events in the previous story. Events from earlier stories have consequences which influence later stories, although usually not to a strong degree. There’s no overarching storyline that continues through all the tales, but rather they have the feel of events from a portion of a man’s life, a man who seems to have a great deal more adventures than most.

Dorgo is interesting character, and I like his voice. (Most of the stories are in first person.)  The supporting cast, while changing somewhat throughout the course of the book, are likeable people. Even if they aren’t all human. No, that’s not quite right.  Especially since they aren’t all human.  Dorgo’s interactions with the supporting cast have depth, which adds to the enjoyment of the stories. They move quickly, contain crisp dialogue with a good deal of wit, and are never boring. Things get pretty dark in these stories at times, and the humor helps even things out. Bonadonna balances the human and the grimness in such a way that one never becomes suffocating.  Instead, the humor and wit make the characters seem more real, as some of the characters, including Dorgo, use the humor to deal with the darkness they confront.  He also handles the fight scenes well.  Bonadonna coreographs the fights so that the reader knows exactly what’s happening, yet he never overdoes it on the details.  There’s certainly room for more of tales of Drogo, and I for one would welcome them.

The only thing I would like to see more of would be for Dorgo to rely further on his dowsing rod. He’s handy with a blade, and more than once uses his saber to good effect, but I felt there were times when the dowsing rod could have been employed to a greater extent. I never got a thorough understanding of its limits and abilities.

Still that’s a minor quibble. These are fun, enjoyable sword and sorcery tales. I recommend them and hope there will be more in the future.

I’d like to thank Steve Davidson for the review copy, which I presume he got from Mr. Bonadonna. If so, thanks are due to him as well.