Lee Martindale has been writing short stories for a number of years now. They’ve appeared in a variety of venues, some of which are rather hard to come by these days. Fortunately her entire output, minus a couple of collaborative efforts, has been collected in the present volume.

The stories herein range from humorous fantasy to Arthurian to space opera to some things that fall between the cracks of our convenient classification system. There are 29 stories in this volume, some of them quite short. Martindale provides a brief introduction to each one, along with its publication history. If I counted correctly, four are making their appearances for the first time here.

Rather than try to summarize all 29, I’m going to discuss my favorites and why they’re my favorites.

I think I liked the three space operas the best. The stories take place against a common background, although not at the same time. In “Lady Blaze”, a grieving mother enlists the crew of a pleasure ship (a brothel in space, in other words) to help her track down her young son, who has been kidnapped by a notorious space pirate. “Spinacre’s War” concerns some veterans who have been shabbily dismissed from the service because of their injuries and how they prove they aren’t to be counted out yet. “The Lady of Trade Town” first appeared in Martindale’s anthology The Ladies of Trade Town. When I reviewed that volume, I said this story almost made me cry. I didn’t have quite that strong a reaction this time, but then I knew the sucker punch that was coming at the end. 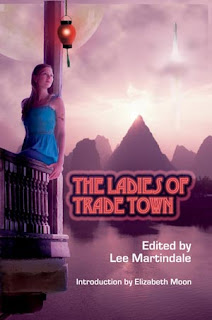 Many of Martindale’s stories, and these three in particular, have a gut-wrenching twist at the end. In some respects, these tales are very much in the tradition of William Sidney Porter, who wrote under the name O. Henry. You think you understand everything that’s going on, then right at the end the author hits you with something that adds a whole new depth to the characters.

And that brings up another aspect of Lee Martindale’s writing. She writes from the heart, probably more so than the majority of writers active in the field today. In most of her works, the characters are part of some sort of a community. And not just the characters who stay in one place. Even the ones who spend time on the road traveling are part of a greater community or have someplace to come home to. This is the single most consistent trait in these stories, the thing that’s present in a story about a bard, a spacer, or a contemporary woman.

Speaking of contemporary women, the humorous fantasies were my next favorites, in particular “Combat Shopping:”, “Nimue and the Mall Nymphs”, and “Sarah Bailey and the Texas Beauty Queen”. In the first story, a woman warrior has trouble finding the right armor. In the second, a trio of teenage girls learn that some rituals you find on the internet are best left alone. And in the last story, Martindale demonstrates just how scary her understanding of the real estate market in the North Dallas suburbs is.

Lee Martindale is a bard, so it’s to be expected that bards figure prominently in her work, both in her Arthurian stories and her other fantasies. I especially like the Copperwood Bard stories. She mentions that she’s got notes for a few more. I for one am going to hold her to that. And “To Stand as Witness at the End” is a retelling of Lancelot from a bard’s point of view that is harrowing.

Martindale has been active in the size acceptance movement, and for a while edited Rump Parliament, a publication that dealt with size issues. Several of her stories were first published there. The one of this group I really like is “Porter Piedmont’s Not-So-Wonderful Life.” As you can probably guess, it’s a riff on a certain movie that gets way too much air time at Christmas. I love Martindale’s take on it, almost as much as I hate the original source material.

My review copy, for which I would like to thank Ms. Martindale, was a print version. The production values are top notch. Melanie Fletcher provided a beautiful cover that perfectly captures the overall tone of the book. The binding was strong, and no pages fell out. I noticed one or two typos, but overall the copy editing was good. Much better than some New York published books I’ve read in the last couple of months.

I strongly recommend this one.