SPECIAL NOTE:  Check out the Concord Monitor’s coverage of what we’re doing here!  and, if you’ve not seen it before, here’s coverage from 2013.

Annalee Flower & Natalie Luhrs Nail It:  take off from Russ’ How To Suppress Women’s Writing (despite lame critique published before this piece was released)

BBC offers a “Timeline of SF Literature“.  Of course, what they are really writing about is “proto” science fiction because “Scientifiction” didn’t exist, as a thing, until March 1926 when Gernsback introduced “a new type of magazine” that offered the reader a ‘Wells, Verne, Poe’ type of story and then went on to defined what that was for the first time in human history.  (I mean, I love Aldiss’s work, but that Billion-then-Trillion year spree thing really screwed up a lot of people’s academic understanding of the genre.)

Bye bye slave Leia costume – Disney “cleaning up” the Star Wars universe.  (“George!  Put those damned toys away before someone sees them!”)

This is just a really, really cool gif

Oh Noes!  Add One More!  Another comic book hero has been changed to support diversity.  Surely the world is ending tomorrow!

Crossed Genres is No More

Are Mass Extinctions Cyclical?  (and if so, where are we on the cycle?)

Princess Leia and that outfit: Disney can do what it wants to do with its property. That’s not in dispute.  They don’t have the right to re-write history. So, in the interest of providing future generations of fans of the Star Wars saga an opportunity to see what all the fuss was about (and to see Carrie Fischer in costume presuming that such has been expunged from the film record), we offer this gallery: 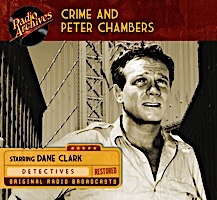 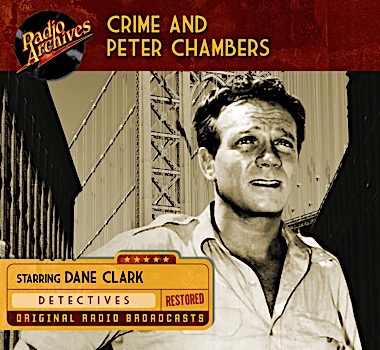 Rocky Fortune starring Frank Sinatra was one of the star mystery and adventure shows for NBC. The abrupt departure of Frank Sinatra during the Spring of 1954 left a big hole in NBC’s Tuesday night mystery lineup. Mystery novelist Henry Kane approached NBC to pitch his Peter Chambers character from his detective novels as a candidate. He wisely enlisted the popular Film tough guy, Dane Clark to pitch the idea to NBC.
This worked out well for all parties. NBC got a name Film actor for their Tuesday night mystery lineup to follow Dragnet, and Henry Kane got full control over the production, credits as creator, writer and producer, and was able to promote his Peter Chambers character. The show debuted Tuesday, April 6, 1954.
A New York based private detective, Peter Chambers was a detective that actively participated with and supported the detectives of the NYPD, much in the mold of Philip Marlowe. Peter Chambers apparently lived quite comfortably in the upper east side of Manhattan. Detective Lieutenant Louie Parker played by William Zuckert had not only a respectful professional relationship with Peter Chambers but the two had apparently become friends of some seventeen years.
There’d been little time to interest potential sponsors in the project but NBC, as was its practice throughout the period, heavily employed Crime and Peter Chambers to promote other programs in NBC’s lineup throughout the Spring and Summer of 1954. With only three professionals on the production side, Director Fred Weihe, Announcer Fred Collins, and Creator, Writer and Producer Henry Kane, the production remained fairly tight and lean throughout the run. Crime and Peter Chambers also supported Dane Clark with New York’s finest voice talent including Elaine Rost, Everett Sloane, Leon Janney, Patricia Wheel, Roger De Koven, William Griffis, Donald Buka, Joe de Santis, Bryna Raeburn, Ralph Bell, Guy Repp, Lawson Zerbe, and Nelson Olmsted among many others. As with many of the late 1940s through 1950s productions featuring a major Film star headliner, the network spared little expense obtaining the finest supporting talent they could acquire to support their star.
The series’ positioning in the Tuesday night lineup immediately following the wildly successful Dragnet with Jack Webb also helped to buoy the success of Crime and Peter Chambersthroughout the Summer of 1954. For Dane Clark’s part he was both believable and engaging as Peter Chambers.
NBC announced its acquisition of the popular The Lux Radio Theatre from CBS. On September 14th, The Lux Radio Theatre took Crime and Peter Chambers‘ timeslot over most NBC affiliate stations, though some regions of the U.S. continued to air Crime and Peter Chambers through to its twenty-sixth episode. Ten hours, twenty shows restored to sparkling audio quality by Radio Archives.
10 hours – $14.99 Download / $29.98 Audio CDs 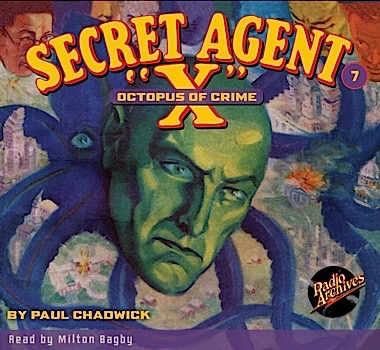 His true face unknown, his identity forever buried in a secret government file, Secret Agent “X” came back from the dead to take on the sinister sadists and evil extortionists who prey on innocent Americans. A master of disguise who carries a non-lethal gas gun, “X” the unknown is backed by a cabal of wealthy citizens and is answerable only to the shadowy K-9 in Washington.
Tentacles of terror reached over the country, spreading like a hideous blight through the cities of America. The Underworld, welded together under the secret symbol of a monster of crime, was organized as never before. And Secret Agent “X,” master man-hunter, went up against a genius of crime who stooped even to the ghastly horrors of medieval torture.
The enigma of enigmas, Secret Agent “X” has been deputized by a high government official to battle the darkest, most diabolical enemies of America before they sink their poisonous fangs into the nation’s healthy core. Faceless and unsung, “X” infiltrates these threats in a bewildering array of disguises.
Writer Paul Chadwick communicated the essence of the series with the horrific titles of his novels. Chadwick specialized in telling melodramatic mystery yarns saturated in an atmosphere of impending doom. The pulp editors called these menace stories. Eventually, these thrillers evolved into sub-genre known as weird menace. In Secret Agent “X”, a cloud of diabolical danger hangs over the heads of every innocent character until “X”, using his fists, his gas gun, or his loyal operatives, shatters the threat for all time.
No one knew who Secret Agent “X” really was. Not his readers. Not his editors. Not even his writer, conceivably. To this day in the 21st Century, his true identity is still a deep mystery. That’s keeping a secret!
Follow the Man of a Thousand Faces as he confronts the menace of Octopus of Crime, ripped from the pages of Secret Agent “X” magazine, September 1934 and read with chilling intensity by Milton Bagby.
5 hours – $9.99 Download / $19.98 Audio CDs 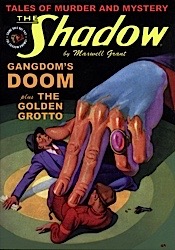 The Shadow, Volume 101
Who knows what evil lurks in the hearts of men? The Shadow knows! The Master of Darkness crushes crime in two early pulp novels by Walter B. Gibson. First, after one of his key agents is murdered by mobsters, The Shadow journeys to Chicago to avenge the death through “Gangdom’s Doom.” Then, piracy on the high seas lures the Dark Avenger into a deadly confrontation with the murderous mastermind of “The Golden Grotto.” This instant collector’s item showcases the classic color pulp covers by Jerome and George Rozen and the original interior illustrations by George Wert and Tom Lovell, with original commentary by popular culture historian Will Murray. Double Novel Reprint $15.95 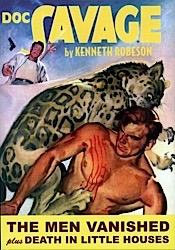 Doc Savage, Volume 84
The pulps’ mightiest superman returns in two action-packed thrillers by Lester Dent and William G. Bogart writing as “Kenneth Robeson.” First, Doc and Patricia Savage mount a rescue expedition to the Amazon jungle in “The Men Vanished” after seven of the world’s greatest explorers mysteriously disappear! Then in “Death in Little Houses” Doc seeks to learn why bearded mountain men are stealing portions of postwar model homes and a lady trucker has been marked for death. This instant collector’s item reprints the classic color pulp covers by Emery Clarke and Charles J. Ravel and also features the original interior illustrations by Paul Orban and historical commentary by Will Murray, author of sixteen Doc Savage novels.. Double Novel Reprint $14.95 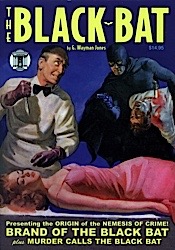 The Black Bat, Volume 1
Sanctum Books presents the 1939 novels that introduced the caped crimebuster whose adventures paralleled Batman’s and inspired Two-Face’s origin, written by Norman A. Daniels as “G. Wayman Jones” for future Batman editors Mort Weisinger and Jack Schiff. First, doomed to darkness by a murderous acid attack, D.A. Tony Quinn makes darkness his weapon with“The Brand of the Black Bat.” Then, “Murder Calls the Black Bat” into a deadly war against corruption as Tony Quinn battles to prevent the biggest jewel heist of the century! Golden Age of Comics Bonus: the debut of The Mask from Nedor’s Exciting Comics #1. This instant collector’s item showcases the classic color pulp covers by Rudolph Belarski and Emery Clarke and the original interior illustrations by Harry Parkhurst, with historical commentary by Will Murray relating how a lawsuit with DC Comics was narrowly averted. Double Novel Reprint $14.95 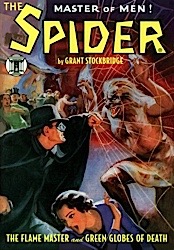 The Spider, Volume 7
Published by Sanctum Books
The pulp’s most murderous crimebuster wages his deadly war on crime in two violent 1935 thrillers by Norvell Page. Recovering from life-threatening injuries, Richard Wentworth confronts the lightning-wielding Lion Man from Mars to end mass slaughter and save his beloved city from “The Flame Master.” Then, with Nita held hostage and Commissioner Kirkpatrick enslaved by a criminal mastermind, The Spider wages his lone war against the acid-spraying “Overlord of the Damned.” This double novel pulp reprint showcases the original color covers by John Newton Howitt, John Fleming Gould’s classic interior illustrations and historical commentary by Will Murray. Double Novel Reprint $14.95 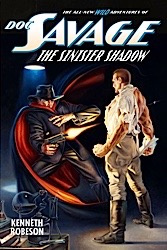 Doc Savage: The Sinister Shadow
by Will Murray and Lester Dent, writing as Kenneth Robeson, cover illustration by Joe DeVito
When millionaire Lamont Cranston and attorney Ham Brooks are kidnapped by gunmen driving a black hearse, it spells trouble for Doc Savage. Trouble with compound interest when Cranston’s personal lawyer is mysteriously murdered before he can consult with celebrated criminologist George Clarendon—who is secretly The Shadow!
These strange events put the Man of Bronze and the Dark Avenger on a collision course that threatens to expose the deepest secrets of both supermen. The conflict intensifies when underworld figure Cliff Marsland is captured and shipped off to Doc’s secret Crime College!
Will these legendary crimefighters join forces—or will the diabolical Funeral Director have the last laugh on Doc Savage and The Shadow? Softcover $24.95

Check out all the items in the Bargain Basement.
Hundreds of cassettes of The Great Gildersleeve and Suspense radio shows.
Girasol Replicas that have been read once and are in excellent shape at an unbelievable price.
12″ LP Vinyl Records. The last 35 OTR LPs are all priced at $2 per LP in groups of 5. The lowest price we will be selling them.
###

Steven H Silver performs this sad task annually (also used at Worldcon). Please take a moment to remember those we have lost, and the ones who have lost them.

We experienced technical difficulties with the time machine yesterday; it kept on taking us back to exactly 3 seconds before we were planning on traveling back to gather up the week’s posts – an endless, deja vu laden loop that would have made A. Bertram Chandler proud.  Since using the time machine to go back […]

Meet Hippocamp, “The Moon That Shouldn’t Be There”