This is not just another dragon tale. Dragon Heart by Cecelia Holland is a heartwarming story of adventure, tragedy, and inevitably discovery. But when it comes to determining the book’s true target audience, it starts to get a little clouded and difficult to describe. 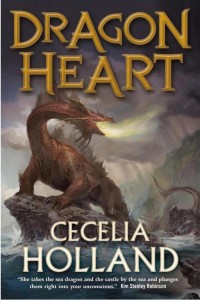 Dragon Heart comes from Tor Books and was recently released for public consumption on September 1, 2015. Noted author of historical fiction, Cecelia Holland brings her astute eye for detail and her fine touch of realism to this novel. With success from numerous novels including The Angel and the Sword and The Kings in Winter, she obviously knows her way around creating fantasy worlds and her longtime fans will quickly recognize her delicate hand in colorful imagery.

But what is this story? Really. Okay, it’s not historical fiction, no matter how much we may want it to be simply because it has dragons – because dragons are cool. The fantasy element will appeal to the YA audience while the darker political intrigue should appeal to the older readers. It’s not quite Game of Thrones worthy, but there are some noticeable scenes and allusions probably more suited for the mature audience. And yet, the story also has the charm of a classic fairy tale we might read to the younglings.

The story revolves around the royal family of Castle Ocean. After the king is killed by a neighboring empire, the widowed Queen Marioza is forced to marry one of the ruling Emperor’s brothers. The queen does her best to delay the nuptials – she killed the first candidate. Stalling before the second planned marriage, she demands that all of her children must be present for her wedding to the next available brother.

The queen has five children, the youngest a mute daughter named Tirza who has been kept away from the public ridicule in seclusion. While being escorted on the way back home by her brother Jeon, their ship is attacked and sank by a giant red dragon. Tirza survives, but is held imprisoned by the monstrous beast. In captivity, Tirza discovers that she has the power to talk to the dragon and she understands when the dragon talks back to her. The ironic twist is that the lonely dragon threatens to eat her unless she tell him stories.

When Tirza eventually escapes the dragon and she is rescued by Jeon, the story takes a dramatic shift where the dragon becomes nonexistent for quite some time except for a few hints regarding mysterious destruction taking place in distant lands. Readers are suddenly drawn into the political manipulation and bloody actions between the differing kingdoms as they fight for control. More Shakespearean the George R. R. Martinesque, but brutal just the same.

Holland’s artistic prose and eye for details is evident from the beginning. Dragon Heart starts out with a lot of tension from the waring empire as we hear about the queen’s struggles to maintain order. And the delicate use of a handicapped heroine and her protective caring brother is one to surely win the hearts of many young readers. But as soon as Tirza is alone with the dragon, the story takes on the personification of a fairytale being told. The dialog becomes rigid and the readers get the sense that they are being told a tale instead of being allowed to experience it. There is a distinct separation drawn between character and reader in this portion of the story.

But once we return to the kingdom and are introduced to the myriad of nasty characters being played like chess pieces, we are back to a fantasy adventure filled with violence, mayhem and questions of loyalty that fantasy fans welcome. It’s as if the reader is torn between a children’s fable and an epic adventure. The story never truly identifies itself.

Dragon Heart is entertaining and well worth the time to read, it’s just a littler distracting at times considering how it is presented. However, there is one notable distraction that almost ruins the entire illusion for this reviewer. Near the end of one scene, we are left with this closing dialog:

Oto pulled him into a corner. “Shut up and listen. You are not going to Santomalo. Listen to me. Here’s where you will go, and this is what you will do.”

An unreliable narrator is tolerable when used properly, but to purposefully tease the reader is unacceptable. By doing this, it shows that the narrator knows a lot more than we are being shown and the reader feels left out. Why? Building drama? Isn’t that what we are supposed to deduce for ourselves? In cliff hanger television productions, this is expected, probably something mandatory sponsors write in the contracts. But not in a fantasy novel where we expect to be shown enough details so that we can figure it out, experience the discoveries for ourselves.

Yes, there are a few things wrong with Dragon Heart by Cecelia Holland, but there are a lot of things that are really interesting too. It’s like a bowl of delicious mixed nuts with a few inedible shells left in. The story takes the reader in many surprising directions and presents a lot of unexpected turns. It has the attitude of a children’s fairytale mixed with the sass of a YA fantasy and just enough adult content to attract the other age groups. It’s not perfect, but it is entertaining.

If you’re a fan of Chinese action movies and Milla Jovovich, this movie sounds like a good bet… but it’s not. Only for the Jovovich completist. And maybe not then.