Steve is a big F too!

John Scalzi wrote a piece the other day discussing his history with fandom and relating how he was always a “small f” fan of science fiction and fantasy and that it wasn’t until after he’d been to a couple of conventions that he understood what it was all about and became a “big F” fan.

I’ve met and talked with John on a number of occasions, corresponded with him numerous times and have been the beneficiary of his fannish largess several times (perhaps the biggest one affecting developments here at Amazing that I will hopefully be able to reveal within a month or so…) and I can state unequivocally that John is a Big eFfin Fan.

Some discussion on the post mentioned has me pretty miffed and today’s editorial was going to be on that subject, but I do not have the time to do the research necessary – research quoting folks from First Fandom and onwards about Fandom, the SF Ghetto, the well-established sub-culture of fandom, the differences between small f and big F fandom and the fact that you’ve got to go back to the beginning if you are going to discuss that subject in order to glean anything meaningful from it (including the fact that FANDOM has not ever been a marketing tool of big business and that the phrase SF Ghetto is not a phrase we need to eliminate from the lexicon for political correctness….) so instead, I’ll chart my own path from small f to big F fandom as a starting point.  I’ll return to the subject again once I’ve had a chance to line up my research ducks.

So.  Born in the late 50s, a boomer.  The adopted son of two Jewish Brooklynites who started out intent on teaching careers (courtesy of Brooklyn College’s program for Burrough residents) one to eventually acquire a Masters in Psychology and help pioneer gifted and talented teaching programs in the NJ school system, the other to acquire a Ph.D and become head of the human testing division at one of the largest drug concerns in the world.

The household was typically Jewish in that it prized and supported intellectual discourse, reading and learning for its own sake.

When I was perhaps 3, maybe 4, my mother began telling me bed time stories that involved a team of astronauts visiting the different planets of the solar system.  Why she chose that particular subject remains a mystery as she was not a reader of science fiction herself.  It was undoubtedly the spark. 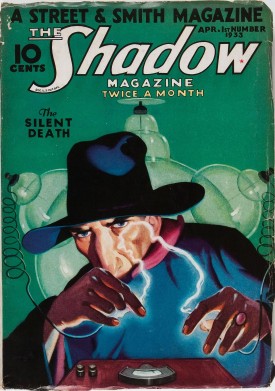 At about the same time, she also introduced me to radio plays.  We often listened to The Lone Ranger, Terry and the Pirates and our mutual favorite, The Shadow.  Anyone in that house could utter the phrase “who knows what evil lurks in the hearts of men?” and everyone else would respond “the Shadow knows…heh…heh….heh.”

Shortly thereafter, sometime in 1963, WKYW, Channel 3 in Philadelphia began airing a British television production – Fireball XL 5. (It would be paired a year later with another seminal Saturday morning event – Jonny Quest.  My Saturday mornings were set.)

I watched that show with religious fervor.  When I turned 6, I had a birthday cake shaped like the Fireball.  That same year (or perhaps the year after) I was gifted the Fireball XL 5 play set from Marx (and a year later the Cape Canaveral play set from Marx.  The two play sets got along famously).

The following year (approximately – we’re looking back over a new half-century divide here) I was granted special dispensation to stay up late so I could watch Voyage to the Bottom of the Sea.  (It aired at 7 pm local, I believe.  These days I’m going to bed at 7 pm…) (I was devoted to Irwin Allen’s other shows as well – Time Tunnel, Lost in Space, Land of the Giants.)

I’m pretty sure I read or had read to me L’Engle’s A Wrinkle in Time at about the same time.  Attending first grade gave me access to the Scholastic Book Service and I was quickly devouring The Runaway Robot, Revolt on Alpha C and most likely pretty much anything sfnal they offered, along with mysteries and westerns and anything else I could lay my hands on.

By the age of ten I was reading Lord of the RIngs, Wells, Verne, Shelley, Stoker and Heinlein. Heinlein led me to Le Guin, Chandler, Bradley and Campbell’s Astounding anthologies.  I was the typical nerd – having to be encouraged to “go outside and play” rather than staying in to read or watch.

That same year my parents (having previously recognized that they were dealing with a precocious monster) agreed to take me to see 2001: A Space Odyssey during its first theatrical run.  When finished, they confessed that they didn’t understand it and so I explained as best I could (having of course read the novelization that had been released in conjunction with the film) and gathered a crowd of other adults in the lobby, all of whom were also looking for explanation.  I believe that was the first lecture I delivered in public.

The following year I had to threaten to run away from home in order to be assured of being allowed to watch the Moon landing.

From the age of ten to 13 I amassed a huge collection of science fiction (there wasn’t much fantasy published beyond LOTR).  In between reading, I pretty much watched Star Trek whenever it was on.  Then the Trek conventions hit in New York and I was allowed to attend (by myself at the ripe old age of 13).

Up until this point, I suppose I was a small f fan, but the concept of being a “fan” never entered my mind.  I took quite a few hits from family, friends, teachers and the occasional socially stunted, immature adults (who bothers to castigate a kid for their reading choices?) over my obsession, but my conviction was complete and unassailable.

At that first Trek convention, I learned that I was a Trekkie.  I was overwhelmed:  hundreds of people all in the same place who loved that show just as much as I did.  Wow.

I went back the following year and discovered that my infatuation with Trek had waned.  There had to be something more than just Trek.  Isaac Asimov attended that convention as a special guest and I was fortunate enough to get to spend a fair amount of time with him.  It probably wasn’t Ike – more likely another fan also hanging out – but it was during that talk that I learned about Philcon, a long-running convention that was held just a short high-speed rail trip away from my home in Cherry Hill.

Plans were laid and I attended my first “real” convention.

Among the many things I was introduced to at that first traditional convention was First Fandom in the form of Robert A. Madle.  Bob introduced me to magazine collecting (I would eventually purchase my Amazing Stories Volume 1, Number 1 from him) and the entire history of fandom, from his early days in Philly, to the first get together when Pohl and Wollheim and several others traveled to Philadelphia.

I learned many other things at that first con:  I learned not to say “Sci Fi”.  I learned that the Trek conventions were not real conventions since they had far too much associated commercialism and focused on – gasp – a television show.  The real stuff, the important stuff, could only be found in two places:  in the literature and in Fandom.

Sometime during that convention I realized that, as many others have said before me, I had found my people.

The following year I went back to Philcon and volunteered as a gopher.  It was at that very moment that I became a Big F fan;  I was no longer simply taking what the community had to offer, I was giving back.

Here I am at a Balticon in 1979.  I’m pretty sure that was the year that I was head of security for the con.  A few years before, I had worked in all manner of capacities, including Hugo Awards Banquet manager, at the 35th World Science Fiction convention, about which David Kyle (First Fandom) had this to say:

SunCon had its share of new ideas, diligently searching for new ways to serve fandom (like an 800 phone number). It reinstituted the Hugo Awards Banquet. Perhaps the best progress reports published by any con to date were the series of four in large size under the identification of “Convention Journal.” Also a serious attempt was made, and in good measure successful, to unite fandom into a national body under the name of the World Science Fiction Society, with incorporation again being seriously considered. For a dedicated con fan, the Journals are worth reading (consider the definition of the amateur fanzine eligible for a Hugo and the articles on “filksinging” and “potlatch”). For the knowledgeable science fictionfan, the Program Book is a masterpiece, with a wraparound Vincent DiFate cover featuring a wonderful portrait of Jack Williamson. There were in-depth articles about, for, and by Jack Williamson — and equally full and interesting material about, for, and by Bob Madle, Fan Guest of Honor. Even Bob Silverberg, the Toastmaster, was extensively covered. We who attended had the pleasure of spending a weekend with them. With all the whirlwind of activity, no wonder that weekend also produced a genuine, tropical, near-miss hurricane. What an appropriate conclusion to the controversial SunCon! (Fancyclopedia) 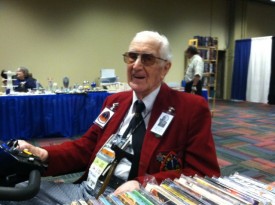 David doesn’t mention my involvement directly, nevertheless, I take these accolades from a member of First Fandom regarding the convention I helped bring into being as recognition that I was (and am) a member of the fold.

returns next week now that we’ve solved our technical issues