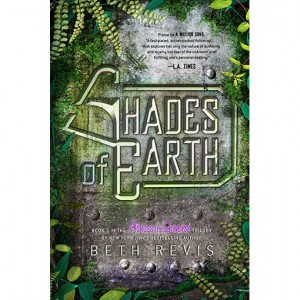 Well, here we are at the very last book in Beth Revis’ Across the Universe series. Specifically, we’re talking about Shades of Earth. The first two books were a thrill ride and a lot of fun, and this one…is a bit of a mixed bag. At this point I feel I ought to mention that you probably will want to have read the first two books, and as a result there’s going to be spoilers, so look out. Okay, everyone who wants out gone? Good, then let’s begin.

When we last left Amy and Elder they had discovered that the Godspeed has been orbiting Centauri Earth all along. Plans were made to land on the planet, but 2/5 of the crew decided to stay behind. After a bumpy landing the frozen crew is thawed, Amy is reunited with her parents and plans to set up a colony begin. But all is not well on Centauri-Earth, it seems that more time has passed than everyone originally assumed, and it seems another set of colonists were sent while Godspeed journeyed through space. Not only that, but there may be intelligent aliens on the planet as well. One thing’s for sure, Amy and Elder’s adventure is about to take some serious twists and turns.

Like I said, there’s a lot to love about this book, but it has it’s fair share of negative aspects as well. The first problem I had was with Centauri-Earth itself. All this time I’d been worried things on Godspeed might get dull, though they never did, but Centauri-Earth was the one that turned out to be boring. I was hoping we’d get to see some aliens, not necessarily sentient ones, but some would have been nice. The closest we get are some pteranodons, which are implied to be cloned, and a native flower that caused paralysis. Granted, the book does present a potential reason for why this might be, but it was still kind of jarring.

The next biggest issue I had were Amy’s parents. The whole time I listened to this book I kept wondering how they possibly got assigned to the mission, considering how oblivious they are. They have evidence that something has gone seriously wrong with the mission, but refuse to act on it. I couldn’t decide whether they’d gotten brain damage from the cryogenics, let the power go to their heads or we just naturally incompetent. The cryogenics theory is in doubt considering that none of the other frozen crew, or Amy for that matter, acted nearly as dumb. Quite frankly it’s astonishing they made it as long as they did without getting killed.

Okay, that’s enough about the negative, let’s talk about the positive. As always, the writing is excellent, and I enjoyed seeing Amy and Elder develop as characters. I also though the stone that stored sun energy were a nice touch. There were also plenty of really memorable moments, like when Orion was thawed out, or when Elder went to save the crew aboard Godspeed. The cover is nice, and as you may have noticed has become standard design for future prints of the series. Personally, I like the first two books with their original covers, but that’s just me. Also, yes, all the titles of the books are references to Beatles songs.

It’s not like this book doesn’t give us answers, but for every answer we receive we also get a new question. There are also a few questions still unanswered, like why nations in desperate need of financial resources would send a 300 year mission. If this wasn’t the last book of the series I’d probably feel different, but as it stands the series feel like it ended prematurely. Beth Revis has written some short stories set in the Across the Universe…um, universe, but I’m really hoping she writes a fourth novel at some point. There’s just way too many loose ends that need to be tied up.

All in all I can say that Shades of Earth is a mixed bag. It’s not terrible or poorly written, but as the conclusion to an excellent series it falls flat. Still, if you enjoy the Across the Universe series as much as I do you won’t want to miss out. See you next time.