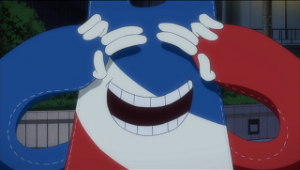 Gatchaman Crowds insight #7 – Nearly everyone is now giving each other the new salute and directly voting for more dictatorship, because if there’s one thing this show isn’t interested in, it’s subtlety. Things are moving along so well that even Rui, former Mr. Let’s Upend Everyone’s Lives With Technological Change And Tell Them To Just Deal, is now trying to persuade people that it’s too fast. Warnings are coming in from sources as diverse as Rizumu, JJ, and Berg-Katze that something even more unpleasant is in store.

Gelsadra has reached some kind of breaking point. The push for happiness has become so strong that any negative thoughts are being unhealthily supressed. Over the course of the episode, e looks more and more… gravid? (Remember, even though eir current form is male, e’s an alien. And if there’s another thing this show isn’t interested in, it’s the gender binary.)

The most baffling thing about what happened at the end there is that even Gelsadra emself doesn’t seem to know what happened. This is presumably the thing that Berg-Katze saw before and is terrified of, so you’d think Gelsadra would remember it. Maybe the danger is that e is cursed to be a perpetual fool, inadvertently bringing destruction through misdirected good intentions. 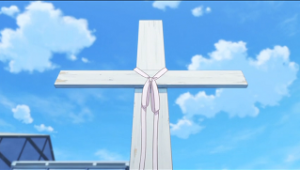 SCHOOL-LIVE! #6 – All right, so Megumi is dead and completely gone, and the apparent conversations people other than Yuki have had with her in the time Miki was there have just been due to really good guesses about what Yuki’s imaginary Megumi is saying. Miki is right that Yuki is nuts, but it’s good to hear the others saying what’s been obvious for a while– that the ideas that emerge from Yuki’s delusions are helping everyone out.

Closing out Miki’s arc, that leaves Yūri as the only one who hasn’t had a turn in the spotlight. There’s also the matter of their impending “graduation”. Yuki’s insanity is correct that they can’t stay holed up at the school forever. 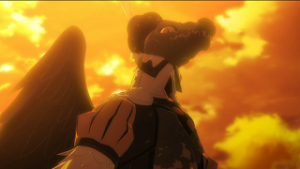 Rokka: Braves of the Six Flowers #7 – One day, in Adlet’s village, a sort of anthropomorphic crocodile/crow/dandy thing arrived and asked everyone politely to move into demon territory. And kill everyone who didn’t go along with it. Adlet was the only one who escaped, thanks to the sacrifices of his sister and best friend.

Adlet gets a good speech there about the problems with revenge. It makes the deaths more than just a lazy way of providing him with motivation.

Why was one of the ruling triumvirate walking around recruiting humans to move into demon territory, anyway? Slaves? A food source? Has the border between human and demon lands always been this porous, or does it become weaker as the time of the demon lord and the six heroes approaches?

It’s good to see Flamie also get a chance to tell her full story. Even though this episode was practically all talk, it’s been a satisfying one nonetheless. 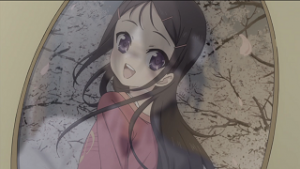 Charlotte #7 – Yū has survived the collapse with cosmetic wounds, and Ayumi is gone. Reflecting on how selfish he was toward his sister, Yū transforms from a jerk to a depressed, angry jerk who runs away to Cliché Town.

First it’s the hikikomori phase with the windows blocked and a steady diet of pointless TV and instant noodles. Then it’s the drifter phase where he acts out his anger by beating up and mutilating gangsters, which the plot shows no interest in ever confronting him with much in the way of consequences for, because, hey, gangsters, right? Finally there’s the almost-descent into drug use, at which point his manic pixie dream girl materializes and fixes everything by cooking him the perfect meal.

Argh. Charlotte, you’re better than this. Get back to the mysterious new girl and what the dowser was up to next time, okay?