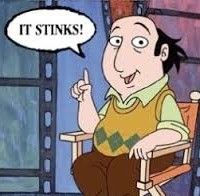 I try not to get angry or offended by something I read or heard on the Internet. Rarely, in my experience, does it help anything. Nevertheless, when I heard a favorite YouTuber of mine say “all critics are just bitter, failed artists” it understandably made me a little upset since I review books and other content on my blog (shameless plug incoming) Alternate History Weekly Update and here on Amazing Stories. So I guess you could call me a “critic” and I certainly don’t see myself as a bitter, failed artist. That being said, the statement made me ponder what exactly is a critic and is there any truth to the bitter, failed artist claim.

In my opinion, as biased as it is, a critic is just like any other fan you find nowadays. They may be a fan more of a genre or medium then any specific individual artist or group, but they’re a fan nonetheless. They are such fans that they don’t just consume works from their favorite genre or medium any chance they get, but they also strive to know every single trivial detail about it. A critic will usually share their passion for their subject, often without even being asked, but if they are asked “is X good” or “can you recommend a good X”, they will try to answer honestly. In the age of social media, it is very easy for everyone to be a critic and share their opinions on a particular piece of art, whether it be a painting, a book, a film, a game, etc.

Conflict occurs when your usual critic decides to go one step further and seek a wider audience for their criticism, either by creating their own outlet or working for some other entity that sponsors their reviews. There can be many reasons for this. Perhaps the critic wants to educate the audience of their particular genre/medium or they want to draw attention to an obscure piece of work that in their mind is good, but is ignored by mainstream audiences. And yes, they also could be bitter, failed artists. It is certainly possible I am not going to pretend that I always know the criteria for which every critic judges something. Thus, when a critic inevitably gives a bad review to something or someone, it is completely understandable for the artist or their devoted fans to feel the critic is being unfair and arbitrary in their judgement.

So I fully admit their are bad critics out there, but there are also many good critics as well. In my mind a good critic is someone who tries to be fair and balanced, does their research and, if they have to give a bad review, at the very least they try to think of someone who would like the work. The good critics also try their hand at creating something they usually review. Wait, does this mean its true that all critics are bitter, failed artists? Not exactly. A critic who “fails” to produce a successful work could learn an important lesson about humility in the process, especially when they are on the receiving ends of negative and unfair reviews. On the other hand, if the “critic” is successful with their work, but goes back to being a critic, are they still considered a failure?

Perhaps we need to jettison the stigma creatives and their audiences have for critics. Consider the people involved in such shows like Mystery Science Theater 3000, the Nostalgia Critic, the Angry Video Game Nerd, Cinema Sins, Honest Trailers and Zero Punctuation. All of these productions involve one or more people being highly critical of various works of art and sometimes they even take potshots at the creators themselves. Yet we follow these shows and characters just as much as we follow other creatives. Meanwhile, the time and effort put into these reviews can be even greater than what is put into the things they review. In some ways, criticism is a form of creative expression that should not be downplayed or dismissed.

So are critics just bitter, failed artists? Actually I don’t have a straight answer for that. Dealing with absolutes is rarely a recipe for success and there can be people who lash out at others due to their own disappointment. Nevertheless, I believe most critics are really just people who truly love what they review and want to make sure people see as much of the good and little of the bad as possible. As for the artists out there, I know first hand how much it can suck to read or listen to a bad review of your art. My advice is too appreciate the good reviews, take the constructive criticism where you can find it and ignore whatever left that is unfair or wrong. Perhaps a little more understanding can make things easier for everyone.

The passing of a Master RIP RICHARD MATHESON Richard Matheson passed away 8 days ago on the 23rd of June 2013. He was 87 years old. This is pretty much the end of an era when you consider that Matheson was one of the last living writers to have contributed to Weird Tales Magazine […]