Steampunk stories are most successful when the story evolves within the setting rather than relying on the old western elements familiar to the genre to drive the plot. When you find a good story filled with strong characters who readers can care about, the journey writes itself and the readers are more often than not left with a sense of satisfaction. 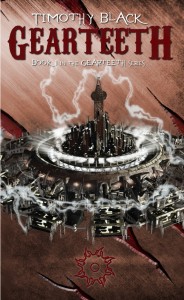 Back in October of 2014, Blysster Press released a different kind of novel titled Gearteeth by Timothy Black. Billed as the first in a new series, this uniquely dark steampunk story has many thought-provoking elements that loyal fans of the genre will embrace while introducing new twists on some of the old features often found in classic horror stories.

A disease sweeps across the United States in 1890 turning everyone infected into grizzly werewolves. Leaving the beasts to fight it out amongst themselves, the non-infected survivors took to the skies in massive flying cities designed by the brilliant inventor Tesla who had long since disappeared during the cataclysmic Blood Period. Now years later, these floating societies are under the protection of the mysterious storm prophets known as Tellurians who hold dark secrets almost as sinister as the monsters down on the ground.

Our hero is Elijah Aloysius Kelly, a brakeman on the Double T Thunder Train Heaven’s Grace, which is piloted by his blind yet determined grandmother Maude. These heavy, lightning conducting airships are the shuttles used for resupplying the floating cities like Wardenclyffe. But when another train crashes into their airborne community, Eli is suddenly forced into race against time to save humanity as well as himself.

Being of mixed race, Eli also gives the readers a fearful glimpse into the racial discrimination that doggedly refuses to escape us. Even in literary fiction where fantasy often placates life’s hardships for the interest of reader compassion, author Black successfully gives us real people with real problems in a surreal settings.

The gadgets familiar to Steampunk are often pointless trinkets of the setting with little to no meaning to the story. One such element is the dreaded goggles. It seems these misused eyepieces frequently take on the symbolic roll in Steampunk without any true importance behind their origin. But Gearteeth brings fresh significance to goggles as they are “treated engineer lenses” used for navigating the skies via telluric echoes. They also allow users to see electrical currents running through materials like steel, an important element in vessels that relying heavily on lightning. But the down side of extended use of these harsh inventions is inevitable blindness, and in worse cases, death. This clever element gives readers a comforting sense of believability other writers in the genre can learn from.

The name Gearteeth comes from the experimentation project implemented to transform the infected werewolves into bio-mechanical subordinates, but the story’s title has a much broader connotation on the overall theme of the book. The Free Dictionary describes gear-teeth as “a toothed machine part, such as a wheel or cylinder that meshes with another toothed part to transmit motion or to change speed or direction.” When you take a step back and look at the book inclusively, it also has many teeth that mesh together in a cohesive story, allowing the journey to flow with changing speed and excitement. Fitting.

Having written many reviews for works in Steampunk, it is refreshing to find something with a new take on old ideas while mixing in some innovative concepts that are sure to inspire others in the field. Gearteeth is the first of hopefully many installments that we will look forward to from Timothy Black.