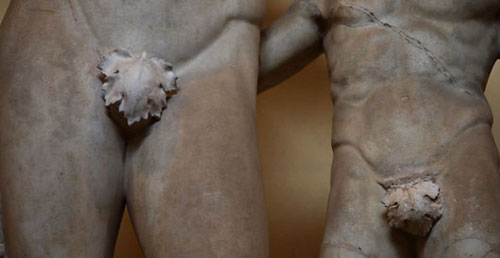 Today I will write a post with few pictures. Because the images I could choose to illustrate my post, would probably give offense to many of the readers of this magazine.

I thought I’d write a post about the depiction of nudity – in particular, full frontal male nudity. In contemporary Western culture, this remains one of the last taboos – short of images that are explicitly intended as male pornography.

Depictions of nude males have a long history in Western art. Generally, the ancient Greeks are credited with discovering the nude human body as a worthwhile subject for artistic depiction. In archaic and classic Greek art, the women generally keep their clothes on, while the men are naked. It is not until hellenistic times that this trend begins to inverse.

The Greeks had absolutely no qualms about depicting nude males with all their anatomically correct parts. In fact, they considered the male genitalia so important that even in sculptures that only depicted a male head on top of an oblong slab of stone, the phallus would also be carved at the appropriate height – a very common type of abbreviated statue known as herma, which often served as signpost on roads and borderlines.

Famously, the Athenian politician and general Alcibiades was accused of castrating a number of those statues after a drunken party, which was regarded as a major sacrilege. Alcibiades, who was absent on a military mission at the time of the trial, was condemned to death, had his property confiscated, and a large financial reward was promised to anyone who would succeed in killing him or anyone else involved in the sacrilege. Alcibiades sought asylum in Sparta, where he became a military advisor in Sparta’s wars with Athens.

This, incidentally, is an attitude the Greeks share with many traditional African cultures, as well as Maori culture. To Western eyes, the exaggerated depictions of male genitalia in statues and carvings from these cultures can seem obscene. To these cultures, I imagine the tendency of Western sculpture to minimise or hide the male parts, would seem equally obscene.

It was only with the advent of Christianity, and its dim view of the human body, that Greek and Roman attitudes toward nudity changed, and then quite drastically. Now, it became a matter of religious fervour to deprive statues of their male parts – which is why very few of them survive intact.

Nudity did not completely disappear from Western art during the Middle Ages, but it was now usually limited to the depiction of sinners in hell, or of certain biblical scenes: Adam and Eve covering themselves in fig leaves after eating that apple, and – interestingly – Jesus at the cross (to better show off his wounds). He did keep his loincloth.

The Renaissance brought a revival of classical themes in art, and a revival of nude sculpture: but now they generally covered themselves, be it with the proverbial fig leaf, or with cunningly placed folds of cloth or parts of branches.

Michelangelo, with his Florentine David, is the most prominent exception to that rule. Queen Victoria, who took great exception to the idea of nude statues, had a special plaster cast fig leaf constructed, which would be hung on the copy of Michelangelo’s famous statue at the Victoria and Albert Museum in London whenever the Queen visited.

The right of artists to publicly display images of nude bodies continues to be a contentious issue. Generally, such depictions are considered to be appropriate only for “mature audiences”. Film advisory boards give ratings that are based, among other parameters, on the amount of nude flesh that is being shown (though not all nude flesh is created equal – female full frontal nudity is often permissible where full frontal male nudity is not).

The practise has bled over to the internet: art sites like DeviantArt require submissions to state if they contain “mature content”, so that they can be filtered out.

“When we discuss mature content we are specifically referring to deviations which contain images, subject matter, or other themes which some viewers may find offensive, distasteful, or otherwise undesirable to view or to read. The most common ‘undesired’ viewing material may include, but is not limited to, images containing artistic nudity (see details below), large amounts of simulated blood and gore, or generally violent themes.

DeviantART strictly prohibits the submission of materials classified as pornographic or obscene. There is no exception to this prohibition.

Censorship of images has been much on people’s minds this last week. My Facebook feed is full of fellow illustrators declaring that they are Charlie.

I regret the shootings in Paris, of course – just as I regret any of these all to frequent occurrences we read about in the news, whether they target female engineering students, elementary schoolchildren, blondes someone cannot get laid with, customers of a Jewish supermarket, or indeed cartoonists.

Where I have difficulty following the general public debate, though, is determining why I would accord the death of said cartoonists a larger tragedy score than all those other senseless, hateful deaths. Or why this attack, in particular, would be a lethal blow to the principle of free speech.

I am not familiar with the Charlie Hebdo magazine, or its particular brand of satire. I have looked up some of their cartoons on the internet, and they strike me as unfunny and often indeed obscene. I don’t condone shooting people over a picture, but I also feel uncomfortably reminded of certain cartoons depicting stereotyped Jewish people which were popular in the early parts of the last century, in Germany and elsewhere.

Germany, for good reason, places a strong emphasis on the right of free speech and on protecting a free press – precisely because of its fascist past. For the same good reason, cartoons depicting Jewish people and aspects of Jewish faith, in a manner similar to the way Charlie Hebdo depicts Muslims and aspects of Muslim faith, are outlawed in Germany. We do not wish to see history repeat itself.

But this last week, I have come to the panicked realisation that even some of my good friends will blindly follow a rhetoric which under the guise of promoting a core Western value like free speech, is sanctioning the right to deliberately and systematically offend members of another culture and religion. How this is supposed to contribute to a better world, I really do not know.