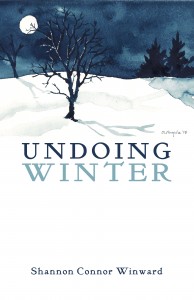 No, no round up for today. Maybe I’ll do it next week or the week after. I realized that it hasn’t been quite 2 months since I did the last one. But I have quite a lot of things up my sleeve these days, which is also why I’ve been posting (basically) weekly, instead of biweekly, in October. I don’t think I can keep it up forever, but for a little while, I’m looking forward to giving you more to read!

Today, I’m bringing you a review of a fabulous little chapbook written by Shannon Connor Winward: “Undoing Winter”. Shannon “is an American author of literary and speculative fiction and poetry. Her work has appeared widely in such venues as Pedestal Magazine, Flash Fiction Online, Strange Horizons, Illumen, Ideomancer, Silver Blade Magazine, NewMyths.com, Star*Line, Hip Mama and PANK, as well as in genre anthologies on both sides of the Atlantic. Shannon recently earned Honorable Mention in the L. Ron Hubbard’s Writers of the Future Contest for short fiction, and as an emerging artist in literature by the Delaware Division of the Arts.” (From her website)

This chapbook is probably the least speculative of all so far (although you might remember that John W. Sexton’s The Offspring of the Moon and Sandra Kasturi’s Come Late to the Love of Birds aren’t really genre). I believe it is worth including here simply because it is of such high quality and Shannon’s body of work tends toward the Speculative. Several of the poems of a more speculative nature have been previously published in the magazine Pedestal Magazine, Ideomancer and The Magazine of Speculative Poetry, so who am I to deny it a space here?

The thing is, more than a third of the poems have no speculative element whatsoever (granted that’s only 4 poems) and the rest touch on a trope or speculative element, but are not really SF poetry in any strict sense. But who cares, right? These poems tickle my genre bone, so to speak, so I am satisfied. 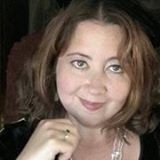 There are three poems included, which are about parenthood/motherhood or pregnancy. These are intensely personal but they express insights in such a beautiful and unexpected way. And that’s what makes this great poetry. It’s like blinders being taken from my eyes.

shift loose from their foundations

in an arch that curves over

There’s subtle humor as well. Well, it made me laugh out loud with recognition!

but you come equipped with your own artillery

good for a sniper shot to the face

or Pollock patterns of violent yellow

on the bathroom floor.

– from “On Raising Boys”

And there is the raw pain of motherhood or which could come from any relationship really:

for your keys in the door

your steps in the hall

She buried her worry under pillows

in a quiet house

but she found clean this for me too

in the room where she

where she builds her courage

The most speculative of the poems are “Session”, “Gravity” (although it lacks narrative), “Beansidhe”, “Moonsong”, “Undoing Winter”, “I Visit Your Heart” and “Warren”.

“Session” describes a dream, in which she is overseeing a forensics team unearthing bodies – all her, in various iterations. There’s an intense longing to be seen, really seen, if only (or especially?) by oneself. You can read it on Pedestal Magazine.

“Gravity” is a brief poem with a fabulous last line. Listen:

“Beansidhe” is the story of a misunderstood Banshee. There is an unfathomable gulf that separates her from the object of her longing. She insists that they have it all wrong, that she would never do what they insist banshees do, she is loyal and it is her lover who does the haunting.

“Moon Song” describes the power of song or singing. Beware!

I am so grateful for Shannon’s discussion on her blog of the title poem, “Undoing Winter”. I hadn’t figured out that it was the story of Demeter and her daughter Persephone before I read her post about it. Despite not “getting it”, it was no less powerful a poem. Persephone has been dragged into the underworld to be with Hades and Demeter can’t abide with that and lets the world languish in unending winter. Demeter, come to retrieve her daughter, finds her apathetic and depressive. As only a parent or a Bestie can do, she tells her to pull herself together and come along – this is no place for her.

“I Visit Your Heart” and “Warren” have some fantastic elements, but they are pretty much metaphorical. Great poems though!

The last poem in the collection, “Warren”, describes the knights that live in her heart. They represent the universal pain that we all carry in our hearts.

Many of the poems in this volume go to very dark places that many of us would rather not look at. And yet, I found them to be hopeful in many ways, returning to the light from the depths of despair. The poem “Undoing Winter” embodies that idea probably most outright. 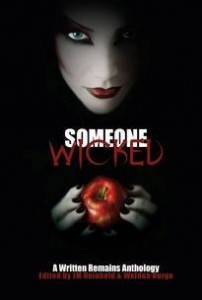 To the left you can see the cover of Someone Wicked: A Written Remains Anthology in which she has a short story called “The Devil Inside”. Shannon also has stories coming out in Spinetingler Magazine and Stupefying Stories, and spec poetry forthcoming in Scheherezade’s Bequest and in Kaleidoscope Magazine (a journal put out by United Disability Services that explores the experiences of disability through the arts).

If you are anywhere near Newark, Delaware, USA you can hear Shannon read in a few events, the details of which you can find on her website: Upcoming Events