The comic book Wolfenstein issue #1 breathes new life into the classic first-person shooter game by reaching an even wider audience through this graphic format. 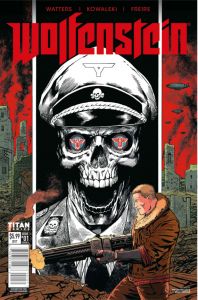 I’ve played a number of variations of the videogame Wolfenstein many times over the years. It’s one of those comfort games that improves over time, even though the original still holds strong with the classic graphics. So, any attempt to bring the popular story outside the familiar gaming format should and will be heavily scrutinized.

The comic book Wolfenstein issue #1 is out this month from Titan Comics, and boy did they hit the ground running. Breathing new life into the classic first-person shooter game, the story reaches an even wider audience through this colorful graphic format. Not only does the artwork look crisp and spectacular, the crux of this tale is a fully developed backstory that is as entertaining as it is informative.

We get to see what went wrong and where all of those mutated creatures came from. But more importantly, the characters are all well developed and fit nicely in the Wolfenstein world. From hardened war leaders bent on grabbing every possible weapon or technology, intelligent scientists making unintelligent decisions, and compassionate heroes fighting for the greater good, the fast-paced game we played for so many years comes to life in print.

The list price may be a tad more than your standard comic issue, but the robust first issue has about 50% more content than usual. But even with this longer format, the story goes by quickly and we are still left with a cliffhanger.

The all-star team collaborating on the impressive graphics behind this issue to go along with the loyal writing of Dan Watters (Assassin’s Creed, Dark Souls, The Shadow) is quite extensive. The artwork is provided by Piotr Kowalski (Age of Ultron, Sex, The Steam Man) and Ronilson Freire (Green Hornet, The Mummy: Palimpest) while the colors were added by Brad Simpson (Sex, Godland) and Greg Menzie (Magos). The rest of the team includes letterer and editor Jonathan Stevenson (FutureQuake) and art assistant Luke Kemp-James (The Lost Fleet).

Wolfenstein #1 may not give readers the same anxiety as the first-person shooter experience of the videogame, but the overall graphics and story are sure to keep you absorbed in the journey. It’s kinda like looking over your friend’s shoulder as they play the game. Go ahead. Take a peek. Issue #2 comes out in October, so you’d better jump in while you can.

Mystery molecules in black hole winds may have been born there