Home Science Amazingly Enough: Lost And Found – Down The Drain

Sunglasses, wallets, phone chargers … stuff goes missing all the time. But misplacing a set of car keys is one thing but it’s quite another to lose a body of water … and even stranger when it comes back, and yet doesn’t.

It’s not like vanishing lakes are rare – it actually happens more often than you might expect. Sometimes their going bye-bye is just a fact of life for their kind: feeding rivers or streams dry up, leading to the same for the poor lake. In other situations the opposite is the case: a river gets so frisky that it overwhelms and then completely swallows one.

Then there are the bodies of water that disappear, sucked straight down into the earth. Lake Beloye, in Russia, for example, back in 2005: here one day, gone quite literally the next. The leading theory being that the lake drained into a underground natural lake or cave system. 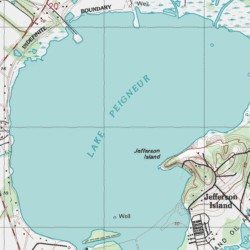 But what happened to Lake Peigneur, in Iberia Parish, Louisiana, is far from natural – but also incredibly, wonderfully, bizarre.

It all started in 1980, when a Texaco drilling rig … well, actually that’s not exactly how it all began. For that you need to jump back several years before, when a different company was looking for a different natural resource. You see, before Texaco was drilling for oil, the Diamond Crystal Salt Company was digging for … you guessed it: salt. 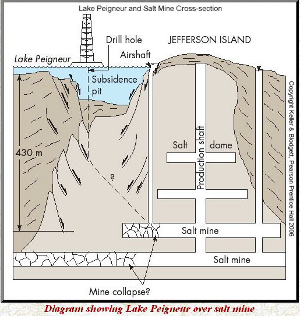 The problem though is that the folks punching holes in the earth to look for crude didn’t take into account the people who’d been chewing tunnels in that same earth looking for salt. In November of 1980, the drilling rig punched a hole in one of those old salt tunnels … and began the destruction, and subsequent weird rebirth, of Lake Peigneur.

It was, by all accounts, quite the sight: beginning slowly at first, the draining of the lake began to pick up alarming speed as the water ate away more and more of the old salt mine, turning a moderately fast downward torrent into an all-consuming, totally-devouring, massive whirlpool. 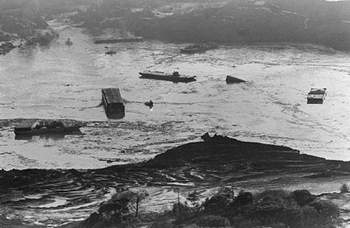 I don’t use “all-consuming” lightly: as the millions of gallons of fresh water that had been Lake Peigneur flowed into the near bottomless recesses of the salt mine, the flow tore up the lakebed and the surrounding shore, pulling in along with the water and mud not just that aforementioned Texaco drilling rig but also eleven barges … there one minute, gone the next. In addition to all this equipment, over 65 acres of nearby terrain was sucked in right along with it. 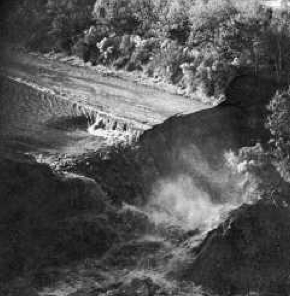 Just to give you some idea of how fast and furious this whirlpool was, the Delcambre Canal, which normally flowed out of Lake Peigneur and into Vermilion Bay, temporarily became the tallest waterfall in Louisiana as the water rushed back into where the lake had been. Adding to the sight were the geysers that erupted out of the old mine shafts – some spraying over 400 feet into the air. 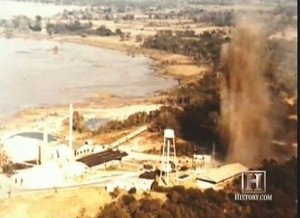 Luckily, no one was killed – the training of the drill workers serving them well. It also gave local fisherman Leonce Viator quite the story to tell as he barely managed to get his own boat to shore, narrowly avoiding the fate of those eleven massive barges. Oh, and speaking of those same huge pieces of equipment, nine of them popped back up out of the mine a few days later … the remaining ones staying trapped down there, somewhere.

So, just like that, Lake Peigneur was gone: completely vanishing into the earth – that is until it returned from its watery beyond … sort of.

You see, Lake Peigneur returned – but where it had been a fresh water lake the new lake was a salt water one.

While the mine that had been the recipient of the old Lake Peigneur had been a salt one, the real change was due to the reversal of the Delcambre Canal, which used to feed out into the ocean but after the vanishing of the old lake became a salt water feed into the space the old lake had occupied.

Just like that – well, over the space of quite a few days – that massive body of fresh water had not just disappeared, never to be seen again, but it had been replaced by a fresh water doppelganger, leading to a complete change of ecosystem: new birds, fish, plants … Lake Peigneur came back, though not the lake it had been.

Things get lost all the time, and – luckily – sometimes they get found again. But rarely, like with Lake Peigneur, they come back … changed.

(Ed. Note: A short segment of a History Channel documentary on the Lake Peigneur disaster)