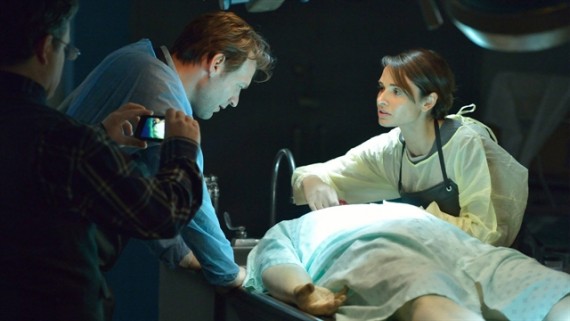 If The Strain were a song, it would be so, so frustrating. Right in the middle of a great chorus or awesome solo someone would hit a wrong note, break a string, forget the lyrics and the whole thing would careen around sloppily until the band found the melody again. “It’s Not For Everyone” is one such song, where terrific sequences butted right up against some awfully flat notes.

The episode picks up just moments after the last one ended, when Goodweather smashed into a cratered, wet mess the skull of the Aegis Air pilot-turned vampire. Goodweather, Kent, and Martinez quickly realize that their best defense against murder is to establish that they didn’t kill a man, but a monster—which requires an autopsy. And that’s pretty terrific: the chance to root around in one of these vampires’ guts promises not only some useful detail about the creatures, but also to deliver the visceral gore the show has enjoyed embracing.

But just as the trio prepare for the investigation … we cut away to another story. In this case, the domestic blood-strife of Ansel Barbour, the Aegis Air survivor who slurped down tomorrow’s meat as a midnight snack last epiode. When his wife takes the kids to the relatives to keep them safe, Ansel convinces her to leave the dog to keep him company. Company, in this case, meaning his next meal. Since we know with great certainty what’s going to happen to the dog, why bother to play this so-frequently sounded note?

One running source of tone-deafness has been The Strain’s discussions of technology, especially the Internet. In this episode, the head of the Stoneheart Group, Eldritch Palmer (which is also a pretty weird: first of all, who would name their kid “Eldritch?” Secondly, do Del Toro and Hogan really think they’re slipping some sly Philip K. Dick reference past us?), informs us that in the wake of the Aegis Air situation “the online community is up in arms about corporate greed and corruption.”

Let’s unpack a couple of things here: first, “the online community”? In 2014, is there honestly anyone who conceives of all Internet users as a single community? Second, since when is outrage over corporate greed and corruption on the Internet a cause for concern by anyone? Half of the Internet’s current function is to foment fiery outrage that is quenched through cute cat photos and Kardashians. Corporate titans should tremble.

Later in the episode, the Internet going offline is described as “the top seven Internet servers have gone down,” which, while close to how you might take down the majority of the Internet, isn’t quite the correct way of describing it. If The Strain makes it to a second season, they might want to get a staff writer whose formative Internet years weren’t spent on AOL, or at least a technology consultant to keep these clunkers from echoing out each episode.

But then that pleasing tune—the autopsy—manages to clamber up above of the din. Goodweather and team find one intriguing surprise after the next in the opened body: vampires have cloaca, which explains the lack of external genitals; their human internal organs dry up (though this prompts Goodweather to describe, very scientifically: “the heart is all shriveled up.” I’m sure your med school professors are proud); the vampire virus creates new organs in the throat that propel the proboscis; best of all, Goodweather pulls the proboscis, foot after foot after heavy foot of the thing, out of the vampire, revealing a sloppy, six-foot tube of meat. It’s a terrifically gross scene, where the tongue’s weight is palpable, and also terrifically fun.

Just when the autopsy is getting really good, we’re back with Ansel Barbour, who, surprise, has eaten his dog. Barbour, however, recognizes the threat he poses to his wife and has chained himself in the backyard shed to protect her. While that strikes too much of a zombie chord, it could be forgiven—except for what comes next. Barbour’s wife is perhaps a bit mentally ill, certainly she’s very anxious, and also very religious. That religiousness (crosses in the house and prayers in the backyard), turns out to not be very powerful. When an encounter with a meddlesome neighbor reveals that the man had once hit the now-dead dog, Barbour’s wife locks the man in the shed with her hungry husband. Now, animal abuse is disgusting and I might not be too upset about the people who commit certain acts of it being killed, but this is completely out of scale for hitting a dog one time.

The episode ends on another false note, this time involving Setrakian. When Goodweather and Martinez head to the French father’s house to see whether his daughter has transformed the way the pilot did, they’re confronted not only with a cute little vampire made of sugar and spice, but also with her vampified father. Just as the fangy pair close in, Setrakian appears, literally out of nowhere, to slice the heads off both creatures with his sword-cane. As was telegraphed in the first episode, The Strain desperately wants us to feel that Setrakian is some kind of badass, practically begging for him to become a fan-favorite character (which isn’t totally impossible; he’s one of the few characters with any defining personality). But god is that boring. We’ve seen this kind of grizzled veteran, this badass who knows just what to do despite an outward appearance that says otherwise, dozens of times in works across many genres. Like the scene in which we know Barbour is going to eat his dog, there was never any question about whether Setrakian would reveal himself this way.

To hammer on the music metaphor one more time, it’s like The Strain is a Beyonce concert and Setrakian is Jay Z, lurking offstage so he can surprise us with a cameo that every person in the arena knew was coming before the show started. If it’s the first time you’ve seen this “surprise,” it’s exciting. But if you’re in the crew and see it happen every night, as the audience for The Strain is, it just falls flat.

When SF makes sense of the World