The third time isn’t quite a charm for the first season of The Strain, but in its third episode the series shows its first signs of promising life. 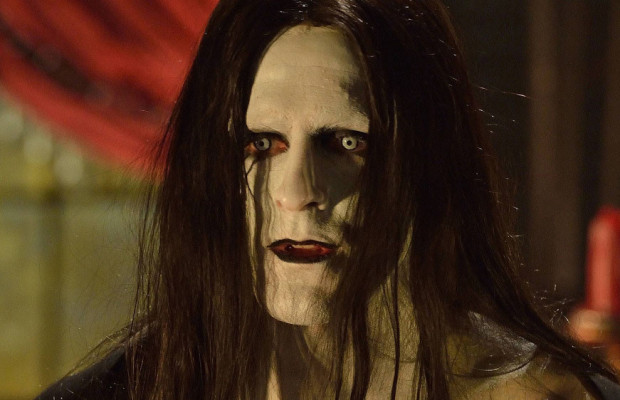 The third time isn’t quite a charm for the first season of The Strain, but in its third episode the series shows its first signs of promising life, signs that come in the form of four powerful horror images.

The first of these is the episode’s first scene, in which a decayed, splotchy-skinned vampire sits in front of a mirror. He’s bald, his nose shorn away, mottled scars on his neck, complexion pallid. This is our first head-on view of the true face of a vampire in this world and it’s appropriately ghoulish, conveying the horror of being—and, as we’ll see later, becoming—a vampire. The vampire then assembles a human face over his true, bestial one. He fits a false nose over the ragged space in his face, affixes sheets of false skin, inserts dentures, and finishes with an application of makeup, completing his convincing impersonation. The frightening creature is revealed to be the frighteningly composed Eichorn, who heads into the day with a jaunty application of a lint brush and the portentous words, “Soon, no more charade.”

Two other effective moments are things that Eichorn must have once experienced (decades ago, if not longer). The first comes as we follow Aegis Air survivor Ansel Barbour as he struggles through hollow days with his family. He fights headaches and bloodshot eyes, beating back the drone in his ears that all infected survivors have. He shambles through his house, until one hungry night, he heads to the fridge for a late snack. Waiting there is a cut of meat, marinating in its juices. Without hesitating, he slurps down the sloppy blood and raw meat as a quick, ravenous meal. Traces of watery blood trickling down his cheeks, he feels great. The proto-vampire-eats-raw-meat trope isn’t especially new (the third pleasing sequence is also overly familiar), but a pair of details that make this scene effective. First, the camera lingering on his pale cheeks, the rivulets of blood on them. Second, and more powerful, is the revelation that this didn’t happen in secret: His wife saw the whole thing. She looks at him with wonder, actress Alex Paxton-Beesley’s face describing not so much shock as the total inability to process what she’s seen, as though trying to read an alien language. The camera stays on her face a few beats longer than you’d expect and in those beats her bafflement feels real.

While also registering as a seen-it-before vampire-movie trope, health inspector Vasiliy Fet has an encounter with the changing face of New York. On his way out removing a rat from a luxury highrise, he notices another rat scampering down the street. As he follows it, more rats head the same way until we see hundreds of rats spilling out of a sewer pipe, getting off the sinking ship that is Manhattan. The rat exodus is far from original to The Strain, but seeing something so low key, something that suggests the small, but profound, transformations occurring beneath the surface of the quotidian world, creates a pleasing atmosphere of unease.

The last, and most shocking, of the effective sequences in “Gone Smooth” explains the title. Goth rocker Gabriel Bolivar is coming apart—he can’t sing, has lost most of his hair, and something’s gone pretty wrong with his crotch. He find out just how wrong when he pees. The sound begins as the familiar jet of fluid into water, but is quickly punctuated by a heavy plop. With barely a change in expression, Bolivar flushes the toilet. He turns to the camera to confirm what we may suspect: that plop was his penis falling off. We see his crotch, as smooth and featureless as a Ken doll’s (these vampires are no objects of romance). Not only is this likely to be distressing for a lot of the male viewers, but it also effectively conveys the horrific reality of the early stages of the transformation that lead to the monstrous Eichron from the opening scene.

The episode isn’t all good. We waste more time with Goodweather’s tedious custody battle (newflash: he loses) and are subjected to more rote bureaucratic CYA (at one point, Setrakian lets us know that vampires “thrive on bureaucratic complacency”; apparently vampires are the monsters that ensure good governmental administration?). The episode also lacks a clear theme. All the characters’ stories are pushed forwards, and there’s a sense that we’re heading towards some crescendoes, but while the episode feels like a component of a larger whole, it but doesn’t quite cohere enough to stand on its own.