Home Film/Televison The Best Doctor Who Doctors of All Time 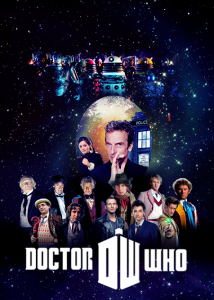 This past weekend we witnessed the first full length appearance of the latest regeneration of the amazing Doctor Who. Whovians everywhere gathered around the set to watch the newest storyline unfold. The show did not disappoint.

In case you are just joining us, Doctor Who is a science fiction television show that originated in 1963. The show celebrated its 50th Anniversary last year, and this year welcomed its twelfth different actor playing the role of Doctor Who, the lead character in the ongoing story.

The twelfth Doctor is portrayed by Peter Capaldi. Peter’s work was unknown to me until I settled in to watch the BBC television show The Musketeers. In the show, Peter plays the infamous Cardinal Richelieu.

His portrayal of the musketeers’ archenemy is powerful and gripping. He has a way of stealing every scene with his strong screen presence.

The latest Doctor Who has only barely graced our small screens, but I foresee great things for him. Certainly he will one day be considered a top ten Doctor, and perhaps if the story matches his talent, Peter Capaldi will even make his way into the top five.

With the idea of ranking Doctors dancing in my head, I thought it time to organize the first eleven Doctors into a well-ordered hierarchy. What follows is my ranking of the best Doctor Who Doctors of all time. I hope you enjoy.

Tom Baker was my first Doctor. He provided my window into this 800 plus episode exploration of time and space. He remains perhaps the most iconic doctor of the series. He carried the series through the height of its popularity before the latest generation discovered the series. Tom Baker starred in more episodes than any other doctor. The Fourth Doctor is the benchmark for measuring all others.

The long darkness without Doctor Who was ultimately overcome with the coming of the Tenth Doctor. David Tennant stepped into the role and took it to new heights. His depth of character and humanistic side provided the audience with new character traits to latch onto. His largely cheerful personality mingled with his romantic side to push the series to its rediscovered popularity. Thanks to David Tennant, Doctor Who finally made his triumphant return.

The Eleventh Doctor took over the franchise at the time the series had at last returned to the summit. Many feared that the empire would come crashing down around him, but Matt Smith made it work. He not only made it work, he made Doctor Who his own. He masterfully blended aspects from all the previous Doctors into a believable incarnation that left Whovians wanting more.

Giving a shout out to my cuz, the legendary Patrick Troughton. Many credit his portrayal of Doctor Who for saving the series from extinction. The Second Doctor was the first regeneration and required the audience to buy into the concept put forth in the show. His amazing ability to blend his own traits with those of the First Doctor made the transition seamless and believable. Every Doctor since Patrick has adapted his technique for transitioning between actors. Rumors persist that the reason so many of his episodes are lost is because they exposed too many of the true secrets of the universe. I expect they are all waiting to be discovered inside the hidden vault of an unnamed secret organization.

The true rebirth of the Doctor occurred when Christopher Eccleston stepped onto the set. His regeneration marked the return of Doctor Who and brought with it a hard, gritty Doctor that had an edge to him. The Ninth Doctor introduced an entirely new generation to the amazing character. The Ninth Doctor convinced them to tune in and keep watching.

Jon Pertwee graced the first color episodes of Doctor Who. Along the way he managed to bring the character into vivid color with his dashing depiction. The Third Doctor was a man of action and intellect. He helped attract hordes of new Whovians to the cause.

The Fifth Doctor had big shoes to fill when he arrived on the set. He was easily the most handsome Doctor to that point, and the audience needed some time to adjust to both his appearance and his twist on the Doctor. Perhaps the Fifth Doctor had the most unenviable timing of all the Doctors.

He started it all. If not for health issues, he may have lasted longer than three years before regeneration. He forged the way for all others. William Hartnell had the unenviable task of finding the way with no detailed backstory. How different would each Doctor be if they had no previous Doctors and episodes to draw from? Would they have been able to achieve the level of excellence they did?

The Eighth Doctor only appeared in one episode in a made-for-TV movie. Paul McGann’s portrayal paid homage to the first era of the Doctor while leading the way into the next generation. Fittingly his appearance occurred nearly half-way between each era of the show.

The Seventh Doctor appeared as the looming black hole was out on the event horizon. McCoy barely had the chance to put his imprint on the Doctor before the curtains closed. His thoughtful approach to problem solving promised great depth. If he had appeared in a different era of Doctor Who, he might have achieved much greater things.

Many consider the Sixth Doctor to be the least likable of all regenerations. His arrogance and blinding wardrobe made him difficult to watch. The Sixth Doctor started the slide into darkness for the series. Colin Baker put his heart into the show during its most difficult stretch.