Home Review Review: The Dark Between the Stars By Kevin J. Anderson

Most readers of Amazing Stories are familiar with and appreciate the works by author Kevin J. Anderson. Not only do his books often cross the cavernous library of various genres covered on this website, he does not shy away from returning to previous works that have garnished his success. 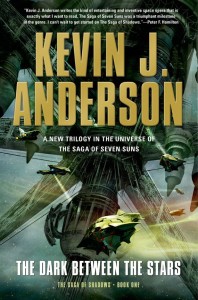 The Dark Between the Stars is “book one” of Anderson’s latest chronicle The Saga of Shadows (first mentioned here at Amazing Stories in a January 2013 interview by Adam Gaffen). Once again delving into the galactic struggles familiar to the fans of The Saga of Seven Suns, a new story emerges. Released earlier this month by Tor Books and bulking out a little under 700 pages, readers can expect the same dedication and thoroughness as the book’s predecessors.

This time around, we rejoin the narrative a couple of decades following the elemental war (the conflict that The Saga of Seven Suns revolved around, involving humans and other species such as the Ildiran Empire, the hydrogues, the faeros, the wentals and the verdani). When the high-tech research ship Kolpraxa captained by Tal Gale’nh is sent out past the Spiral Arm and discovers what appears to be an expanding dark nebula, the fate of the galaxy is again in peril.

Science fiction turns to horror as readers are introduced to the archetypical fear of the unknown. We have always been told to be afraid if the dark. As the title implies, it turns out that the new enemy is the dark between the stars. “It was . . . alive somehow. It was darkness.”

Anderson’s vast yet concentrated character lineup is a warning that this saga will compete with the original in expansiveness. As each new chapter is titled after the specific character of focus, the author displays a confession of the importance of character development. The detailed glossary in the back of the book will be a constant companion as you dig into this meaty space opera (and necessary if you hope to follow every plot line).

Not to be outshined by all of the names and faces, the in-depth settings and visually enticing world building gives credence to the story Anderson is presenting here. The reader will be left with a clear image of these new worlds. In the tradition of classic science fiction, this future is as lucid as it is frightful.

Loyal fans are sure to welcome the return and embrace the author’s dedication to this encompassing story. But those unfamiliar with the series may be intimidated by the book’s mass and complexity. Even so, if you’re a fan of Kevin J. Anderson and still new to the Seven Suns saga, The Dark Between the Stars is a good stepping-in point to begin experiencing this action packed galaxy.